Why Online Ordering Is Huge for the Restaurant Industry

Why Online Ordering Is Huge for the Restaurant Industry 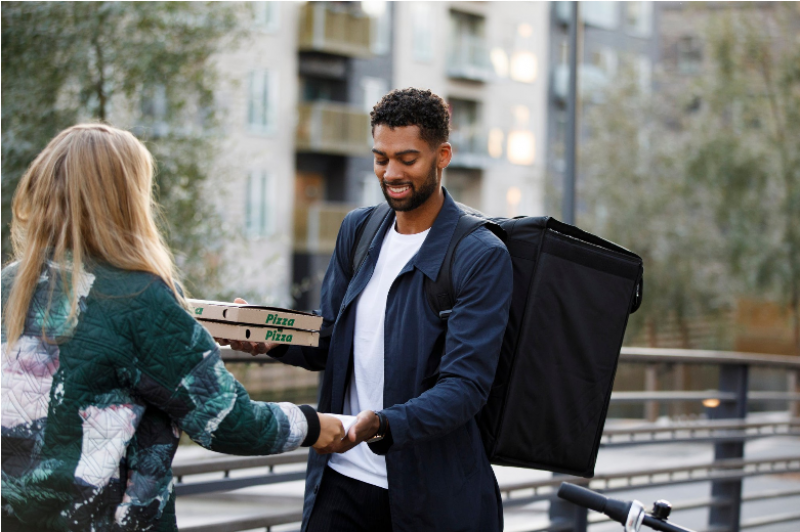 Domino's (NYSE:DPZ) was a revolutionary company in the restaurant industry. Founded in 1960, the company had no restaurants where you could sit down -- Domino's had a kitchen and that was it. The pizza would be delivered to you.

At the end of the 20th century, another revolutionary company was born, one that would radically change the retailing industry: Amazon (NASDAQ:AMZN). This company also had no physical store that you could visit. Instead, you would go online and shop on the company's website. At first, all you could buy were books. And the books would be delivered to you.

What do Domino's and Amazon have in common? Delivery. The key innovation is that you don't have to leave your house to shop. You order things online, and they are brought to you. And consumers seem to love this arrangement.

Delivery is transforming the restaurant sector

Now we are seeing a whole bunch of companies, like DoorDash (NYSE:DASH), Uber Eats, Postmates, and Grubhub (NYSE:GRUB), vying to be the Amazon of the restaurant industry. All these companies want to be that one internet location where you go to find food. These websites are the digital equivalent of visiting a food court at a mall and picking a restaurant.

Internet restaurant delivery is a huge challenge. Even Amazon didn't try to pull this off. Amazon is happy if your stuff is delivered in 24 hours. But food gets cold quickly. So it has to be delivered fast. Domino's set the standard many years ago with the goal of delivery in 30 minutes or less.

A few years ago, SeeLevel HX, one of the largest mystery-shopping outfits in the country, did a secret speed test with all four delivery companies. A total of 1,400 sleuth shoppers in five cities (Atlanta, Boston, Chicago, Dallas and Los Angeles) ordered food to be delivered. According to SeeLevel HX, Uber Eats won the speed test.

Olo is the software stock for online ordering at restaurants

While these restaurant-delivery stocks may or may not be good investments, I think the company that will profit the most from this shift to restaurant delivery (and takeout) is Olo (NYSE:OLO). The company's name actually stands for On-Line Ordering. And the analogy I would make with Olo is not Amazon but Shopify. Shopify is not a retailing website. But it's been a huge success story offering backend solutions to retailers who want to sell things online.

That's what Olo hopes to do in the restaurant industry. Unlike DoorDash and the other food delivery outfits, Olo is not a food-ordering website and has no interest in being like Amazon. Instead Olo's solutions will help all the giant restaurant chains (and the mom-and-pop restaurants) shift to online ordering for delivery and takeout.

This is highly popular with restaurants that want to manage the customer experience themselves. Olo partners with DoorDash and Uber Eats, and it also helps restaurants that want to handle delivery on their own. Olo has won a lot of big-name restaurant clients, including Five Guys, Chili's, Subway, Applebee's, Cheesecake Factory, Jimmy John's, Wingstop, Cracker Barrel, Showmar's, Qdoba's, Denny's, IHOP, and Shake Shack (NYSE: SHAK). Outback Steakhouse, owned by Bloomin' Brands, recently tore out its in-house software solution and started subscribing to Olo instead.

The restaurant sector is ginormous

In the company's S-1, Olo estimates its total addressable market (TAM) in the U.S. is $20 billion. And the company says there are roughly 700,000 restaurants in the U.S. (Olo has captured about 10% of this market already.) If we divide $20 billion by the number of U.S. restaurants, we see Olo's math as it estimates its TAM -- each restaurant will pay an annual fee to Olo of around $28,000 a year. (Some of this is transaction revenue, and Olo does not disclose its pricing structure.)

Maybe I'm wrong, but I think Olo is low-balling its worldwide market opportunity. In their S-1, the company says the rest of the world is "at least as big" as the U.S. market. So the company doubles their U.S. market estimate and gives us a $40 billion opportunity overall. Right now, Olo is focused on the big restaurant chains in the U.S. -- the enterprise customers. So they're not really thinking about the foreign opportunity.

If we are cautious and say maybe there are 10 million restaurants, bars and coffee houses in the world that might adopt Olo's solution, at $28,000 per year (cheap for what this company is providing), the ultimate TAM number I get is $280 billion in annual revenues.

Olo is a tiny company right now, with just $100 million in revenue and triple-digit revenue growth. But if Olo becomes the Shopify equivalent to the restaurant industry, its stock is going to generate fantastic returns for early investors.

This article represents the opinion of the writer, who may disagree with the “official” recommendation position of a Motley Fool premium advisory service. We’re motley! Questioning an investing thesis -- even one of our own -- helps us all think critically about investing and make decisions that help us become smarter, happier, and richer. 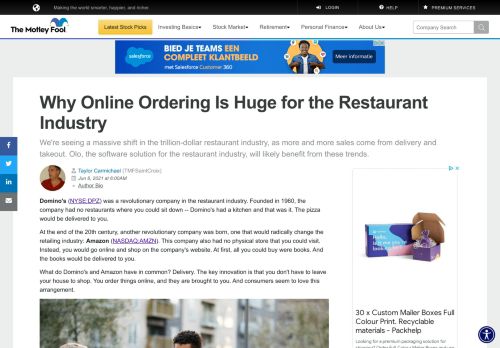 This article has been aggregated from www.fool.com and they maybe/are the copyright owners of the same. If you are the Author/Copyright owner of this article and want us to remove the same then send an email to admin@blog.restaurant so that we can delete it immediately. We sincerely regret and apologies for any inconvenience caused to you due to the same. Though it is your decision but please take note that the link to your website and the article have been given above, within and on the bottom of the article.