What happens when a Toronto restaurant blows up on TikTok

What happens when a Toronto restaurant blows up on TikTok 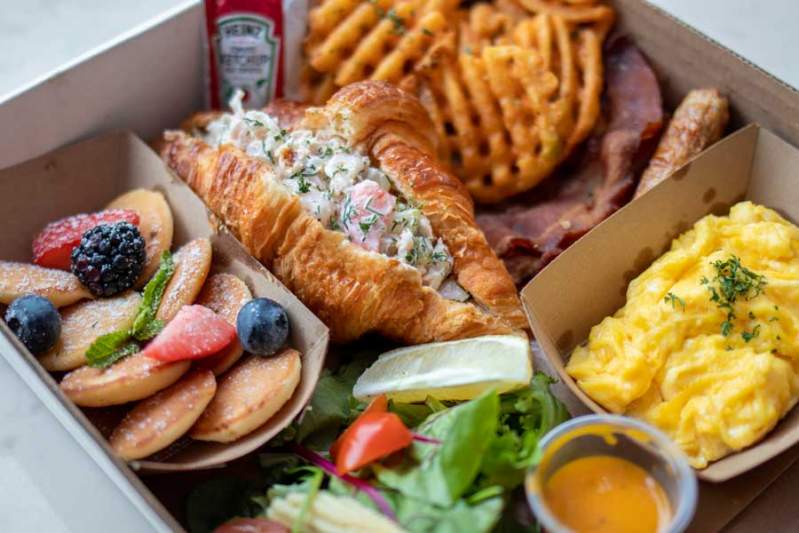 With restaurants struggling during lockdown, the social media app is creating dining destinations

Would you travel far and wide for a dish described to you in a robotic text-to-speech voice? Does your platonic brunch come in a pizza box? Have you tried every birria taco in town?

If so, you’ve probably spent some time on Toronto food TikTok.

The ultra-popular social media app and short video platform has a big handful of local creators who travel to various restaurants in the city to make recommendations. For some spots, it’s making menus – or at least specific menu items – go viral. Search around and you’ll find recommendations for Korean rice dogs, mango desserts, all kinds of poutine and, of course, fried chicken sandwiches.

That’s been extra helpful for local restaurants during the pandemic. At a time when diners can’t eat in and foot traffic is greatly reduced, TikTok is drawing people back to restaurants.

One Friday afternoon early this year, the Light Cafe sprouted a huge lineup snaking across Baldwin Street. It was so busy, staff were overwhelmed.

“It’s unusual to have a lineup like that on a regular weekday,” says Jennifer Wong, a partner in the downtown Toronto cafe, which is a spinoff of the Light Cafe in Taiwan. “We’re usually more busy on weekends.”

She asked some of the customers what brought them there, and one of them showed her a TikTok video her daughter had sent her. A simple clip by a user named @cheekosfeet, the post was barely 10 seconds long: an establishing shot of their window and then a quick peek inside a pizza box arranged with scrambled eggs, salad, tater tots, a lobster croissant and a little stack of mini pancakes.

Light Cafe introduced the brunch boxes a couple of months into the pandemic as part of a new, more takeout-friendly menu. They sent it out to a few local influencers on Instagram, but months later this clip turned them into a trend. The user only had about 2,000 followers at the time (now they have over 11,000) but the video quickly went viral.

It inspired other TikToks that also blew up. Some raved about “Toronto’s famous brunch boxes,” others complained it was overrated or overpriced. Soon, other restaurants were selling brunch boxes and more TikToks sprouted up to rate them against each other.

The impact was more than anecdotal. Light Cafe, like so many restaurants, had to lay off half of their staff when the first lockdown hit, but the success of the brunch boxes allowed them to hire more people. The’ve introduced an online pre-ordering system to reduce wait times and crowding, but head over on a weekend and you’ll see people ordering the box, walking to their cars, then opening it up and filming on their phones.

“You can’t just pay to get popular on TikTok,” says Wong. “It’s like winning the lottery.”

Wong would know. She worked in advertising before going into the restaurant business and knows the trick to getting social media buzz on platforms like Facebook and Instagram.

Light Cafe’s food is designed to look good on a grid: croissants with cheese oozing over a wooden board, cotton candy coffee, heart-shaped charcoal black sesame waffles. She’s well versed in the strategy of comping orders for the right people.

There are TikTokers with big followings, but the majority of clips are seen on your “For You” page: the personalized discovery section that feeds you videos based on an ever-adapting algorithm. It’s based on what you watch and like, but it won’t just show you clips by accounts you follow. So it’s not easy to game the system.

Market Street Catch has been around since 2013, but the seafood restaurant next to St. Lawrence Market had a TikTok bump during the pandemic.

In January, a user named @bigbellymel zeroed in on the lobster grilled cheese. Her appetizing little clip, set to a Lupe Fiasco song, is what manager Jay Cox attributes to a burst in popularity for that decadent dish, bursting with lobster meat and oozing Gruyère cheese.

“Once it went viral, all these people started coming in saying, ‘Oh, we saw this on TikTok, can we try it?’” he says. “It’s kind of been the saviour ever since.”

The trick, he says, is recommending other items to try too: the shrimp po’boy, old-fashioned halibut and chips or, most obviously, lobster poutine.

“Right now, especially with the pandemic, there’s not a lot that’s bringing people joy,” he says. “People are going to their phones to find it.”

Comal y Canela had a pandemic-friendly model even before March of 2020. Already focused on takeout, it’s the kind of place that thrives on word of mouth. There’s a small, constantly rotating menu of Mexican food, each item made with traditional cooking methods from scratch in small batches so they can sell out of whatever they make.

But it’s a TikTok trend that’s made the spot at Jane and Lawrence busier than ever. Birria tacos – flavourful stewed meat in crispy fried tortillas that you dip in a bowl of consommé – are huge on TikTok. And Comal y Canela consistently tops lists of the best birria tacos in Toronto.

“I didn’t do it on purpose,” laughs owner Yasmen De Leon. “I didn’t even know what TikTok was. It was my nieces and nephews who showed me, like ‘Tia, look at this, you’re famous.’ I was like, ‘I don’t know what you’re showing me.’”

People travel far and wide to try the tacos  – though that was already the case for the off-the-beaten-path spot. Now, the buzz has spread even more.

De Leon says her goal was always to be “the best ‘blank’ in Toronto” for all of their specialties: carnitas shrimp, guacamole, etc. But the birria trend has shifted the focus a little bit.

It was actually the pandemic that forced the restaurant to solidify its menu and make the birria tacos a permanent item, so they lucked out. The trick was to figure out how to change their process to meet the demand without sacrificing their core values. The answer has just been a lot of work, constantly peeling peppers and cooking meat. But she says it’s worth it.

“The thing that I miss the most is the thing COVID has taken from me,” says the owner, who has also been running a weekly food bank for her neighbours out of the restaurant. “It’s seeing the joy people have on their faces [while] eating my food. Watching all the videos people are posting, it’s a blessing. It means they love the food.”

This article has been aggregated from nowtoronto.com and they maybe/are the copyright owners of the same. If you are the Author/Copyright owner of this article and want us to remove the same then send an email to admin@blog.restaurant so that we can delete it immediately. We sincerely regret and apologies for any inconvenience caused to you due to the same. Though it is your decision but please take note that the link to your website and the article have been given above, within and on the bottom of the article.