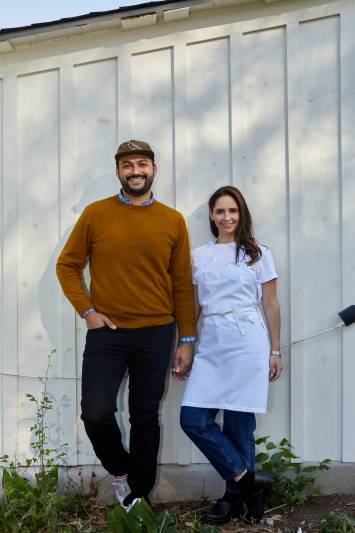 When chef Tracy Malechek-Ezekiel was thinking of opening a restaurant in Brooklyn seven years ago, the native Texan considered the name Lady Bird.

But when she and her now-husband, Arjav Ezekiel, relocated to Austin and decided to open a restaurant, the couple realized the name might not work in the land of the former first lady.

“We knew how many Lady Bird references Austin already had, and Birdie's seemed like a natural evolution of the name,” Arjav said. “We decided to abbreviate it to Birdie's to invoke the sense that you were walking into a place that belonged to someone. It felt and still feels (to us) like a name that's both nostalgic and familiar — like you're walking into someone's home who you've just met, but feel like you've known forever.”

Dining: Pitchfork Pretty, one of the Austin's best restaurants, is reopening this summer

The two hospitality veterans have both spent time working in notable New York restaurants, with Tracy serving as sous chef and Arjav as manager at the popular Grammercy Tavern, and met while working at United at the Whitney, the museum restaurant operated by Danny Meyer’s Union Square Hospitality Group for almost a decade.

Despite their fine dining pedigrees, Birdie’s will be a casual, counter service restaurant. Tracy has not finalized her menu but says diners should expect simple American cuisine that takes culinary cues from Italy and France. The wine list, overseen by Arjav will, like the food menu, take a seasonal approach that responds to Austin’s intense heat.

The restaurateurs say the menu will comprise “simple food you want to eat with wine” and half-jokingly speculate that great olive oil and vinegar, two of their passions, will probably account for a lot of their food budget.

The couple spent a year looking for spaces in Austin before signing a lease in February of last year at the 1,200-square-foot building with a backyard patio. Their first two years in Austin helped shape their sense of what they wanted Birdie’s to look and feel like.

“We kind of fell in love with the casual way people ate here and interacted with restaurants,” said Arjav, who worked as a server at Olamaie while they planned their restaurants.

The vibe remains: Renovated Butler Pitch and Putt reopens to the Austin public

“We wanted to open a place where we could drop in twice a week, a place where line cooks could go to, a place front-of-house people could go to, the kind of place a neighborhood could fall in love with,” adds Tracy, who picked up shifts in the front of house at Hestia and on the pastry team at Jeffrey's during their two-year run-up to Birdie's.

The New York transplants (Arjav is originally from Delhi and immigrated to Portland with his parents in 1999, and Tracy is a native Houstonian) recognize that opening a restaurant in a historically Black neighborhood in East Austin, an area rife with gentrification, requires a sensitivity to the current residents and to history.

Their landlords, pastor Arthur Anderson and his wife, Joyce Anderson, of Grace Fellowship Outreach Ministry, not only share a wall with the restaurant that will be located in the old Taco-Mex space, they have been integral in helping Tracy and Arjav navigate the coronavirus pandemic and learn about their neighbors and the culture of the neighborhood.

Dining: Austin restaurants that have opened since the start of the coronavirus pandemic

“We hope to do our best to honor and preserve that,” said Arjav, who intends to hold a couple of tables in their backyard space each Sunday for the church that has been serving the neighborhood for 30 years. “The first thing you do is be respectful to the people who are living there. I think we’ve done our best to get to know the neighborhood. It’s a challenge for everybody, and I’m sensitive to it as a brown man.”

“We don’t necessarily want to be ‘the hip restaurant.’ We want to build for the long term,” Arjav said. “We want to be around for 15-20 years, and I think everything we’re doing hopefully will tell that story. We want to do things that will last and establish ourselves as a restaurant that belongs to the neighborhood. And that takes time, for sure.”

When Birdie’s opens in June, it will initially serve lunch and weekend brunch, with wine and snacks in the evening, and the owners have plans to add dinner service a few weeks following opening. [birdiesaustin.com

This article has been aggregated from austin360.com and they maybe/are the copyright owners of the same. If you are the Author/Copyright owner of this article and want us to remove the same then send an email to admin@blog.restaurant so that we can delete it immediately. We sincerely regret and apologies for any inconvenience caused to you due to the same. Though it is your decision but please take note that the link to your website and the article have been given above, within and on the bottom of the article.