While members and guests of the Commodore Perry Estate — the historic mansion turned membership club and hotel — have been enjoying the food and drinks of the property since June, as of this week, the rest of Austin will have the opportunity to sample the exquisite offerings in equally as stylish surroundings. Lauded Austin chef couple Bradley Nicholson and Susana Querejazu mark their return to the city from San Francisco with the highly anticipated opening of high-end Texan restaurant Lutie’s Garden Restaurant in the Hancock neighborhood.

The 4100 Red River Street restaurant, which is operating as part of the Auberge Resorts Collection, has been open to hotel guests and private members since last week and will open to the general public on Wednesday, April 14, for dine-in services. Under executive chef Nicholson and executive pastry chef Querejazu, a 2016 Eater Young Gun, the menu at Lutie’s focuses on seasonal new American fare with a Texas focus.

The food at Lutie’s, as Nicholson describes it, is “a little bit more creative, a lot more of a reflection of what Susanna and I’ve been working on, based on Texas cuisines. There’ll be a nice mix of very simple things and then some things that are kind of flashy.”

But the pair still had eyes on Texas. “We always knew we were going to come back to Austin to settle down,” Nicholson says. They heard about the hotel project from a colleague during a visit to Austin from San Francisco nearly two years ago. “I didn’t really think much about it,” says Nicholson, “because I had never worked in a hotel before.” But he was intrigued when the friend insisted the restaurant would be smaller and show more care toward food and drinks than the average chain-hotel dining room. Ultimately, he asked the friend to mention his name to the group. Nearly a year later, he received a call. “This opportunity was just too good to pass up,” he says. The couple moved back in November 2019.

A curved copper bar is lined with plush blue-green chairs with square backs and lit by a stunning glass chandelier.

The design of Lutie’s and Commodore was overseen by interior designer and creative director Ken Fulk, who among other things created the Lord of the Rings-themed wedding for Napster co-founder Sean Parker in 2013. “The hotel business is just so much different than the small chef-owned restaurant business,” Nicholson says. “Learning this side of it — it’s just a different game.” As part of their culinary roles at the hotel, Querejazu and Nicholson oversee multiple dining and beverage areas, from catering to the pool bar to room service. “You have this endless ability to be creative,” Nicholson says.

Nearly everything at Lutie’s is made on the premises, from pasta to ground beef for burger patties to bread, the latter of which Nicholson is particularly excited about. He describes an iteration of an English muffin where fermented Barton Springs Mill milk grits are folded in — “like a porridge bread” — that will be grilled and paired with a brown butter and cultured butter mixture.

A dish Querejazu feels exemplifies the restaurant is the grand aioli, a “colorful” spread with vegetables sourced from Steelbow Farms, lightly poached shrimp, and boiled eggs. “It’s the most refreshing spread,” she says. “It’s super in touch with Austin.”

Other dishes include pork from Yonder Way Farm alongside pickled cabbage and creamer peas, charcoal-grilled chicken served with hominy and leeks, and foie gras and salumi from the larder. A table is filled with white dishes scalloped edges. There’s a big steak in the middle next to a big glass of red wine and English muffins as well as salad. Nicholson and Querejazu are carefully sourcing their ingredients from local farms to showcase Texas’s bounty. The grand aioli features fresh vegetables including some cut into rosettes with poach shrimp and boiled eggs on a tower made from marble. A white plate with a single English muffin sits off to the side along with a crystal dish of dip and a clear stemless glass of white wine.

A white plate with a scalloped edge and a piled with grilled lettuce, sliced radishes, and sliced avocado. A spread of decadent desserts and cocktails in colors ranging from mint green to purple. There a circular red cake-like dessert sitting on a gold doily that’s topped with meringue, a glass dish filled with white macarons, and brown balls of what looks like some sort of chocolate and oat mixture.

Querejazu is known particularly for her pastry expertise, which is evident on Lutie’s dessert menu. “We proudly invented a dessert for me to incorporate some of my pastry background,” she says, nodding to the kouign amann ice cream, which features toasted bits of the buttery, crispy pastry. “It’s texturally delicious and super satisfying.” Other sweets include a strawberry soft serve with Texas olive oil, and blue cheese with smoked pecans and figs.

Working together isn’t new to the couple, and it gives them a shared language and a sense of relief. Says Nicholson, “It’s been very nice having Susana there, because I can take a few hours or a day away knowing that she’s going to be holding the standard that I hold when I’m there. It’s hard to find someone who sees things the way that you see them. She’s probably the only person that does.” Querejazu echoes that: “We’ve both learned a lot and have kind of a similar set of standards and eyes at this point.” A banquette with scalloped cushions and a deep green and white fern print. Black wooden chairs with curved backs and striped green and white upholstered seats are placed at wood tables and shown from above against the checkerboard patterned floors.

A vertical photo of tables and chairs in the main dining room surrounded by a canopy of greenery and bright natural light from a row of window.

Lutie’s is dressed up with a plethora of hanging plants.

Strands of variegated ivy hanging from a basket.

Ivy hangs from a basket inside the Lutie’s dining room. The design of Lutie’s and Commodore was overseen by San Francisco-based interior designer and creative director Ken Fulk, who has a large hospitality portfolio, including Marlowe, Leo’s Oyster Bar, and other Big Night Restaurant Group restaurants. He also designed a Lord of the Rings-inspired wedding for Napster co-founder Sean Parker in 2013. Architecture firm Clayton Korte renovated the space and created the restaurant.

The restaurant is meant to look and feel like a contemporary country club, which makes sense, given its history. The estate was built in 1928 as the country home of Commodore Edgar and Nannie Lewette Perry (whose nickname was Lutie). Shades of green are everywhere, and there’s a plethora of hanging plants, as well as half-stone walls, gold accents, and floral banquettes. Outside, a covered terrace overlooks the estate grounds, full of English sunken gardens and fountains.

Opening during a pandemic was jarring for the chefs, but they took it in stride. “It was not easy, for all the obvious reasons,” says Nicholson. But the nature of the small hotel worked in their favor: the smaller staff (at least when compared to other hotels), and especially the membership aspect, which “helped keep things going financially.”

“We were able to roll into this [with] a little bit more control than I think it would have been if we opened on some busy weekend in a normal year where the doors are just wide open,” Nicholson says. “I think we would have gotten our butts kicked.”

A white brunette woman in a blue apron smiles at the camera next to a white man with short brown hair and a matching blue apron.

Chefs Susana Querejazu and Bradley Nicholson are heading up the team at Lutie’s at Commodore Perry Estate. Working at a hotel was ultimately appealing to the duo because they were interested in taking hospitality “to the next level,” Querejazu says. Executing that kind of pristine service during the pandemic has been tricky, but “you just learn how to be flexible with everything,” she says. “It was a good learning experience.” Guests are still required to wear masks when they’re not seated for dining and drinking, and there are social distancing measures in place.

“We want to be a very memorable experience,” Nicholson says. “We want to be the kind of place where if someone’s traveling from out of town, they have to come eat at our restaurant because we’re one of the best.”

Garden style green metal chairs and marble top tables are set up under a striped awning on the patio at Lutie’s on a sunny day.

The cedar colored door to Lutie’s has the restaurant’s name written on it in simple black lettering under a striped black and white awning.

“We want to be a very memorable experience,” Nicholson says. Querejazu sees the restaurant as offering something for everyone. “We aim to hit all the marks,” she says, whether that’s for someone who wants some al fresco time on the patio with a cocktail or someone looking for a family dinner out. “I don’t want to put a name on it or anything like that, but yeah — have everyone come and enjoy themselves.”

Lutie’s is open for dinner from 5 to 10 p.m., Wednesday through Sunday.

Note: Currently, Lutie’s is only open for on-site service, and there are still safety concerns surrounding indoor dining in Austin. For updated information on coronavirus cases in your area, please visit the city of Austin website. Studies indicate that there is a lower exposure risk when outdoors, but the level of risk involved with patio dining is contingent on bars following strict social distancing and other safety guidelines. 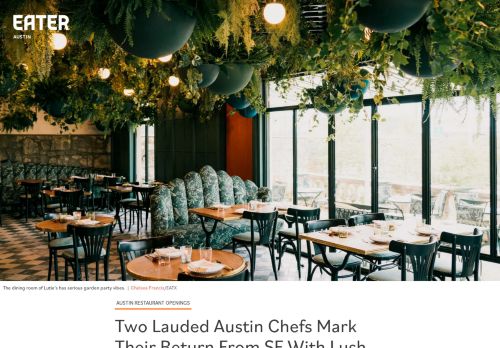 This article has been aggregated from austin.eater.com and they maybe/are the copyright owners of the same. If you are the Author/Copyright owner of this article and want us to remove the same then send an email to admin@blog.restaurant so that we can delete it immediately. We sincerely regret and apologies for any inconvenience caused to you due to the same. Though it is your decision but please take note that the link to your website and the article have been given above, within and on the bottom of the article.