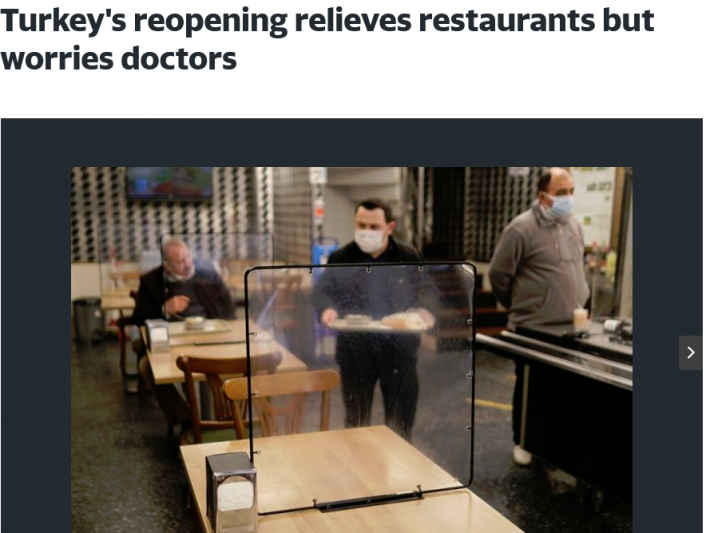 ISTANBUL (Reuters) - Turkish restaurants reopened and many children returned to school on Tuesday after the government announced steps to ease COVID-19 restrictions even as cases edged higher, raising concerns among the top medical association.

On Monday evening, President Tayyip Erdogan lifted weekend lockdowns in low- and medium-risk cities and limited lockdowns to Sundays in those deemed higher risk under what he called a "controlled normalisation."

Cafe and restaurant owners, limited to takeaway service for much of last year, have long urged a reopening of in-house dining after sector revenues dropped 65%. They also want relief from growing debt, and from social security and tax payments.

"We were serving 4,000-5,000 people a week. Now with takeaway services we are serving only 500 people," Istanbul-based Pideban restaurant owner Yusuf Kaptanoglu said before the easing measures were announced.

"I did not benefit from any support including loan support," he said.

Yet the moves come as new daily coronavirus cases rose to 11,837 on Tuesday, the highest since Jan. 7 and up from 9,891 a day earlier, according to official data. Cases were around 6,000 in late January.

"The number of mutant virus cases is increasingly rising. We do not see conditions to return to an old 'normal'," the Turkish Medical Association said on Twitter, calling for higher rates of testing and inoculation.

"Political and economic interests must not take precedence over human life and science," it added.

This article has been aggregated from news.yahoo.com and they maybe/are the copyright owners of the same. If you are the Author/Copyright owner of this article and want us to remove the same then send an email to admin@blog.restaurant so that we can delete it immediately. We sincerely regret and apologies for any inconvenience caused to you due to the same. Though it is your decision but please take note that the link to your website and the article have been given above, within and on the bottom of the article.