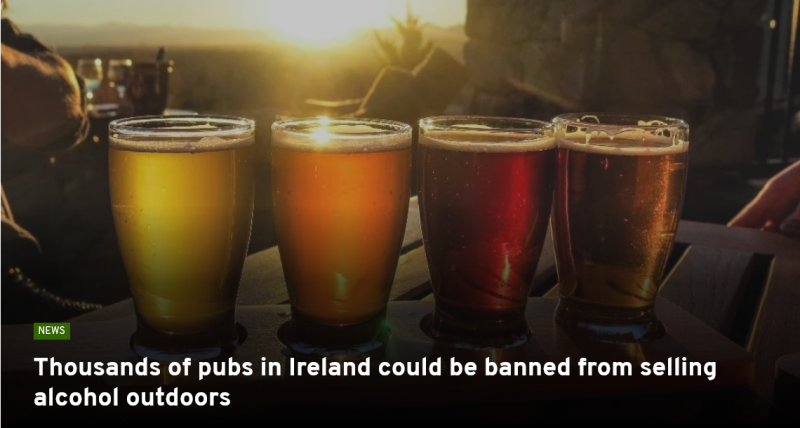 PUBS and restaurants across the country could be banned from selling alcohol outdoors, even once they're allowed to reopen.

While it isn't illegal to drink booze in outdoor areas, it's understood that local councils in Ireland are entitled to pass bye-laws to ban the consumption of alcohol in public places.

The reason they might do this is to prevent pubs and restaurants assembling makeshift outdoor areas so they can reopen at the earliest convenience, and serve more customers.

Premises need official permission to serve alcohol in a public spaces, and gardaí have been warning pub and restaurant owners to get it from their local council before it's too late.

Due to the rule, thousands of pubs across the country may be unable to open serve booze until lockdown eases to allow customers inside.

Bars and restaurants are due to reopen outdoors on June 7, but any facilities which fall foul of the rules will have to wait even longer before customers can help themselves to a pint.

A pub-owner in Drogheda told the Irish Mirror that he assumed he would be able to open as normal in just over a month's time, but was informed by gardaí that he needed to apply for a licence to put tables and chairs outside for customers to use.

"Gardaí informed us we couldn't serve alcohol out on the street and that without a change in the local bye laws it was against the law," he said.

"Apparently premises with a basement that comes out under the footpath are OK, because that means the footpath is covered by their existing alcohol licence.

"You couldn't make this stuff up, it's like something from the 18th century.

"All I know is I've effectively been banned from trading for a year and all the authorities are doing is putting more obstacles in our way."

This article has been aggregated from www.irishpost.com and they maybe/are the copyright owners of the same. If you are the Author/Copyright owner of this article and want us to remove the same then send an email to admin@blog.restaurant so that we can delete it immediately. We sincerely regret and apologies for any inconvenience caused to you due to the same. Though it is your decision but please take note that the link to your website and the article have been given above, within and on the bottom of the article.