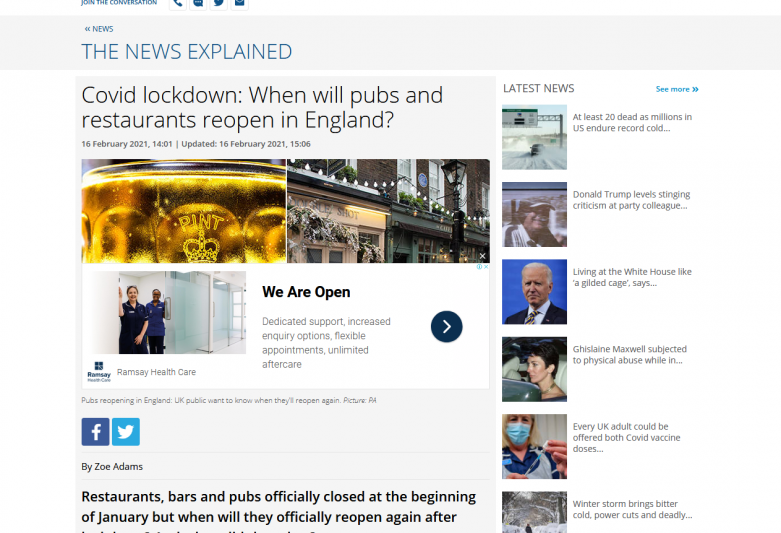 Hospitality has been one of the sectors worst impacted by the Covid pandemic, with a third of the UK’s jobs being in pubs, restaurants, cafes and bars.

The UK government has announced that at least 15 million people have now received their first dose of the coronavirus vaccine - so what does that mean for lockdown?

Staff and customers may have reason to be hopeful that pubs and restaurants could reopen before Summer, as Boris Johnson’s hopes to lift a significant number of restrictions after Easter could be achievable. 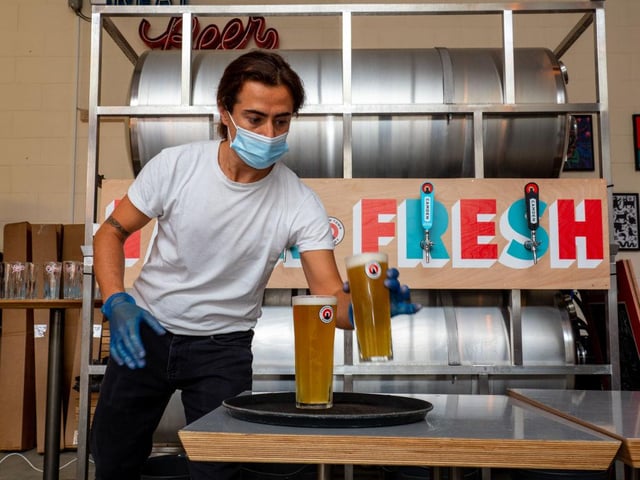 So, when could pubs and restaurants reopen? This is what we know so far.

Although the government are remaining tight-lipped about the finer details of reopening the country, there have been reports that hospitality could reopen as early as mid-April.

Since the Prime Minister announced a national lockdown on 4 January, there has been speculation that we could be waiting until July to enjoy a pint with our friends, but it could be sooner due to the success of the vaccination programme.

The earlier reopening of pubs and restaurants is also largely attributed to the fall of the national r-rate to below one - which was achieved on week commencing 8 February for the first time since last July.

Boris Johnson is set to announce England’s roadmap out of lockdown next week (22 February) when more definitive details are expected. Schools will be reopened in the first phase, expected to begin on 8 March.

At present, it is illegal to open any non-essential hospitality setting for service, other than takeaway and delivery.

Government guidance states: “with the exception of providing food and non-alcoholic drinks for takeaway (until 11pm), click-and-collect and drive-through. All food and drink (including alcohol) can continue to be provided by delivery.”

What will the rules be when pubs reopen?

The government could operate under a tiered system until all vulnerable priority groups have received their two doses of the Covid vaccine.

Should pubs reopen in April, it has been suggested that this would only be for outdoor spaces such as beer gardens and rooftop bars.

There have also been reports that ‘rule of six’ and two-meter distancing will remain in place until the end of summer, to counteract the influx of people and serve as an extra barrier to ensure another lockdown is avoided.

The speculation around pubs came as the Prime Minister asked the public to be at his press conference on 15 February to be “optimistic but also patient” with the current vaccination programme success, stating he wanted “this lockdown to be the last” but there was no “cast iron guarantee.”

By 30 April in England, all over-50s and clinically extremely vulnerable people should have received their first dose and the second dose should be administered 12 weeks later.

Therefore, the greatest degree of immunisation will be achieved by 30 July - it is possible that normality could resume in hospitality settings from this time.

In January, local authorities were granted powers by Westminster to keep hospitality in their areas closed until 17 July 2021 if there is a need to.

What impact has lockdown had on hospitality?

The hospitality industry makes up a third of the economy in the UK, and has been disproportionately impacted by the lockdowns since March 2020.

In the first three months of lockdown in 2020, the industry shrunk by 23 percent and 85 percent of the workforce was furloughed.

Research by Statistica suggests that pubs lost 44 percent of profit in March 2020 - in comparison to the same period in 2019. This rose significantly in August when lockdown eased, to a loss of only 10 percent.

However, with the closure of all pubs and the inability to sell takeaway alcoholic beverages it is expected that this will now be upwards of 90 percent.

The same could be suggested for restaurants, which suffered a 63 percent drop in sales in March 2020, when restrictions were much the same as they are currently.

The government was accused of “killing Christmas” by UK Hospitality's chief executive Kate Nicholls, when it closed the doors of thousands of hospitality settings, only days before 25 December.

What support has the UK government offered to bars and restaurants?

The sharp rise in profits seen in August and September can be attributed to the ‘Eat Out to Help Out’ scheme, introduced by chancellor Rishi Sunak.

Although welcomed at the time, these feelings of support soon dissipated due to increased lockdown measures introduced in late September and October.

However, there has been some longer term support, such as furlough, which has paid the wages of thousands of workers across the UK, to the tune of £46.4m (December 2020).

The hospitality sector will also not be required to pay business tax for the tax year of 2020-2021.

There is also a string of bounceback loans, future funds and a business interruption loan scheme.

Rishi Sunak also announced a further one-off payment for large businesses impacted by lockdown, which will support businesses until April.You can view the financial support offered by the government on its website.

Click Here To See More
News Source: www.yorkshirepost.co.uk
This is when pubs and restaurants could reopen as Boris Johnson set to announce lockdown roadmap 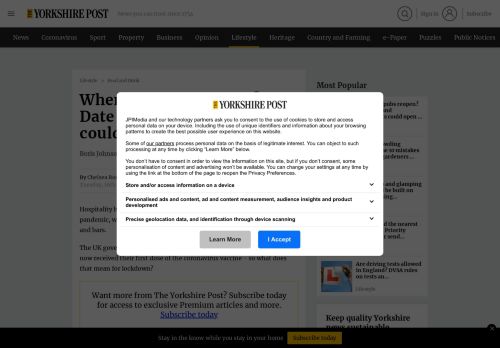 This article has been aggregated from www.yorkshirepost.co.uk and they maybe/are the copyright owners of the same. If you are the Author/Copyright owner of this article and want us to remove the same then send an email to admin@blog.restaurant so that we can delete it immediately. We sincerely regret and apologies for any inconvenience caused to you due to the same. Though it is your decision but please take note that the link to your website and the article have been given above, within and on the bottom of the article.