This 30-year-old helps run New York's most popular Ukrainian restaurant: 'There is a line standing out' from 10 a.m. to 10 p.m.

Vitalii Desiatnychenko, a manager at Ukrainian restaurant Veselka in New York City, helped navigate the restaurant and its staff through two tumultuous years of an... 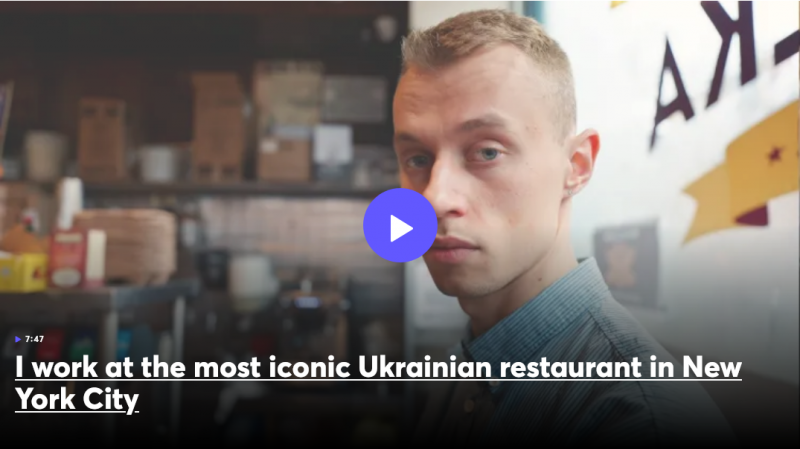 Vitalii Desiatnychenko, a manager at Ukrainian restaurant Veselka in New York City, helped navigate the restaurant and its staff through two tumultuous years of an ongoing pandemic. Inventory was a challenge. So was staffing.

Today, Desiatnychenko has a new challenge: keeping up with demand. Locals and tourists have flocked by the thousands to support Veselka and its efforts to donate proceeds to Ukrainian troops, throughout Russia's continued invasion of Ukraine.

"I was very surprised by the response of the New York community," Desiatnychenko, 30, tells CNBC Make It. "There is a line standing [outside] all day from 10 o'clock in the morning to 10 o'clock at night."

Desiatnychenko says Veselka used to serve between 600 and 700 patrons on an average weekday in Manhattan's East Village. Now, that number is up to 1,500, effectively doubling the restaurant's business volume. The community's support has been overwhelming – in both good and challenging ways.

"On an average day before [the war], usually the manager shift is somewhere close to eight hours, nine hours," Desiatnychenko says. "These days ... most of us are working 10- to 12-hour days."

Veselka is serves from its original location, which opened in 1954 in Manhattan's East Village neighborhood.

During those busy days, the native Ukrainian says he and his staff – around 50% of whom are also Ukrainian – often find themselves preoccupied, thinking of home and the safety of their loved ones.

"It's very hard to be Ukrainian and not living in Ukraine [right now]," Desiatnychenko says. "You have to be physically present here and still go to the job and do your job, but your mind is elsewhere."

Here's what it's like for Desiatnychenko to help run one of the most popular restaurants in New York, during a time of high demand and high stress, while trying to support Ukrainian troops from thousands of miles away:

Since 1954, Veselka has been a New York staple. The restaurant was originally opened by a Ukrainian immigrant as a small coffee shop on an East Village street corner.

Over time, its menu expanded. So did the physical digs: The original location, still Veselka's home, is much larger than it used to be. Starting in 1990, the restaurant became a 24/7 joint, serving breakfast, brunch, dinner and late-night snacks like pierogis, goulash and latkes.

In 2019, the restaurant expanded to a second location, opening a storefront in a food market called The Market Line on Manhattan's Lower East Side.

"The business 10 years ago was slightly different, but was pretty much the same crowd," Desiatnychenko, who has worked in various roles at the restaurant over the past decade, says. "People would be coming in from bars, restaurants, clubs [at] four o'clock in the morning, five o'clock in the morning… to grab their last night bite."

Vitalii Desiatnychenko, Veselka's front of house manager, has worked in just about every job in the restaurant since joining the staff in fall 2012.

Desiatnychenko knows firsthand why so many people find Veselka special. He emigrated from his hometown of Kyiv, Ukraine's capitol, to New York shortly after completing a bachelor's degree in economics from Kyiv National Economic University in 2012. Two weeks after moving to the city, he was hired at Veselka — on the spot — as a busser and part-time delivery person.

"Veselka has become my second home," Desiatnychenko says. "Unfortunately, I don't have a family in the U.S., so people that work at Veslkea have become my American family. I just treat the business as my own business and always try to do what works the best for business because I just care about it."

But on any given day, he might take on any other additional responsibility within the restaurant as needed, he says: During height of the Covid pandemic, when Veselka lost a third of its staff, he even rotated into the cooking line, making sandwiches and eggs on the grill.

When Russia invaded Ukraine on Feb. 24, Desiatnychenko says he couldn't sleep or eat. He constantly checked his phone for updates on his family still in Ukraine, including his mom, dad and 83-year-old grandmother.

Now, he calls them daily before they go to sleep, accounting for the seven-hour time difference — and again as they wake up, before he goes to sleep. "The only question I have every time, it's the same question: 'Are you guys OK?'" Desiatnychenko says. "I don't care about anything else. I just want to hear that they're OK."

Almost immediately after the invasion, Veselka became a community hub for Ukrainians in New York. The restaurant's owners quickly decided to donate proceeds from sales of borscht – a traditional Ukranian soup made from vegetables and fermented beet juice – to the Ukrainian government, intended for military needs.

The restaurant also converted its warehouse into a donation center. So far, people have given flashlights, batteries, diapers and medical supplies for Ukrainian citizens. "People have been bringing things constantly, every day, nonstop," Desiatnychenko says. "I was really surprised about how people picked up on this idea."

Desiatnychenko’s workdays are consistently longer now than they were a couple months ago. The new donation center has added to his list of responsibilities, too — and the stress of his family’s safety weighs on him constantly.

But despite the mayhem, Desiatnychenko says he’s comforted by the community around him.

“Veselka has become a place where people can just come in and gather together, where people are looking for support from other people, and they can share their thoughts,” he says. “Other people are trying to show their support in Ukraine [and] a lot of people just want to show that they actually care.” 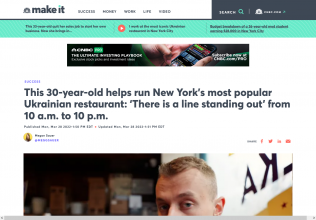 This article has been aggregated from www.cnbc.com and they maybe/are the copyright owners of the same. If you are the Author/Copyright owner of this article and want us to remove the same then send an email to admin@blog.restaurant so that we can delete it immediately. We sincerely regret and apologies for any inconvenience caused to you due to the same. Though it is your decision but please take note that the link to your website and the article have been given above, within and on the bottom of the article.