The London Restaurant Openings to Get Excited About in 2021

The London Restaurant Openings to Get Excited About in 2021 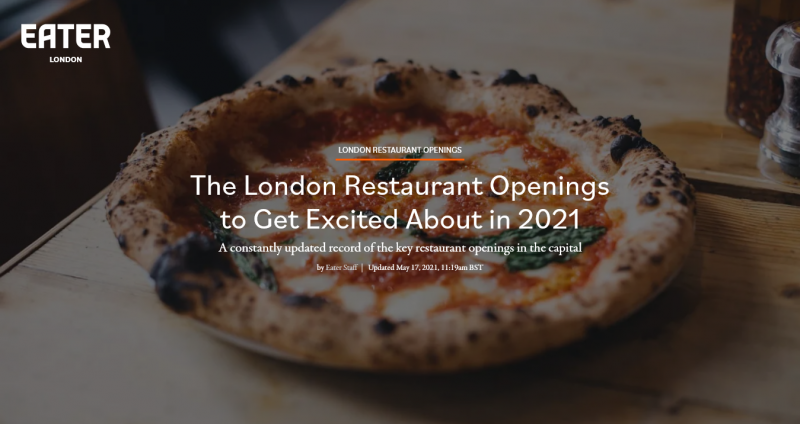 London — and its hospitality industry — is some way from a return to its pre-pandemic order. But one sign of a semblance of normality having resumed is the steady flow of new opening announcements, many of which were on course to arrive in 2020 but whose timelines were interrupted by the novel coronavirus crisis. With the caveat that these dates are subject to change, here’s the definitive list of notable upcoming openings in 2021, in order of anticipated launch. This list will be updated constantly.

London’s restaurants, pubs, cafes, and bars reopen for indoor service from 17 May, with the rule of six in place. Customers can check with individual venues to determine their availability and Covid-secure measures before deciding to visit.

What to expect: The quality falafel, lamb shoulder, and other Syrian dishes that have made Alarnab’s frequent pop-ups a hit.

What to expect: A yakitori-influenced restaurant, framed as “comb to tail” to avoid direct comparisons to yakitori-yas.

What to expect: “Playful” French dishes with Asian inflections, running the continent’s gamut from satay steak to miso scallops. Prime Mayfair fodder, this.

What to expect: Two restaurants, one, Nomad Restaurant, more smart, and two, Side Hustle, a pub-like environment focussed on Mexican sharing food.
Projected opening: 25 May 2021

What to expect: A satellite bakery from the Newington Green hit.

What to expect: The next iteration of Rita’s, the much-loved, irreverent, and peripatetic restaurant and wine bar from Flynn and Price.

What to expect: A relocation for the flagship pizzeria from Santa Maria.

What to expect: Vegan pizza and other dishes from the founders of Santa Maria, taking over its original restaurant.

What to expect: A pan-Mediterranean restaurant and bar with a courtyard for outdoor dining.

What to expect: Pizza that’s captivated Manchester, Leeds and Liverpool with fierce devotion to Neapolitan traditions.

What to expect: A satellite bakery from the Newington Green hit.

Key people: Harts Group, the team behind Barrafina and the El Pastor mini-chain

What to expect: A large taqueria, mezcal bar, and club, which nods not just to Mexico City but the 1990s, and a nostalgic brand of partying too.

What to expect: A “church” vibe, but the kind of church that has sixty centimetre ice cream cakes.

What to expect: A fine-dining restaurant with its top button undone, based on grill cookery and small plates.

What to expect: A light, bright deli-restaurant serving colourful dishes speckled with the flavours of pomegranate, za’atar, and more.

What to expect: A loosely Tuscan restaurant from the small plates pioneer, intending to function as a canteen by day and a dolled up restaurant by night.

What to expect: A new iteration for London’s slickest restaurant group, with a license for music and cinema promising ... Music and cinema.

Key people: One of the world’s largest udon noodle and tempura specialists.
What to expect: Sanuki udon boiled off to order, in myriad variations.

What to expect: “A wine drinker’s clubhouse,” with a focus on natural and low-intervention styles with a 40-cover modern French-leaning restaurant.

What to expect: An “expansive garden terrace,” with a menu centred around delicate grill cookery.

Key people: The team behind the NYC brunch fave.

What to expect: Some very famous praline pancakes and more breezy all-day fare.

Key people: Daisuke Hayashi, of two decades’ training at one of the world’s foremost kaiseki restaurants, Kikunoi Honten in Kyoto.

What to expect: Kaiseki mastery from one of its most expert practitioners.

What to expect: An Italian food “marketplace” comprising three restaurants, produce counters, and a bakery over 42,000 square feet.

What to expect: A huge seafood restaurant in the heart of Soho, in the affordable luxury guise that the duo do so well.

What to expect: Next door to Atherton’s flagship site, Pollen Street Social, this 16-seater restaurant will not open with ambitions for Michelin stars, according to him.