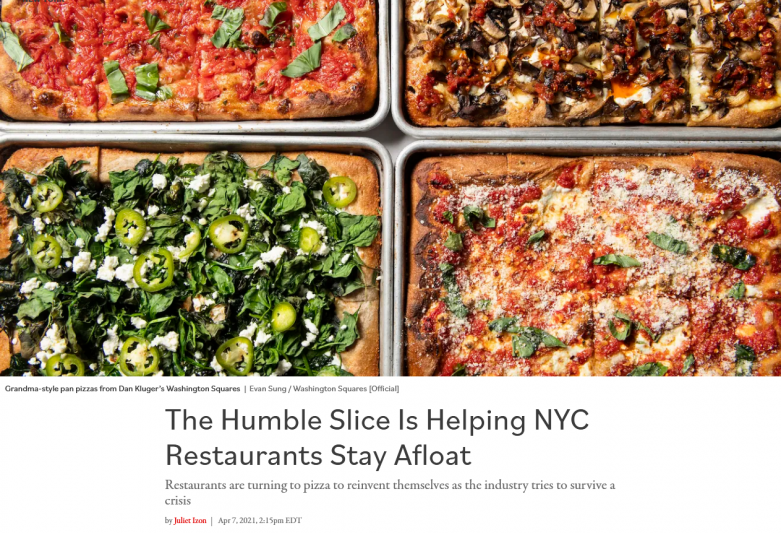 It’s doubtful that anyone in the restaurant industry will look back fondly on the last 12 months. But one trend that has gained considerable steam in the past year is one many New Yorkers hope will endure long after the pandemic: a pivot to pizza. And while this isn’t just a New York phenomenon (as the New York Times noted), the city is primed for reimagining its iconic dish.

It’s easy to understand the nascent stage of this fad: Has there ever been a greater need for comfort food than now? Moreover, for restaurants grappling with a way to provide items ideal for carryout or delivery, few dishes travel quite as well as pizza. And, in its most simple form of crust, tomato sauce, and cheese, it can be made relatively cheaply while still being deeply satisfying. “Pizza is a ‘come as you are’ thing,” says chef Justin Smillie of the newly opened Smillie Pizza by il Buco Alimentari. “It makes people feel comfortable and it allows for all styles and palates.”

Il Buco Alimentari has served pizza since it opened, but Smillie had been toying with the idea for a standalone pizza concept for six or seven years. “The pandemic gave me the push to launch now, with people at home and craving comfort food, but looking for an exciting, creative twist,” Smillie says. His menu includes seven different pies, ranging from a classic margherita to a kale, anchovy, and stracciatella, all made on an ancient-grain crust. “It may look like a Neapolitan, but it has its roots in California pizza: The dough has an olive oil flavor and a slight tang,” he says.

In fact, a hallmark of many of these new pizzas is a reimagining of its platonic ideal. Sourdough seems to be especially popular. For Peasant’s reopening menu, Marc Forgione created a 72-hour fermented sourdough crust made with a mix of rice, soy, and wheat flours. Toppings include the classics, but also more unique combinations like a spinach and artichoke dip, or mascarpone and Brussels sprouts. Tribeca institution Bubby’s is using its sourdough starter, which dates back to 1890, to form the base of a tangy, non-yeasted crust. It was actually in an effort to keep the restaurant’s starter from dying that owner Ron Silver began toying with a pizza recipe. “It came straight out of the pandemic,” Silver says of his pies. “If it were not for the months alone at home, I never would have bought a bread oven to start experimenting with sourdough products in order to keep our starter alive.” The restaurant’s thin-crust pies can now be topped with anything from smoked Buffalo chicken to hot sopressata and honey.

For those who like a little more crust, however, puffier Sicilian and grandma-style squares have also seen a resurgence. Beloved bagel chain Black Seed launched Black Seed Pizza this February, as a way to utilize their bagel ovens when not in use. The pizza concept is a collaboration between Black Seed’s owners and chef Bobby Hellen, who used to sling pies at the now-closed but well-regarded GG’s. Black Seed Pizza’s squares are notable for their crispy bottoms and seasoned dough. As Hellen notes, “We don’t want a boring bite; the whole pizza has something going on.”

An overhead photograph of a round Sicilian-style pan pizza, topped with melty cheese and pepperoni Over in Greenwich Village, chef Dan Kluger was already well-known for his whole-wheat, grandma-style pan pizzas at Loring Place, but opened pizza spot Washington Squares this December. The star here may be his mushroom pie, which is topped with ricotta, mozzarella, fontina, a mix of mushrooms, and drizzled with an addictive chile crisp. “The pandemic gave us the means and need to get it up and running,” Kluger says. “There is a constant pressure today to be creative and to come up with solutions to generate more revenue. The timing of opening something like Washington Squares certainly happened faster than it would have if the pandemic hadn’t happened.”

As for opening during the biggest crisis the restaurant industry has seen in, well, maybe ever? It’s not for the fainthearted. “I can tell you that opening a restaurant in the middle of the pandemic is its own special kind of stress,” says Pino Luongo of Coco Pazzo and its new, pizza-focused offshoot, Coco Pazzeria. But the gamble was worth it for Luongo, who had long dreamed of a restaurant serving a light, thin-crust pie. Moreover, in his estimation, pizza’s adaptability made it ideal for current protean restaurant requirements, be it outdoors-only dining or delivery.

The early months of lockdown certainly gave many chefs more time to play with ingredients or new concepts, but nearly all who have added pizza to their menus did so primarily as a way to increase sales in a very uncertain climate. Momofuku’s Ko, with its high-end tasting menu, may not have seemed a likely candidate to sling pies, but even they came around to its utility. “We were spending a lot of time trying to figure out what we were going to serve as a delivery item, or what kind of food we could do with an extremely small staff,” says chef Sean Gray. “I think, jokingly, we all kind of wanted to do pizza.” And once Ko decided to serve all delivery items in pizza boxes, it just seemed preordained. (Although, heads-up, they’re no longer serving takeout or delivery from the restaurant). Five pies are currently available, and, in true Ko fashion, they include a $65 sea urchin, ricotta, and shio kombu variety, as well as a more accessible spicy tomato and capicola for $28. While many of these pies have already attracted a rabid following, the most salient question is if they have enough popularity to keep these restaurants in the black. The answer, unfortunately, is not yet clear. Since beginning to offer pizza this May, Bubby’s now sells about 30 of its thin-crust pies a night, which Silver considers “solid.” And with loosening restrictions on indoor dining capacities, Luongo of Coco Pazzeria is bullish on the future. “We are looking forward to things taking a turn for the better as we welcome more diners,” he says. “Our cornerstone is the quality of our food, but the experience that we have conceptualized for the Pazzeria is a key part of our concept.” Kluger, of Washington Squares, however, was hoping for stronger sales than what he’s seen so far. “I’m not sure I can say if serving pizza has helped us navigate these stressful times,” he says. “But, it has kept some employees [on the payroll] and inspired us to do more. Hopefully, slow and steady wins the race.” Disclosure: David Chang is producing shows for Hulu in partnership with Vox Media Studios, part of Eater’s parent company, Vox Media. No Eater staff member is involved in the production of those shows, and this does not impact coverage on Eater. 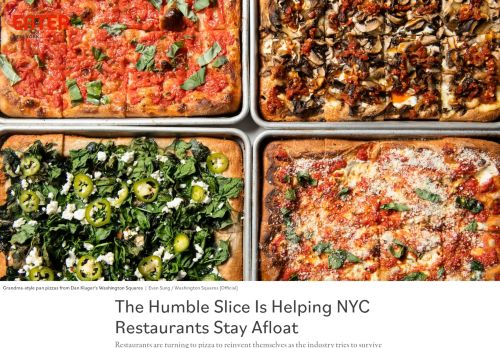