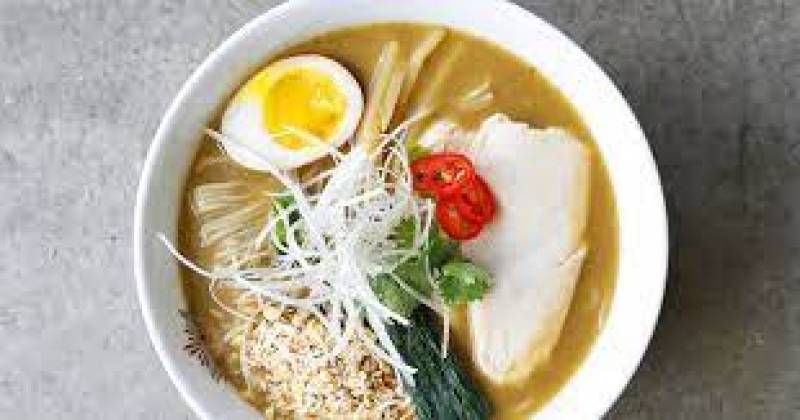 Before the viral success of Keizo Shimamoto’s Ramen Burger, before his Ramen Shack pop-up rolled its way into New York’s Smorgasburg, and certainly before he ate 55 bowls of ramen in 28 days, he was a 6-year-old kid who encountered a bowl of Chinese-inspired egg noodles in a soy-sauce broth.

Shimamoto remembers being on one of his annual trips to Japan to visit family and refusing to eat. His frustrated mother took him to a ramen-ya, and the flavorful bowl of soup and noodles triggered a lifelong fascination and eventual transformation into a blogger, a chef and one of the world’s preeminent ramen authorities.

He can’t recall the exact place where he had his first ramen encounter — there are countless regional varieties across Japan, and even more ramen shops — but to this day, that Tokyo-style shoyu with chuka soba noodles is still Shimamoto’s favorite. This summer, when he opens a permanent Ramen Shack restaurant in San Juan Capistrano, you’ll be able to taste his own version.

“My ramen is like a ramen geek made it,” he said. “I pay attention to all the styles and … I’m continually studying. Even if I eat a bad bowl of ramen, that’s good information for me.”

Those annual family trips from Southern California to Japan introduced Shimamoto, 43, to ramen culture, but a 2008 visit to Yokohama’s Shin-Yokohama Ramen Museum — where a map revealed the full extent of ramen’s geography and possibility — opened his eyes to how much there was to learn. In the spring of 2009, after losing his job in finance and computer programming, he returned and ended up consuming 55 bowls of ramen across Japan’s prefectures in one month. Later in the year, he moved to Tokyo where he worked at ramen houses Ivan Ramen and Bassanova and became a perpetual student devoted to his craft. (Shimamoto estimates he’s made 70 to 80 varieties of ramen in the last decade or so, thanks to both restaurants.)

A man stands in the doorway between his home and garage. Chef Keizo Shimamoto in the garage of his Irvine home.

He returned to the U.S. in 2013 and introduced his Ramen Burger at the New York food festival Smorgasburg (and that led to the launch of the Ramen Shack pop-up). The burger consisted of a shoyu-glazed beef patty placed between two secret-recipe ramen “buns,” and it instantly went viral around the same time as the Cronut, making 2013 a banner year for marketable mash-up foods and one that helped inspire an onslaught of photo-minded food trends. (The Ramen Burger came to Los Angeles in 2014 and was served from a small takeout window in Koreatown until it shuttered in 2016.)

Rising costs forced him to close his New York operation in 2019, and he returned to Southern California with his wife and three children.

Of course, he couldn’t stay away from ramen.

Shimamoto plans to spotlight a handful of varieties at the new place, which he hopes will open in July. “I used to go to San Juan Capistrano as a kid, for field trips and stuff. [But ] all I knew was the Mission.” Later trips convinced him that “this could be the next great food city.”

San Juan Capistrano, primarily known for its 1776-founded mission, is now a flourishing food destination thanks in part to a downtown main drag where some of the most exciting new restaurants in Orange County can be found only steps away from each other. Ramen Shack will be right in the middle of it all, at 31751 Camino Capistrano, Suite 4.

“Just the look of the town has changed so much,” said George Barker, the owner of Mayfield — a restaurant, market and coffee shop known for its Middle Eastern, Mediterranean, North African and California flavors — that is just south of Shimamoto’s restaurant. “It was quite a sleepy, quiet town when I first started coming here three or four years ago. Now it’s packed. It’s busy. It’s vibrant. … It’s really cool. There’s so much history and culture here as well.”

There’s also the smell of smoked meats in the air and its source is another of San Juan Capistrano’s new culinary draws, Heritage Barbecue.

The Texas-style barbecue operation opened last summer across the street from the mission, serving up heaping trays of smoked meats and sides such as choriqueso mac and cheese. On weekends, lines can wrap around the patio and into the back parking lot; the restaurant is a draw for locals as well as barbecue aficionados from Southern California and the rest of the country.

“I think some of the local people here, in the beginning, were a little standoffish, just because I think anything new … they’re a little bit worried about. They just want to make sure that their community is not going to be exploited,” Castillo said. “That being said, there’s room for improvement and a shift. People are really educated when it comes to food and drink these days. Palates have changed and there’s a younger generation, and they demand the best. Food is always evolving.”

A bowl of negi shoyu ramen And more food is on the way. Pandemic-borne bakery outfit FKN Bread (pronounced “F.K.N.”) launched in the nearby home of husband-and-wife team Dave and Bree VandenBerg when Dave, a professional chef, temporarily lost his job. The hobby and side project expanded to multiple farmers market appearances each week, and this summer the VandenBergs will open a bricks-and-mortar bakery on Camino Capistrano to sell their signature loaves of sourdough bread and cafe fare.

“People that are local know, but other people outside don’t know that all these businesses are truly family-run and -owned businesses,” said Bree. “[At] every single local business in downtown San Juan, the owner is busting their booty, running it for their family. That makes you want to spend your money, show your friends, tell your neighbor.”

In addition, a new nearby development project called River Street Marketplace from Frontier Real Estate Investments — which owns a number of restaurant properties in San Juan Capistrano — is set to reimagine the city’s Los Rios District with restaurants, shopping and a market that could feature a fishmonger, a butcher and other food vendors.

Chef Keizo Shimamoto has been testing noodle recipes in the garage of his Irvine home ahead of his restaurant, the Ramen Shack, opening this summer. It all begins with water and kansui, an alkaline salt that gives the soup’s noodles a chewy springiness. Then the mix is added to flour — in Shimamoto’s case, usually a blend of three or four varieties for any given recipe. As his Taisei noodle machine whirs to life, it mixes the crumb-like dough. The dough is then flattened into sheets that are rolled together, again and again, mimicking the kneading process to form the noodles’ gluten.

Years of experience have allowed Shimamoto to develop a graceful and rhythmic choreography during the many phases of the process: A snowfall of cornstarch falls without sticking as the dough runs through the cutter, and the chef folds the trimmed noodles into loose knots right off the conveyor belt.

For now, Shimamoto is planning a relatively simple menu — three varieties of noodles and a range of broths — at the San Juan Capistrano site, but friends and family tease him because they doubt he’ll be able to limit himself for long. (And, yes, it’s likely he will offer the Ramen Burger at some point.)

“I get bored because I’ve tasted so many different styles,” Shimamoto said from his garage. “I want to play around, and I have so much in my imagination I want to get out. That’s kind of why I go crazy sometimes: I just can’t make one bowl every single day. I’m studying.” 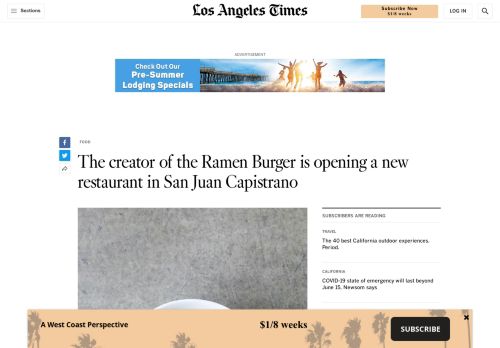 This article has been aggregated from www.latimes.com and they maybe/are the copyright owners of the same. If you are the Author/Copyright owner of this article and want us to remove the same then send an email to admin@blog.restaurant so that we can delete it immediately. We sincerely regret and apologies for any inconvenience caused to you due to the same. Though it is your decision but please take note that the link to your website and the article have been given above, within and on the bottom of the article.