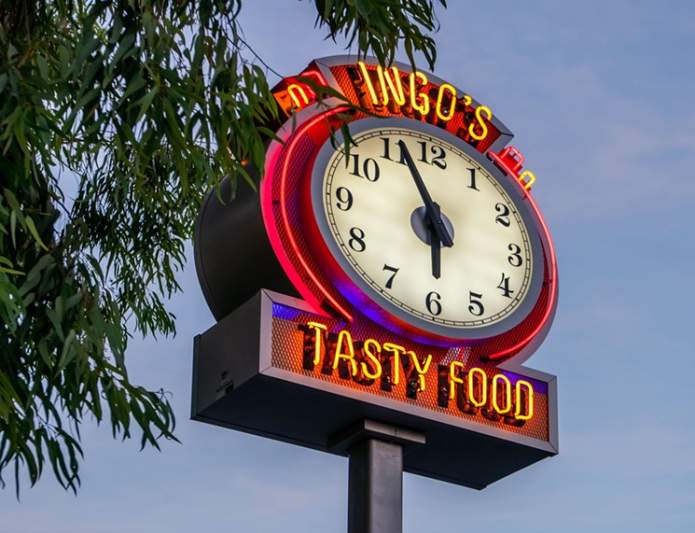 Support the independent voice of Phoenix and help keep the future of New Times free.

It’s Friday. We have five big bites of food and drink news to catch you up on the week’s events. Here comes your recap

LGO Hospitality is now opening a third location of Ingo’s Tasty Food in addition to the second one coming to downtown Phoenix (101 East Washington Street, #110) this summer. The third spot will be in north Scottsdale at Scottsdale Road and Mayo Boulevard near the new Buck & Rider (18545 North Allied Way in the Shops at Chauncey Ranch). Both new Ingo's will have the same burgers, salads, and cocktails as the original Arcadia location. But the Scottsdale one is slated for a mid-2022 opening.

99 Ranch Market Has Opened in Chandler

Get ready for an 18,000 square foot rooftop restaurant.

The Global Ambassador Hotel Will Have a Huge Rooftop Restaurant

Sam Fox, the restaurateur behind Fox Restaurant Concepts (Culinary Dropout, Wildflower, Zinburger, etc.), is getting into the hotel business. The Global Ambassador will be a 141-room luxury hotel at 4455 East Camelback Road. But with lodging comes dining, and Global will offer five original dining venues, including an 18,000 square foot rooftop restaurant yielding killer views of Camelback Mountain. This will apparently be the largest rooftop restaurant in the state upon opening in fall 2023.

Tempe is awash in taco joints. But that doesn’t mean its residents aren’t stoked to hear about Cocina Chiwas opening in the east Valley city sometime in 2022. The owners of Chiwas Tacos, Nadia Holguin and Armando Hernandez, are opening the new concept, which focuses on entrees from Sonora, Chihuahua, and Sinaloa. Cocina Chiwas will be one of the dining options at Culdesac Tempe — a 1,000 resident, car-free neighborhood in the works between McClintock and Price drives and Apache Boulevard.

Keep Phoenix New Times Free... Since we started Phoenix New Times, it has been defined as the free, independent voice of Phoenix, and we would like to keep it that way. Offering our readers free access to incisive coverage of local news, food and culture. Producing stories on everything from political scandals to the hottest new bands, with gutsy reporting, stylish writing, and staffers who've won everything from the Society of Professional Journalists' Sigma Delta Chi feature-writing award to the Casey Medal for Meritorious Journalism. But with local journalism's existence under siege and advertising revenue setbacks having a larger impact, it is important now more than ever for us to rally support behind funding our local journalism. You can help by participating in our "I Support" membership program, allowing us to keep covering Phoenix with no paywalls.

Lauren Cusimano is Phoenix New Times' food and drink editor. She is a journalist and food waste writer based in Tempe. Joys include eating wings, riding bikes, knowing everyone at the bar, talking too much about The Simpsons, and falling asleep while reading.

This article has been aggregated from www.phoenixnewtimes.com and they maybe/are the copyright owners of the same. If you are the Author/Copyright owner of this article and want us to remove the same then send an email to admin@blog.restaurant so that we can delete it immediately. We sincerely regret and apologies for any inconvenience caused to you due to the same. Though it is your decision but please take note that the link to your website and the article have been given above, within and on the bottom of the article.