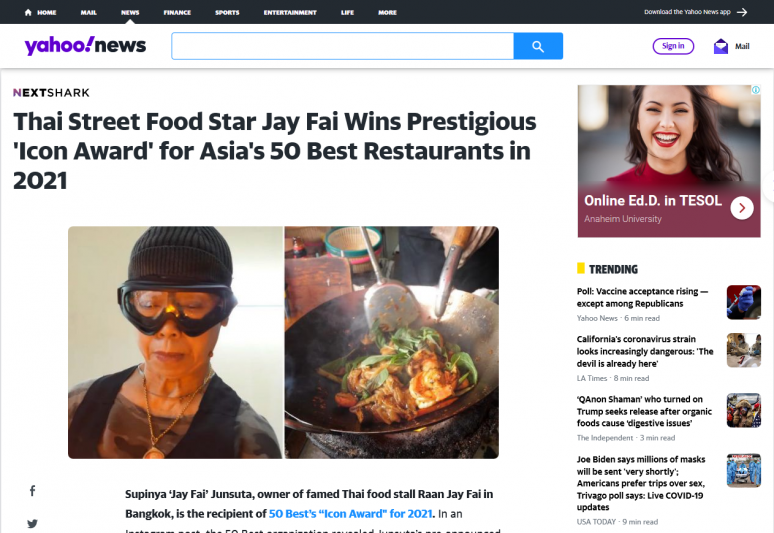 Supinya ‘Jay Fai’ Junsuta, owner of famed Thai food stall Raan Jay Fai in Bangkok, is the recipient of 50 Best’s “Icon Award" for 2021. In an Instagram post, the 50 Best organization revealed Junsuta’s pre-announced award ahead of its big unveiling of Asia’s 50 Best Restaurants 2021 on March 25.

"I am grateful to be recognized for my hard work and craftsmanship. This is truly the reward of a lifetime for an ordinary chef like me,” Junsuta was quoted as saying. “But most importantly, I hope everyone can learn from my story that dedication, hard work and patience can help you achieve your goals.”The former seamstress was forced to transition into cooking after a fire destroyed her home and sewing supplies. She taught herself to cook Japanese omelets and eventually crafted her signature "khai jiao poo" (crab omelet) using similar techniques.Back in December 2017, Junsuta was among the recipients of a star rating from the very first selection of the Michelin Guide Bangkok, NextShark previously reported. The Thai restaurateur would later lament that she’d rather give the star back to the organization due to the influx of visitors after the recognition.“Many people come just to see and take pictures and not necessarily to eat,” she said then.Voted by industry experts, the 75-year-old street food star is once again being recognized, this time for her career spanning four decades and her rise to be one of the most respected wok chefs in the industry.

"The Asia’s 50 Best Restaurants 2021 aims to acknowledge local champions, celebrate the sector’s resilience and honor the leaders who have demonstrated innovation during the crisis," its website explained. Other upcoming awards to be revealed ahead of the "Best Restaurants" include "Asia’s Best Female Chef Award," which will be announced on Feb. 25, the "One To Watch Award" on March 4, and the "Inedit Damm Chefs’ Choice Award" on March 11. Image (left) via Michelin Guide Asia, (right) Mark Weins 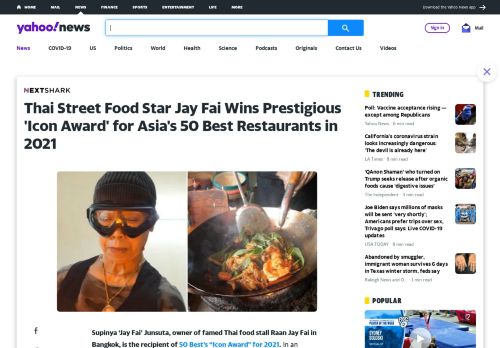 This article has been aggregated from news.yahoo.com and they maybe/are the copyright owners of the same. If you are the Author/Copyright owner of this article and want us to remove the same then send an email to admin@blog.restaurant so that we can delete it immediately. We sincerely regret and apologies for any inconvenience caused to you due to the same. Though it is your decision but please take note that the link to your website and the article have been given above, within and on the bottom of the article.