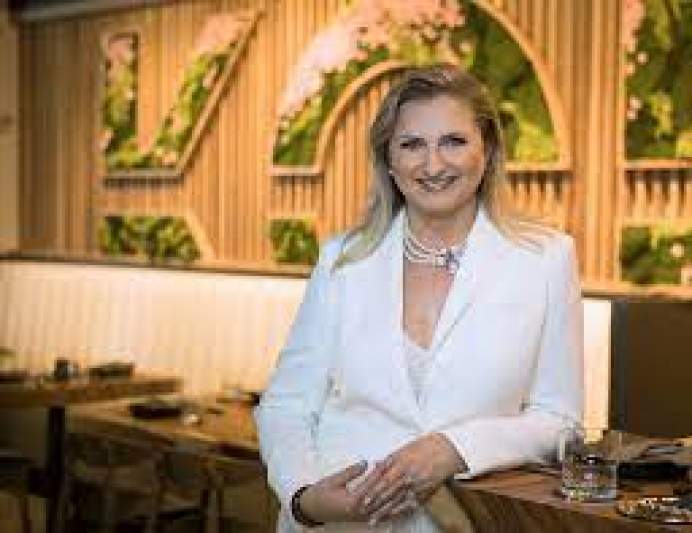 Company: Hi Hospitality Group has three restaurants, two in Sarasota and one in Lakewood Ranch, and plans to open Central Park Food Hall in St. Petersburg next year. The restaurants, the company says, have served over 500,000 diners. (Levey declines to disclose revenue figures.)

In 2018 Levey, 42, was working as culinary wellness educator, speaker and author when she first joined the ownership group of Speaks Clam Bar in Lakewood Ranch. A few months later, in August, Speaks Clam Bar in St. Armands Circle opened.

At the beginning, she says, she focused a lot of her efforts and attention on “creating a happy company culture” with a focus on customer service.

Levey, who was born in Russia, is a graduate of the Art Institute of New York and has spoken at TedX conferences, sometimes speaks in a soaring type of rhetoric. In her company bio on a press release, her background is described as “filling bellies, feeding souls and formulating the future.”

That tone is not accidental. For Levey, the experience is as important as anything else.

And her approach has worked.

After joining Speaks Clam Bar in Lakewood Ranch, she took over marketing and public relations, making sure the restaurant was on TV, online and in print as well as planning specials events. “Communicating with customers, understanding their needs, specifics of their dining experiences was the key to growth,” she says, adding that by 2019 the Speaks Clam Bar locations had grown revenue more than 30%.

Levey first owned Speaks Clam Bar with her brother-in-law. In 2020, he left the business and Levey renamed the company Hi Hospitality. Her husband Mark Levey then became a partner,

The growth hasn't come without some hiccups.

When the Speaks Clam Bar in St. Armands first opened, for example, she says red tide kept tourists away. Then the pandemic hit, affecting the entire hospitality industry.

But Levey says that in the “first quarter of 2021 both Speaks have seen a comeback, thanks to the loyal following of our beloved guests.”

To build on what it has already accomplished, in February Hi Hospitality Group opened Kojo in downtown Sarasota. At the time it opened, the company said the Pan-Asian concept was inspired by the time Levey spent living and traveling the area as well as her and her husband's appreciation of the region’s dishes and culture.

Best advice: Levey says the most important entrepreneurial lesson she’s learned over the years is not to take anything personally.

She describes herself as an empath and says she’s an emotional person. Over the years she’s been told that’s a quality not conducive to the business world — and that it could make operating in an industry as competitive as restaurants difficult. She’s also been told that it’s a weakness.

“I feel that it’s my biggest strength,” she says. “I feel that it just helps me to connect with people in situations on a much deeper level.”

She says embracing the emotional and not taking things personally allows her to look at situations from all different perspectives. She’s taken that approach in creating training manuals that teach employees to dig deep into issues in order to find solutions to problems. “We use (that concept) as a training tool,” she says.

Best decision: “He’s my best friend. It’s incredible to go through life as friends, and now he’s my business partner in the restaurants as well,” Levey says, speaking of marrying Mark.

The couple have been married for 20 years, and she says marrying him was the best decision she’s made.

Biggest mistake: “Being very trusting,” she says. “I think that would be the one.”

Levey says she’s “had some situations” which have put her in challenging positions. (She declines to elaborate on those situations.)

Up-at-night worry: Levey says despite the restaurants doing well, it’s knowing people count on her is what leads to sleepless nights.

And it’s not just employees, Levey feels that she needs to look out for vendors, diners and “anybody we work with.”

This article has been aggregated from businessobserverfl.com and they maybe/are the copyright owners of the same. If you are the Author/Copyright owner of this article and want us to remove the same then send an email to admin@blog.restaurant so that we can delete it immediately. We sincerely regret and apologies for any inconvenience caused to you due to the same. Though it is your decision but please take note that the link to your website and the article have been given above, within and on the bottom of the article.