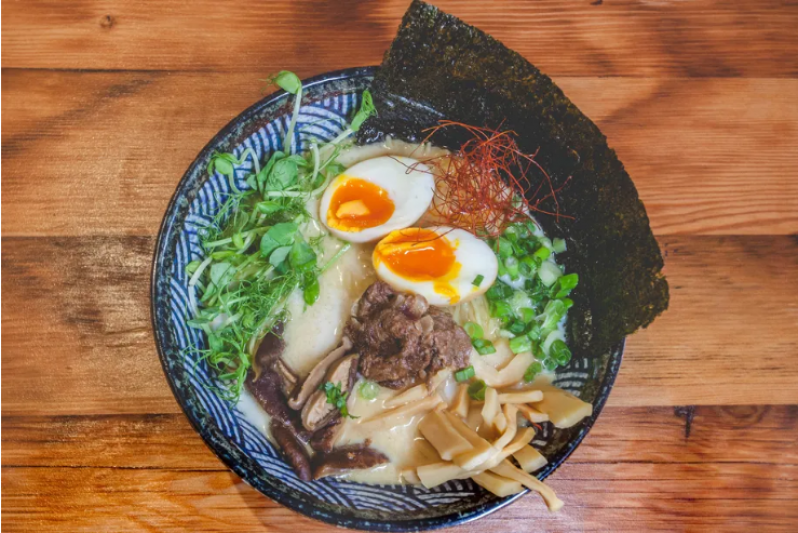 When Omar Shah first put ramen on his menu, it was a disaster. A single bowl would stop the kitchen at Bintang — the Kentish Town Filipino restaurant that his father opened in 1987 — in its tracks. “Every time we made a bowl, all the chefs would just stop what they were doing, getting out the toppings and the broth, it was chaos, like: ‘Oh shit, there’s a ramen order.’ They’d carefully put it on the pass, and the customers would love it so much ... But I had to take it off. It had four chefs surrounding it. One bowl. I knew that if I ever did this dish again, it’ll have to be in a separate restaurant, dedicated to ramen.”

That restaurant duly arrived in 2018, when Ramo Ramen — the outstanding Filipino-Japanese restaurant from Shah and Florence Mae Maglanoc’s Maginhawa Group — opened on Kentish Town Road. This July, some of that ramen, among London’s best, will arrive in Soho, when the duo launches a second branch at 28 Brewer Street. It will replace the Thai restaurant Wild Rice.

Ramo Ramen is known for its creative, clever refraction of Filipino culinary traditions, leading to singular bowls of ramen which feel in tune with the spirit of the most exciting cooking in the city right now. Oxtail collapses into creamy peanut broth in a bowl inspired by kare kare, the Filipino stew, while grilled king prawns bob in a broth pursed by tamarind and lime in a rendition of the soup, sinigang. The long-cooked stocks, alkaline noodles, golden-yolked eggs, and sheets of nori are the holdovers from Japanese tradition, while everything else is a tribute to Shah’s Filipino-Muslim background. That means tonkotsu — the ramen style reliant on creamy pork broth that overtook London in the early 2010s, and on which the city now feels a little over-dependent — is nowhere to be found.

“There was hardly any offering for non-pork variations of ramen, no restaurant that focussed on that, from what I knew. I’d grown up with a Catholic mother and a Muslim father, and pork — it’s a big part of Filipino culinary culture, but Muslims of course don’t partake in it.”

The Soho restaurant will focus on the two dishes — the kare kare and sinigang — that have proven most popular, and take their bases of beef and seafood broths as jumping off points for new dishes; perhaps smoked brisket, perhaps wagyu. Shah also wants to put gratinated sushi on the menu, and tsukemen, the Japanese dish that nerds insultingly call “deconstructed ramen,” on the menu, again because it’s rarely seen thanks to the work required. “I understand restaurants would say, ‘why would I sell a dish like that, at the same price as my bowl of ramen that costs less and takes less time?’ That’s the challenge with expanding Ramo Ramen — how do I maintain the creativity of the dishes, while having that quality evenly distributed through my branches?”

For the tsukemen, Shah has used existing bases — chicken ramen broth and the restaurant’s karaage marinade — so that it can be made genuinely new without overextending other parts of the kitchen. It harks back both to to the ramen that caught his attention, a kosher restaurant making an equivalent broth to tonkotsu from chicken wing tips and feet on YouTube, and to chicken sopas, the Filipino soup of comfort and convalescence that inspires another of Ramo’s staple bowls.

The new location is also challenging one of Shah’s key precepts about how to make a restaurant welcoming to as many as possible. “My dad never served alcohol at bintang for religious reasons, and out of respect for my father and religion I never deviated from that. But that’s a concession to make to Soho — where you’re located, the rents you have to pay — it’d be very difficult to not have a drinks program.” Split between Mamasons’ locations in Kentish Town and central London, and now Panadera — its new Filipino bakery, putting out bijou calamansi meringue tarts and hefty corned beef hash sandos, also in Kentish Town — and this new Soho build, the duo have been uniquely positioned to see the disparities in how COVID-19 has affected the city. “Chinatown was a ghost town, but the neighbourhoods ... The neighbourhoods were popping. People going out to bakeries, cafes, shops they would normally just walk past.”

Plans for another Maginhawa restaurant, Guanabana, also illustrated the seismic shifts restaurants have had to adapt to. “I finished a huge indoor extension for Guanabana in 2019, two massive rooms over two shopfronts, space for 70 people, all in one room, it was perfect. And then...,” Shah said.

But one of those now unusable massive rooms would fulfil another need: A central production kitchen for the pandesal buns and other bakes that Mamasons churns through week in, week out. Gunabana was cut down by half, and the space became Panadera, the new bakery. “Two birds with one stone. A new brand and a production facility for Mamasons as well,” he said. “The neighbourhood and Filipino community really embraced us, and Panadera ... It wasn’t even a thought before. But everything forced us to think on our feet.” Now, Mamasons, Guanabana, Moi Moi — known for its suya — Panadera, and Bintang hold down a strip of Kentish Town Road, while Mamasons is imminently opening another site at Westfield London in White City.

Things are hectic, but the energy and buzz — something, for all its faults as a hostage to developers, Soho will never really lack — are clearly positive influences. “It’s funny because Ramo Ramen and Mamasons Chinatown opened up in the same year, and we find ourselves in the same boat right now, with Westfield and Soho coming up at the same time. It would be silly if we let this pass. Even if we’re probably going to bite off more than we can chew, which has almost been our year.”