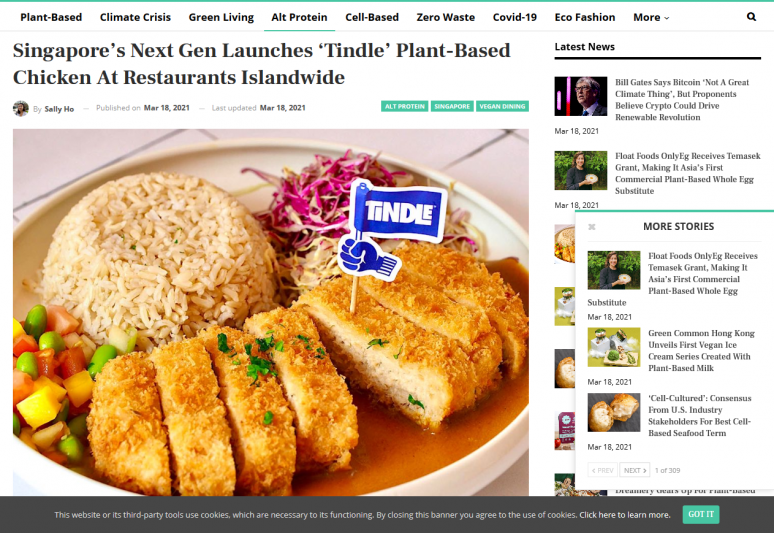 Singapore-based startup Next Gen Foods has officially launched its plant-based chicken brand Tindle, debuting at 11 restaurants across the city. The foodservice roll out will include establishments run by Michelin-starred chefs, with dishes inspired from cuisines all over the world, from Mediterranean to Japanese, as well as American-style food truck takeout classics.

Next Gen Foods has debuted its consumer-facing alternative protein brand Tindle in Singapore today (March 18), with 11 restaurant partners islandwide launching new dishes featuring its plant-based chicken substitute. Developed with chefs, food scientists and industry experts, the brand’s first product, Tindle Thy, is made from non-GMO plant-based ingredients such as soy, coconuts and sunflower oil, boasts 17 grams of protein per serving, and is cholesterol-free.

Three of the restaurants partnering with Next Gen for the much-anticipated launch of its first commercial product are headed by Michelin-starred chefs, including Chef Mural Manjunath of Adda, who won the first Michelin star in Indian cuisine at his previous restaurant and will be serving a Tindle Pot Pie.

Levant, a restaurant run by Chef Beppe DeVito’s Il Lido Group, which boasts over five Michelin-starred establishments, has prepared a Tindle Chicken Manakish, while The Market Grill, operated by Unlisted Collection, a group with five Michelin stars in total, plating up a Tindle Chicken Strudel.

Other exciting dishes that diners will be able to taste include Tindle Katsu Curry at Privé, a Sesame-Crusted Lemon Tindle at Empress, and What The Cluck, a fried Tindle chicken sandwich at renowned food truck The Goodburger, whose other plant-based options are made using the famous Impossible Foods patty.

Group Executive Chef Adam Penney has designed four dishes featuring Tindle for Three Buns, one of the most well-known burger joints in town, including The Big Cease, which features a buttermilk-fried Tindle fillet topped with caesar sauce, and From Russia With Love, inspired by the classic chicken kiev, and stuffed with miso, parsley and butter and topped with garlic aioli.

Speaking about the experience of partnering with Next Gen, Penney said: “Tindle is versatile, delicious and extremely easy to work with. It has allowed me to expand my creativity and develop items that I know my customers will truly love. It has raised the bar in plant-based foods.”

Next Gen first teased the roll out of Tindle earlier this year in February, when it bagged US$10 million in a record-breaking seed round for the global plant-based industry, which saw participation from big players such as Temasek and K3 Ventures, as well as angel investors including Michal Klar and Simon Newstead.

At the time, the Singapore food tech said the capital will fuel the launch of Tindle, as well as its expansion plans to take its plant-based chicken analogue to neighbouring Asian cities and to develop more plant-based products in the future.

Speaking to Green Queen Media, Next Gen COO Andre Menezes, who previously managed Country Foods Singapore, one of the companies behind Impossible Foods’ distribution across Southeast Asia, and co-founded the startup with fellow plant-based veteran and LikeMeat founder Timo Recker, said: “Tindle Thy will first be available in some truly great restaurants across Singapore.”

“With Tindle Thy we want to deliver a fantastic culinary experience, made from sustainable food,” Menezes continued. “Tindle was developed with chefs and for chefs.” 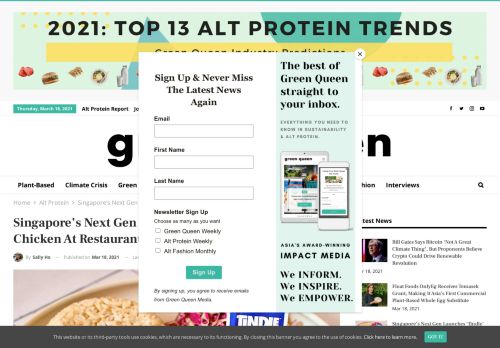 This article has been aggregated from www.greenqueen.com.hk and they maybe/are the copyright owners of the same. If you are the Author/Copyright owner of this article and want us to remove the same then send an email to admin@blog.restaurant so that we can delete it immediately. We sincerely regret and apologies for any inconvenience caused to you due to the same. Though it is your decision but please take note that the link to your website and the article have been given above, within and on the bottom of the article.