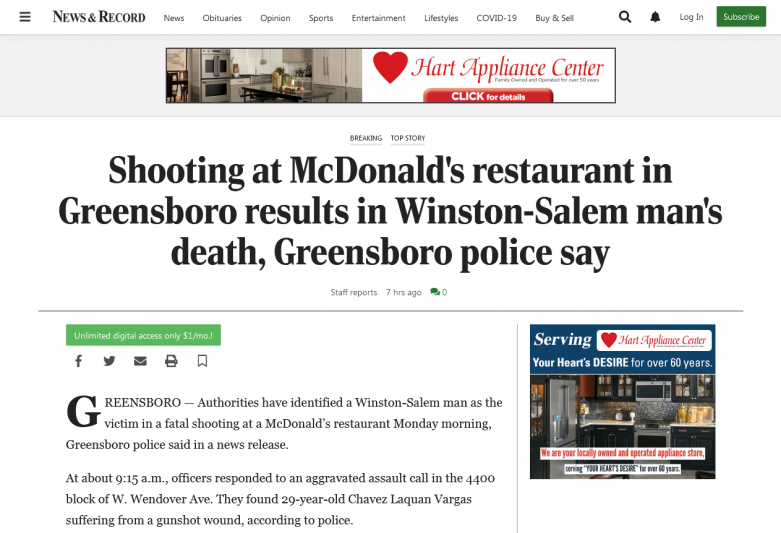 GREENSBORO — Authorities have identified a Winston-Salem man as the victim in a fatal shooting at a McDonald’s restaurant Monday morning, Greensboro police said in a news release.

At about 9:15 a.m., officers responded to an aggravated assault call in the 4400 block of W. Wendover Ave. They found 29-year-old Chavez Laquan Vargas suffering from a gunshot wound, according to police.

Vargas was taken to a hospital, but police announced at about 2:15 p.m. that he had died from his injuries.

No suspect information was available, police said, and the investigation is underway.

In December of 2014, Vargas was injured in a double shooting in Winston-Salem.

Vargas and another man were shot and wounded in the parking lot of a shopping center off Hanes Mall Boulevard, according to a story in the Winston-Salem Journal.

Vargas, who was 23 at the time, was shot once and taken to Wake Forest Baptist Medical Center in critical condition.

At the time, police said the shooting was not random and that the people involved knew each other.

This article has been aggregated from greensboro.com and they maybe/are the copyright owners of the same. If you are the Author/Copyright owner of this article and want us to remove the same then send an email to admin@blog.restaurant so that we can delete it immediately. We sincerely regret and apologies for any inconvenience caused to you due to the same. Though it is your decision but please take note that the link to your website and the article have been given above, within and on the bottom of the article.