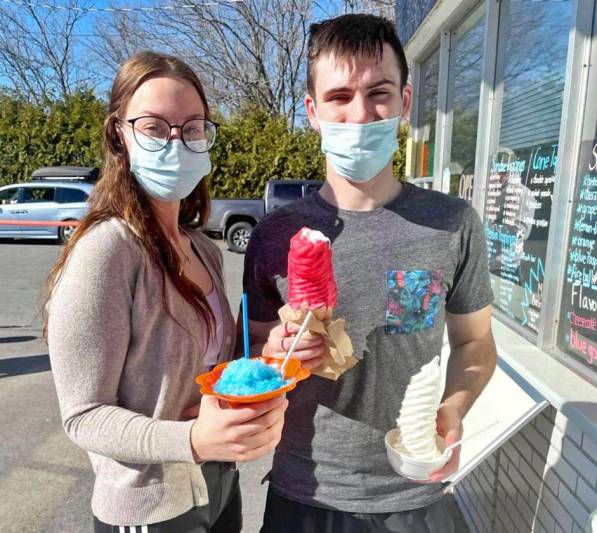 His Route 22 ice cream and food stand, situated less than a mile from Beekmantown Central School, began serving up cones and other seasonal favorites over the weekend.

“It’s the first sign of spring for a lot of people,” Deno said. “The energy is always there; kids are happy to see you.”

The stand is operating under the same COVID-19 safety protocols as last year, including social distancing, face coverings and a requirement that patrons chow down in their vehicles, not at the site’s typical picnic tables.

While specials will soon be introduced, as well as an expansion to ice cream cake offerings, Deno said the dairy shop’s menu had largely remained the same. In addition to soft-serve ice cream, the stand offers a weekly non-dairy option, sundaes and flavor bursts, as well as hot dishes like Michigans, poutine, chicken strips and fried dough.

“It’s always our busiest time of the year when we first open. You see the regulars that have been coming for years that you get to reacquaint with.”

Despite the rush of customers, the owner said Udder Delight hadn’t run out of any favorites over the weekend.

“We’re usually pretty well stocked,” he said. “We know what to expect; we’ve been at it long enough.”

Here’s a compilation of other seasonal hot spots across the region and their opening days:

Donnelly’s Ice Cream at 1556 Route 86 in Saranac Lake: Opening in May.

Tail O’ The Pup barbeque restaurant at 1186 Route 86 in Ray Brook: Opening in May.

Today's breaking news and more in your inbox

This article has been aggregated from adirondackdailyenterprise.com and they maybe/are the copyright owners of the same. If you are the Author/Copyright owner of this article and want us to remove the same then send an email to admin@blog.restaurant so that we can delete it immediately. We sincerely regret and apologies for any inconvenience caused to you due to the same. Though it is your decision but please take note that the link to your website and the article have been given above, within and on the bottom of the article.