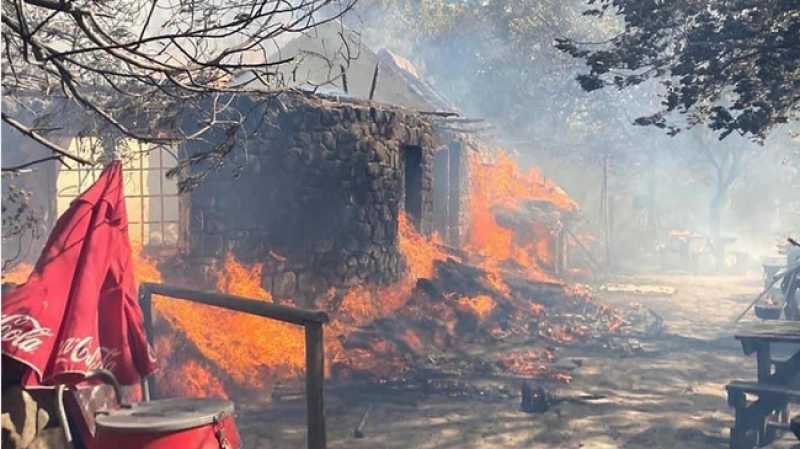 Cape Town – The employees of the Rhodes Memorial Restaurant and Tea Garden, which was gutted in last week’s wild fire, are bracing for the impact the destruction will have on their livelihood.

The historic restaurant was one of three landmarks – the others being the Mostert’s Mill and UCT’s Jagger Library – which were damaged by the Table Mountain inferno that swept from Rhodes Memorial to Devil’s Peak for three days last week.

Manager of the historical restaurant, Jessica Lyon said it was devastating and frightening how quickly it all happened.

“While patrons were enjoying their meal, we suddenly noticed a black cloud overhead and the smell of smoke enveloping the restaurant, I immediately realised that we had to act quickly,” she said.

They then moved all patrons to the bottom entrance at the lower car park. “Once that was done, we had to rush our staff to safety,” she said.

Mylah Hugo, from Bridgetown was at the restaurant when SANParks rangers told them to evacuate the area.

“When we arrived at the restaurant after 9am, we smelled smoke and could see how it was turning black,” she said.

Hugo said she could see how concerned the other patrons were and the area was starting to get warmer. “We evacuated in a calm fashion and we could also see hikers coming down from the mountain,” she said.

The Rhodes Memorial Restaurant and Tearoom, she said, had been a much loved and iconic landmark for both local and international visitors. “It is 104 years old, and it was designed by Sir Herbert Baker. A few years ago we did some upgrades to make it child-friendly.” Since last week, said Lyon, she had met with her staff to reflect on what happened and she has offered trauma counselling where needed. “It all happened so quickly and we were all caught by surprise, which not only made the entire experience traumatic at the time but will be with my staff and I for a long time to come.

“We have 26 staff members, even though reimbursement and insurance claims will be instituted, these processes take time and will take longer, especially since records and paperwork were destroyed in the fire and this will certainly impact them.”

And, she said, it would take a long time before the restaurant could be rebuilt to its former glory.

The Rhodes Memorial Restaurant staff support campaign has been initiated to raise funds to help the staff. Their aim is to collect R400 000 to tide the staff over the next two months.

Mary Hilton from the support campaign said the restaurant had, for decades, been a welcoming venue for members of the UCT community, Capetonians and countless visitors from the rest of the country and abroad.

“Staff members at the restaurant, many of whom are long standing familiar friendly faces, are now without work, even though insurance is assessing the situation it will take some time as the papers were destroyed in the fire,” said Hilton.

Lyon said she was deeply grateful for the outpouring of support from the public, many of whom had wonderful memories of enjoying meals at the restaurant.

For details on how to donate, go to the Rhodes Memorial Restaurant staff support campaign Facebook page or contact Fahiem Stellenboom at 072 265 6023, or Mary Hilton at 073 236 5783, or send an email to [email protected]

* This story was first published by the Southern Suburbs Tatler.

This article has been aggregated from www.iol.co.za and they maybe/are the copyright owners of the same. If you are the Author/Copyright owner of this article and want us to remove the same then send an email to admin@blog.restaurant so that we can delete it immediately. We sincerely regret and apologies for any inconvenience caused to you due to the same. Though it is your decision but please take note that the link to your website and the article have been given above, within and on the bottom of the article.