Restaurants Reopening: Where Do They Stand, And How Do They Recover From COVID?

Restaurants Reopening: Where Do They Stand, And How Do They Recover From COVID? 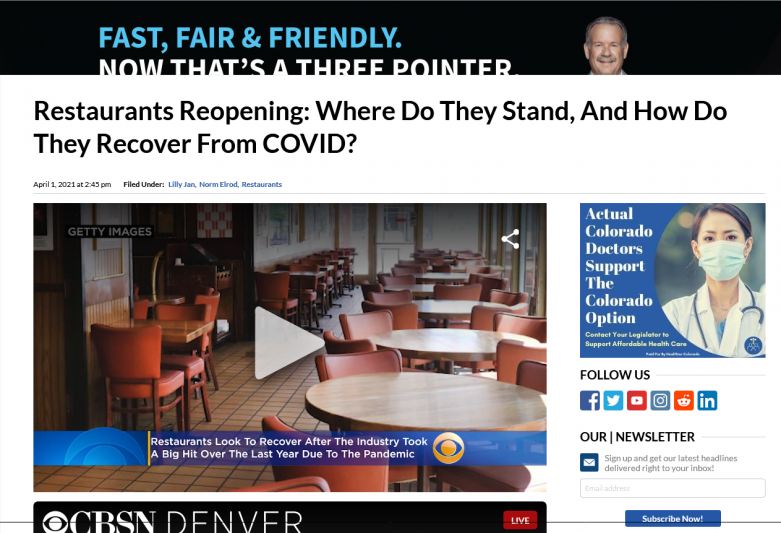 The COVID pandemic has damaged the restaurant industry and other large segments of the economy over the last year. At the outset, rules put in place to deal with the airborne virus forced establishments to close their doors for weeks in many parts of the country. Some never reopened. Others reopened, with safety measures in place, but couldn’t survive given the capacity limits. A heavy reliance on delivery and takeout just wasn’t feasible for restaurants with large dining rooms. Still, many of those not oriented toward in-person service pivoted and survived in the to-go environment.

The pandemic also illuminated some of the industry’s foundational cracks, particularly when it came to workers. “Some of the cultural problems, some of the pay problems, the labor issues that have been really kind of slowly simmering to the surface for many years,” as Lilly Jan, a lecturer of food and beverage at Cornell’s School of Hotel Administration, summed it up.

A year after that initial shutdown, where do restaurants stand and how do they move forward?

According to the National Restaurant Association’s latest State of the Restaurant Industry Report, industry sales fell by $240 billion last year, as 110,000 establishments closed temporarily or permanently and others saw a decline in sales. Most of the closed restaurants were longstanding local establishments that had served their community for over a decade and a half on average. The industry also lost 2.5 million jobs over the course of 2020. Staffing is down 20 percent for almost two-thirds of fine-dining operators and over half casual-dining operators.

The dining establishments that stayed open have adapted to the less-than-ideal situation. Indoor capacity has been limited to 25 or 50 percent in many parts of the country, which generally isn’t enough to stay in business. Many restaurants doubled down on delivery and takeout. Some expanded their dining rooms beyond their four walls to whatever outdoor space was available to them. (In big cities like New York and Boston, that could even mean adjacent parking spaces.) Others rented out extra kitchen space to separate delivery operations or extra dining room space, in off hours, to workers in need of a co-working area. Plenty resorted to some combination of these and other methods to stay afloat.

“We know that virtually every restaurant in every community has been impacted,” said Tom Bené, President & CEO of the National Restaurant Association. “Amid an ever-changing landscape of dining restrictions and widespread closures, restaurants found ways to adapt, keep people employed, and safely serve our guests.”

An economic bounceback depends on the widespread distribution of a COVID vaccine. And efforts to inoculate the public are progressing by the day. Americans have received over 150 million doses, with 29.4 percent of the population having received at least one dose and 16.4 percent completely vaccinated. Vaccination numbers continue to increase at a rate of well over 2 million doses per day. In a show of continued optimism, the President Biden increased his vaccination target from 100 million doses in the first 100 days of his presidency to 200 million doses.

Restaurants were hit as hard as any industry, and face a long road back to normal — or a new normal. Even as cities and states relax their restrictions, consumers remain leery of public spaces. And would-be diners are still hesitant to return to eating inside. Plenty of pent-up demand exists. But restaurants can’t simply throw open their doors and expect the public to return in droves. There has to be some method to the madness.

“First and foremost, you have to know your customers,” said Jan. “Some customers might be putting more emphasis on safety procedures and social distancing between tables and minimal contact time with their servers. Other places might be more tech-focused and wanting some of that. Or other places might be totally fine with a full in-person dining experience. I think knowing your audience is number one.”

But it doesn’t stop there. “Number two is figuring out a menu and a service operation that works and is sustainable financially,” Jan continued. “So maybe you don’t offer the full menu that you had before because you just can’t afford the overhead on inventory and all of those things. But maybe you want to offer a smaller, tighter menu at slightly higher prices because you’re offering a different quality or a different portion size or something like that. And you’re really honing down that menu to maximize your sales in that area. So thinking intelligently about your offerings and the tradeoffs between overhead and revenue is the second thing.”

Staying with delivery and takeout as the main source of revenue won’t generally be an option. As Jan sees it, “why would you have a front of house that you’re paying rent on, that you can’t sell? Every square foot of a restaurant matters. It needs to be generating money, which is oftentimes why the front of house looks great and is more spacious and the kitchens are much more cramped, because we want to make that floor space as functional as possible to compensate for all of the other items. So I don’t imagine restaurants that have a dining space and that were in-person dining before the pandemic will stay with only to-go.”

“I think a lot of restaurants, having seen that they can do to-go and it can be a great source of revenue, will continue that,” Jan said. “That multi-channel revenue stream is always useful. But I don’t imagine that there will be many restaurants that were in-service before that will be only to-go.”

Ultimately restaurants depend on volume for sales. And for the foreseeable future, that volume will depend on local restrictions for capacity and public willingness to eat in a crowded environment. So Jan isn’t sure that restaurants are in for a huge spike in business. “I think there’ll be an initial increased rate. All of that pent-up desire to go dine out and enjoy restaurant meals again, we’ll definitely see a small spike. But I don’t think it’s going to return to where it was pre-pandemic. I think it will slowly climb back to where we were.”

As for availability, meaning chain restaurants as opposed to local establishments, there’s still plenty of room for both. Each addresses a different need for the consumer. Big chains offer a certain level of comfort and consistency that people seek out. Local restaurants are part of the community that people are attached to and rally around.

In Jan’s estimation, “consumer interests are pretty much still divided along the same lines, pre-pandemic and now. But it’s really tough to say with consumers being very budget-conscious, and also really craving comfort and familiarity and safety. They might be leaning towards big business and the big chains. But, also, I think this year has been a lot about reflecting inwardly and looking at who can I support and what is my community like. How do I help small businesses, and places that need that support? I think a lot of people will also double down on that. So I think actually, in the end, the numbers will stay the same.”

Click Here To See More
News Source: denver.cbslocal.com
Restaurants Reopening: Where Do They Stand   And How Do They Recover From COVID? 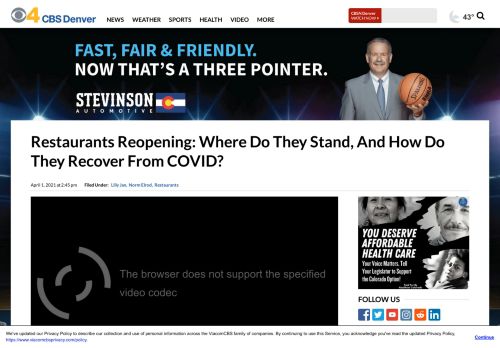 This article has been aggregated from denver.cbslocal.com and they maybe/are the copyright owners of the same. If you are the Author/Copyright owner of this article and want us to remove the same then send an email to admin@blog.restaurant so that we can delete it immediately. We sincerely regret and apologies for any inconvenience caused to you due to the same. Though it is your decision but please take note that the link to your website and the article have been given above, within and on the bottom of the article.