RESTAURANTS are facing a bleak Chinese New Year this year as an increasing number of customers have cancelled their bookings for the reunion dinners and the traditional appreciation dinners (sau kong jau) due to the latest movement control order, reports China Press.

According to Pan Malaysia Koo Soo Restaurants & Chefs Association president Wong Teu Hoon, all their bookings during the MCO period have been cancelled, as only takeaways and delivery orders were accepted.

“Delivery orders make up only 20% to 30% of our usual business, ” Wong was quoted as saying.

Wong urged the government to permit restaurant patrons to dine in on Chinese New Year eve, which falls on Feb 11 this year, which would help restaurant operators reduce their losses.

“Not only during the eve but we hope the government would allow us to operate during the entire Chinese New Year period. If the MCO is not lifted, our dine-in revenue will continue to be zero, ” he said.

Despite the disruption to business caused by the pandemic, Wong reassured workers who work during the Chinese New Year that they will still be given double pay.

Wong, whose image is still marred by her dalliance with married singer Andy Hui back in 2019, was seen quickening her steps when met with members of the press who were keen to know if TVB would release her from her contract or whether she plans to relocate to Canada after the pandemic ends.

She kept mum and only said “thank you” before hopping into a minivan with her sister and leaving.

It was reported that Wong was said to be on unpaid leave for 20 months since the scandal broke.

A source revealed that Wong signed an eight-year contract with TVB but has not received any work from them.

It is believed that Wong wishes to restart her career by transitioning to an off-screen role such as writing and producing.

> Taiwanese aboriginal singer A-Mei refuted rumours that she will be running as the representative for the Lowland Aborigine Constituency, reports Sin Chew Daily.

Reporters contacted the 48-year-old singer’s manager who denied the claims, saying that they were “too creative!”.

The above article is compiled from the vernacular newspapers (Bahasa Malaysia, Chinese and Tamil dailies). As such, stories are grouped according to the respective language/medium. Where a paragraph begins with this ' >'sign, it denotes a separate news item. 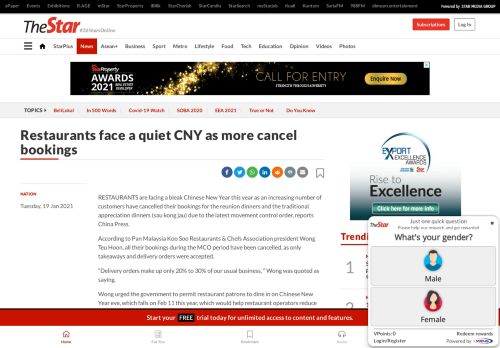 This article has been aggregated from www.thestar.com.my and they maybe/are the copyright owners of the same. If you are the Author/Copyright owner of this article and want us to remove the same then send an email to admin@blog.restaurant so that we can delete it immediately. We sincerely regret and apologies for any inconvenience caused to you due to the same. Though it is your decision but please take note that the link to your website and the article have been given above, within and on the bottom of the article.