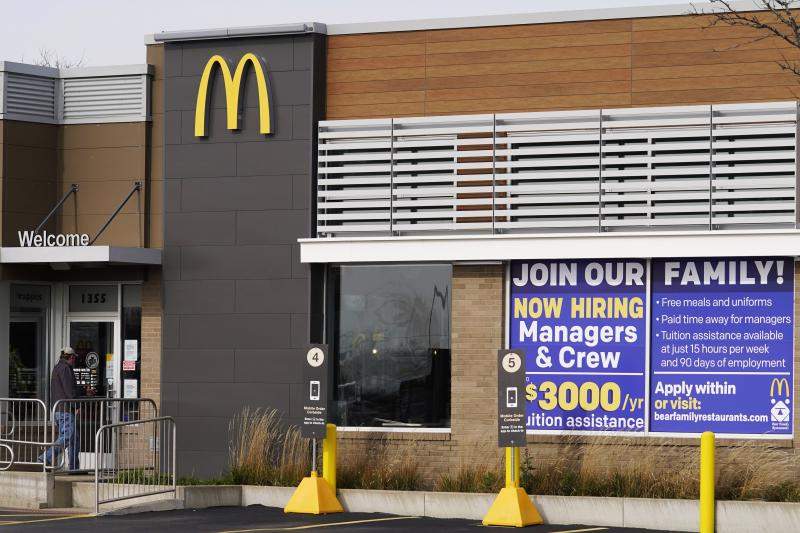 Restaurant owners are having a hard time finding—and keeping—staff more than a year into the COVID-19 pandemic. They say many workers left the industry for better pay and more stability, and that’s making it hard to staff enough people to keep operations running smoothly.

But restaurant workers, current and former, say COVID is not entirely to blame. They say the industry has always had its share of issues.

Danii G., 23, worked full-time at McDonald’s when the pandemic hit. Within a week, her hours got cut from 35 down to just five or six.

That was unsustainable for Danii, who asked that we only use her first name to protect her employment.

To fill the gap, Danii picked up work at Under the Ground BloNo, a vegan and vegetarian meal prep service.

Danii said it was a bit of a culture shock—in the best possible way. She was getting paid $1.50 over minimum wage. For the first time, she felt like her employer cared about her well-being.

Danii remembers having to call out of work after suffering an allergic reaction.

“I didn't have to write a doctor's note for my boss, I just called them up and I was like, 'Hey, I've got this allergy.' And they're like, 'OK, cool. Just take a day off.' Not only do they give me a day off, but first time in my life, I got paid sick leave," she said.

At her fast food job, Danii said calling out sick could’ve gotten her in trouble, on top of losing out on much-needed money. She left fast food for a while during the pandemic, but recently rejoined McDonald’s. Danii said they tried to hire her back for minimum wage. She said no. A few days later, she said they bumped up the wage out of desperation.

Danii now makes $14.50 as a shift manager and works a second part-time job. She said McDonald's is still struggling to bring in crew members.

“We just hired 10-15 people about a month ago and none of them still work for McDonald's because they found other jobs that are willing to pay them well over minimum wage, not in the fast food industry," she said. "I've worked in fast food for a while now. It's demeaning. It's horrible work. I get yelled at, I get cussed out, I get food thrown at me on a daily basis. On top of we're in the middle of a pandemic and I'm risking my personal health to work for you—and you're not paying a livable wage.”

“We are busier than we've ever been since the pandemic started. People that have been there for a while are quitting now because they're burnt out," she said. "I've had my coworkers sit in chair crying, (break down) and walk out of the store. I don't blame them. It's frustrating.”

There were around 6,100 restaurant jobs in McLean County as of September 2020, according to the most recent data available from the U.S. Bureau of Labor Statistics. Restaurant workers held about 9% of all jobs at that time.

The September figures rebounded from the earlier in the pandemic, but were still down 18% from the same month in 2019.

Creighton Budris, 25, took his first restaurant job last summer as a dishwasher at a locally-owned restaurant downtown. He only lasted three months.

“It was just not worth the money for how hard the work was. Once the pandemic was really involved and it was clear how unsafe they were being, I didn't feel like it was worth risking my safety or spending my time for such little reward," Budris said. "I haven't really had a physically harder job than that—just hunched over a sink for eight hours.”

Budris said servers would come in the back and take their masks off immediately. He said none of the cooks or managers wore a mask, either.

Budris said COVID safety precautions aren’t much better at the vape shop he works for. But other parts of the job are more manageable—and the pay is comparable. Budris adds he's not afraid of hard work. He's done landscaping gigs in the past and would consider taking another restaurant gig under different circumstances.

Some restaurant owners claim people don’t want to take their jobs because pandemic relief and unemployment payments are equivalent to restaurant wages.

Those who have worked for those wages disagree.

“The idea that people are by and large just on unemployment, like, that's really silly," Budris said. "The unemployment system is really, really, really hard in this state. It takes forever to get it, and they kick you off of it on a moment's notice. And then as you go through the whole process, again, no one wants to do it. Also, we naturally don't want to just sit around like that.”

Restaurant work can be lucrative—particularly for tipped employees, like servers or bartenders.

Michael Swanson, 24, left a job at Walmart and started serving at a corporate restaurant in March.

“Ever since I started, business has been booming," Swanson said. "There are times where I walk into work, and (someone’s) already asking me, ‘Hey, do you want to take a table?’ and I haven't even clocked in yet." Swanson has worked in restaurants on and off. He said switching to retail gave him another perspective on low-wage jobs.

“Having to go to work, driving across town a 15 minute commute one way, work for $11 an hour, and not even be getting full time and barely able to meet your expenses and have creditors calling you and breathing down your back—that really takes a toll on you mentally as much as physically," Swanson said. "Now, by comparison, I am about three weeks into being a server at this restaurant and I've already been able to make enough money to pay my bills.”

But Swanson said that’s not the case everywhere. He said one of the most difficult things about restaurant work is the inconsistency of hours and tips.

On employer wages alone, Swanson said, the work is unsustainable.

The minimum wage for tipped restaurant workers is 60% of what other hourly workers make. The tipped minimum wage in Illinois is currently $6.60. It’s gradually increasing along with the hourly wage.

Swanson said if he had his way, restaurant workers would be paid the hourly minimum and still be able to make tips.

“Honestly, for the work that servers have to do—alongside the rest of the restaurant staff—I don't think they get paid enough to deal with half the things that they have to deal with," Swanson said. "That's coming from someone who had a year-and-a-half break from the industry.”

On top of low pay, Swanson said the workplace culture can be a nightmare, depending on the restaurant.

“If you're lucky, you'll get a staff of people that genuinely care, that are in the industry to do the work, make people happy and feed the community," he said. "But then, there are also people that are absolute party animals.”

Swanson said he has limited sympathy for restaurant owners who say they can’t find workers. He said if restaurants can’t afford to pay workers a living wage, they shouldn’t be in business.

“If people want to play in this free market capitalism level of ideas, then you can't be mad if one of your workers gets poached by Target because Target pays better," he said. "You found the issue of why they got poached. And now you, as a business owner, have to make that response.”

Restaurant workers say these problems won’t go away with the pandemic. They say the restaurant industry has reached a point of reckoning.

Higher pay is a start, they say. But to truly make the industry tenable for employees, they’re looking for benefits like health insurance, retirement plans, and parental leave.

There's no subscription fee to listen or read our stories. Everyone can access this essential public service thanks to community support. Donate now, and help fund your public media.

This article has been aggregated from www.wglt.org and they maybe/are the copyright owners of the same. If you are the Author/Copyright owner of this article and want us to remove the same then send an email to admin@blog.restaurant so that we can delete it immediately. We sincerely regret and apologies for any inconvenience caused to you due to the same. Though it is your decision but please take note that the link to your website and the article have been given above, within and on the bottom of the article.