Reservations for The Blue Dog have been streaming in for days, with dinner seatings fully booked for its first week. Popular for brunch in New York, the Boca outpost... 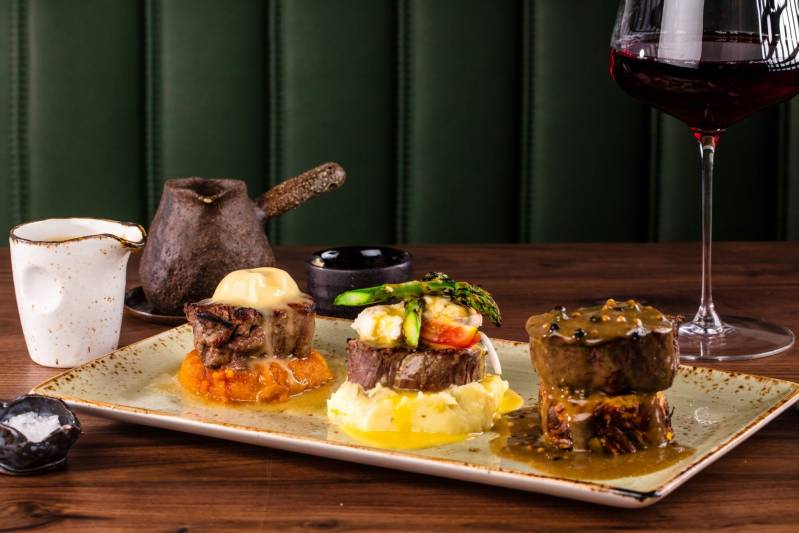 Reservations for The Blue Dog have been streaming in for days, with dinner seatings fully booked for its first week. Popular for brunch in New York, the Boca outpost will offer brunch daily.

The Blue Dog, which has breathed new life into the former Zinburger Wine and Burger Bar space at the Town Center mall, is known for its polished approach to American comfort dishes. In New York, its theater-district restaurant is a popular brunch spot that often has a two-hour wait for brunch, says owner Armando Soto.

“Once you come to the restaurant and experience the food and the service, you’ll understand the reason why,” he said of The Blue Dog, which was founded in 2006 and later underwent a menu expansion and concept shift (from café to full service restaurant).

At the new Boca Raton location, more spacious than the Manhattan restaurant, brunch will be served daily, just as it is in New York, as well as lunch and dinner.

Soto and Blue Dog founder and operator Elizabeth Slavutsky chose Boca Raton for their first Florida location because they saw promise in the area's energy and growth. They also saw a pandemic-era shift in a once-seasonal market. Slavutsky, who has been a part-time resident of South Florida for several years, says she has witnessed a shift to year-round residency in the Boca Raton area.

“There was a great deal of market research done before securing this space. You used to see some fluctuation, but now there’s no fluctuation,” she says.

With the influx of northerners comes transplanted expectations, she says.

“Boca has been and continues to be the sixth borough of New York. The people from the Northeast expect an experience that they’re satisfied with, from the taste to the service. That’s what I want to bring to the community,” says Slavutsky.

Days before the restaurant’s opening, diners seem equally eager. Dinner service at the 220-seat restaurant is “fully committed” for The Blue Dog’s first week, says Slavutsky. And reservation requests for Easter Sunday brunch on April 17 have been streaming in for days, she says.

“I highly encourage people to make reservations. We take them only 30 days in advance,” says Soto.

What to expect on Blue Dog Cookhouse's menu

Diners can expect large, diverse menus that aim to accommodate a variety of appetites. The menu is designed to “appeal to everybody and anybody,” says Slavutsky.

“We don’t have a specific cuisine. It’s a blended menu, allowing for us to explore our creativity, which makes it more fun,” she says.

Heftier plates include shareable steak plates like a dramatically presented filet mignon trio in which each filet has a different topping and starch bed, a 32-ounce prime tomahawk and a 48-ounce porterhouse.

Add to that a range of pasta dishes like truffled wild mushroom gnocchi and seafood tagliatelle, signature burgers and entrée-worthy salads. And there's a full cocktail bar directed by veteran mixologist and beverage manager Nesha Korak.

The Boca dinner menu, for instance, is different from that of New York’s.

“The dinner menu is a far more elevated concept,” she says. “The plan is to mirror that back to New York once we have it in full force.”

“We have handcrafted wood tables that are American-made, without the white tablecloths. It won’t feel stuffy here but the level of food quality will surpass your expectations,” says Slavutsky.

The Blue Dog’s debut in Boca Raton is just the first step in a larger expansion plan for the brand, she says.

“There’s great opportunity for expansion here. Everyone who has moved to Florida, we’re like-minded individuals and share expectations when it comes to the dining experience,” says Slavutsky.

“I’d love for it to begin in Florida,” he says. “I really believe Florida will become the financial center of the world.”

The Blue Dog Cookhouse and Bar

Reservations can be made on the website at BlueDogBoca.com/visit. 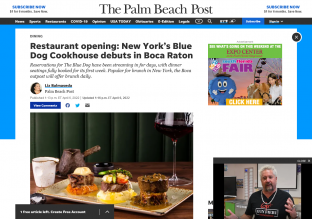 This article has been aggregated from www.palmbeachpost.com and they maybe/are the copyright owners of the same. If you are the Author/Copyright owner of this article and want us to remove the same then send an email to admin@blog.restaurant so that we can delete it immediately. We sincerely regret and apologies for any inconvenience caused to you due to the same. Though it is your decision but please take note that the link to your website and the article have been given above, within and on the bottom of the article.