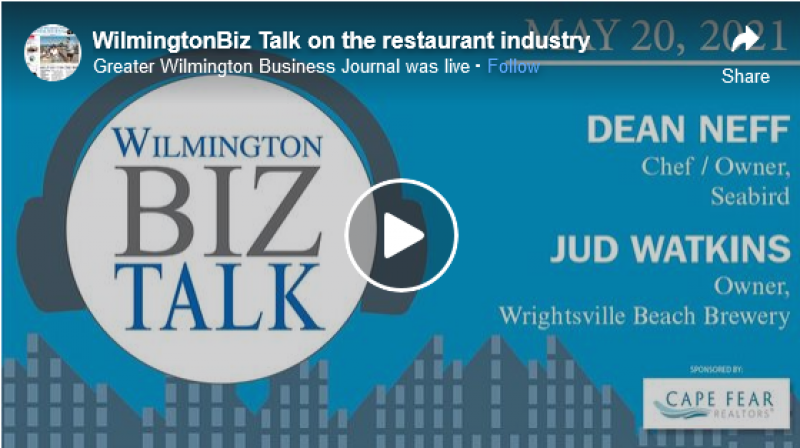 Two prominent figures in Wilmington’s restaurant scene recently shared their thoughts on the current state of the industry on WilmingtonBiz Talk. Dean Neff, chef and owner of the recently opened Seabird Restaurant, and Jud Watkins, co-owner of Wrightsville Beach Brewery, spoke about navigating staffing shortages for the upcoming tourism season and changes in COVID-19-related rules and regulations.

Watkins said Wrightsville Beach Brewery has been fortunate to be busy all spring, in part due to the mild temperatures, and his brewing staff is working overtime to keep up with the demand. And Dean, who just opened the doors to Seabird one month ago, said downtown has been bustling with people every day of the week since early spring. Both believe it will be a busy summer season across the region.

Watkins said historically he receives a steady flow of resumes at this time of year, but for the first time since opening in 2017, he had to post ads on social media and job sourcing sites such as Indeed.com.

According to the National Restaurant Association, restaurants are typically the nation’s second largest creator of seasonal jobs during the summer months – ranking just behind the construction industry. In the five years prior to the pandemic (2015-2019), bars and restaurants added an average of 511,000 jobs during the summer season. During those same years, North Carolina added an average of 15,200 seasonal summer jobs.

While much of the public seems eager return to their favorite bars and restaurants, there is a great deal of discussion about why hospitality workers are hesitant to return to work. Debates about living wages, health insurance and the extension of enhanced unemployment benefits are all at the forefront of the discussion nationally.

In a National Restaurant Association survey conducted earlier this month, 72% of restaurant operators said recruiting and retaining employees was their top operational challenge. That was up from 57% in April, representing the highest reading in the nearly 20-year history of the association’s monthly tracking survey.

“Owners are being forced to do a better job of being good to their employees,” Watkins said. “We need to find ways to make restaurant workers' lives better and more sustainable.”

Watkins noted that he believes the stresses on workers in the hospitality industry increase each year.

Both Watkins and Neff also noted that the CDC’s latest recommendations and the state’s revised policies came quicker than expected, and are asking diners to be patient as they continually revise policies for both staff and customers.

“Staff are dealing with with SOP procedures changing on a weekly if not daily basis,” Watkins said. “Please have patience and please treat employees respectfully.”

Listen to the entire conversation below.

BizTalk is livestreamed on the Business Journal's Facebook page each week at noon Thursday. For notifications on upcoming topics, sign up for newsletters at wilmingtonbiz.com/register and to submit topic or speaker ideas, email [email protected].

Have a tip for Restaurant Roundup? Email us at: [email protected].

This article has been aggregated from www.wilmingtonbiz.com and they maybe/are the copyright owners of the same. If you are the Author/Copyright owner of this article and want us to remove the same then send an email to admin@blog.restaurant so that we can delete it immediately. We sincerely regret and apologies for any inconvenience caused to you due to the same. Though it is your decision but please take note that the link to your website and the article have been given above, within and on the bottom of the article.