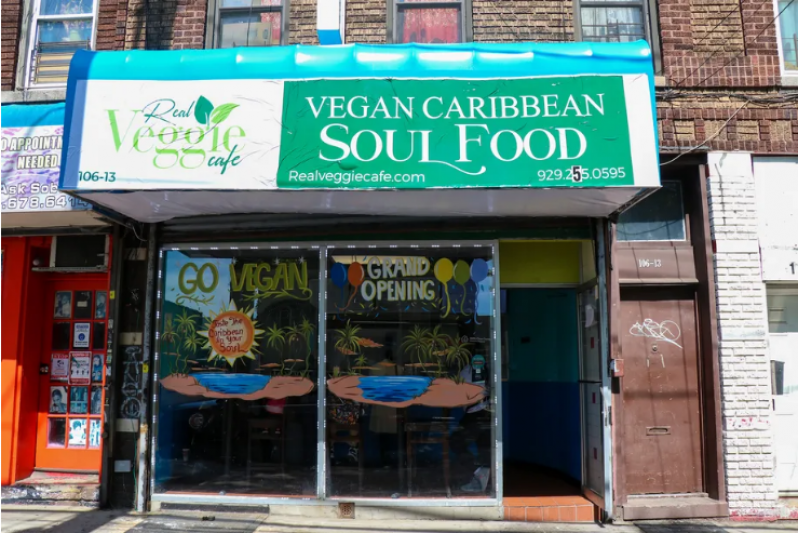 The vegan boom in New York continues with this month’s opening of the family-run Real Veggie Cafe in Jamaica, Queens, which focuses on a mashup of southern Black American soul food and Caribbean cuisine based on meat-free cooking. Located at 106-13 Guy R Brewer Boulevard, it joins a select group of vegan Caribbean restaurants such as Richmond Hill’s Veggie Castle II and Crown Heights’s Ital Kitchen BK, which specializes in Rastafarian food.

Here, chef and owner Hulando Shaw cooks soul food classics like fried chicken, black eyed peas, and collard greens, and Caribbean staples like jerk chicken, rice and peas, and ackee and saltfish — all with a vegan riff. Take for instance: double-battered mushroom nuggets ($10-15, as an appetizer or in a bowl format) that could easily pass as fried chicken wings. He dips oyster mushrooms into wet and dry batters containing Caribbean spices like allspice, black pepper, turmeric, and thyme before pulling and squeezing them together to resemble chicken. They’re currently offered in three flavors: jerk, barbecue, and sweet heat that’s fueled by Scotch bonnets. Ackee, a pulpy fruit related to lychee and crucial to Jamaican food, is another flavor that will debut shortly. The vegan, cross-cultural fusion also appears in Shaw’s black-eyed stew peas, traditionally made with red kidney beans in Jamaica ($5 side dish); a “pulled pork” sandwich with shredded jackfruit baked in a barbecue sauce ($10 with fries); and “salting”, a soybean protein that replaces the traditional salt fish, and comes with a choice of ackee or callaloo (part of a $15 Sunday brunch menu). He also plans to occasionally offer mushroom-based “oxtail stew” and mock jerk chicken.

Hulando Shaw (l) is the chef of Real Veggie Cafe The wide-ranging menu draws from Shaw’s cultural background, religious practice, and focus on community. By age 10, Shaw says he “ran boats” in St. Andrew Parish, five miles north of Kingston. “All the young men would get together, and everybody would be in charge of cooking different things,” says Shaw, who added that this tradition of young men gathering outdoors to cook and eat together laid the foundation for his future as a chef.

After following his mother to Jamaica, Queens, in 1995, his devotion to the Protestant Christian denomination of Seventh-Day Adventism, which emphasizes personal health and diet, led him to convert to an all plant-based diet in 2004. “I started looking at the body and how the body was created, and how it can heal itself” with “the right fuel,” Shaw says. “It’s just like a car. If the car requires you to put regular unleaded, and you’re putting diesel in your body — in your car — then what will happen is that the car will actually move but it will eventually break down. And that’s where the plant-based diet comes in.”

Shaw began cooking his vegan Caribbean recipes for church meetings. From there, his culinary career took off. In 2007, he started his Real Veggie catering company in Laurelton, Queens, and took over various chef roles at Andrews University in Michigan and Laurelbrook Academy in Tennessee. He returned to New York in 2017 to establish a brick-and-mortar operation in Island Park, Long Island, which he closed during the pandemic and transitioned to weekly pop-ups.

“I got sick in January of 2020 so we decided that we have to reevaluate,” Shaw says. “We found a really cool space in Lynbrook [Long Island] that allowed us to actually do pop-ups during this COVID time.”

A bowl of vegan food Community is a pillar of Shaw’s work. Last year, he helped cook and deliver over a thousand meals per week to the residents and essential workers of southeast Queens through his partnerships with Queens Together, Black Resource Network, New York State Senator Leroy Comrie’s office, and his church in their shared mission to combat food insecurity in the borough, once the epicenter of the pandemic. In early 2021, Shaw launched his Real Veggie cooking school, where he teaches children ages 8 to 12, mostly from the Caribbean countries of Jamaica, Trinidad, and St. Vincent how to cook vegan food. “If you teach a child how to cook healthy from the beginning, they will actually continue a healthy practice, going onwards.”

Around the same time, Shaw took over the lease of a restaurant previously owned by a colleague who asked that he preserve the soul food concept and continue to feed Jamaica’s predominantly Black American community.

“So that’s how I mixed my Caribbean roots with a soul food concept,” Shaw says. “Let’s actually open a restaurant and meet a community where they are.”