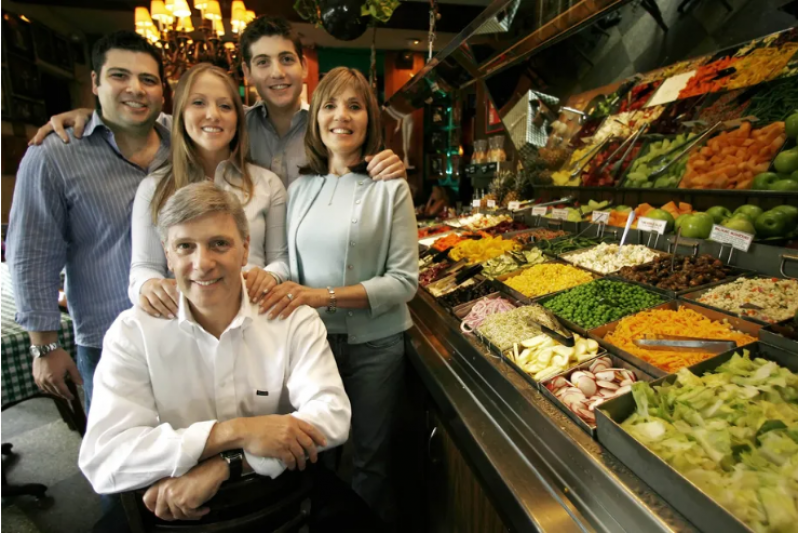 Allison Hall sounds like a girl’s name, but is not in fact a person. It’s a building, a residence hall on the south campus at Northwestern University. All-female, when I attended school there in the late 1970s. But in the basement, food service was provided. Undergraduates from nearby dorms would troop over for our cold cheeseburgers and slices of bland pizza and all the chocolate milk we could drink, which was a lot.

Except on Sundays. On Sundays, the food service at Allison and across campus shut down, I’m not sure why. So cafeteria workers could thank the Lord, perhaps. Or to force students from under the wing of academia, out into the mean streets of Evanston to forage for ourselves. Part of the education.

Or not. I seem to recall a lot of big coffee cups filled with several servings of Quaker Apple & Cinnamon Instant Oatmeal. Though we did also grab cheeseburgers at The Hut or, if we were feeling celebratory, head over to brunch at Fritz That’s It.

Another odd name. Fritz was the second restaurant begun by Rich Melman, who would go on to a legendary career as the most popular Chicago restauranteur with his Lettuce Entertain You Enterprises. Fritz was food as fun, and offered something new and exciting: a salad bar. The one at Fritz had not only the usual bowls of iceberg lettuce and mounds of shredded cheese, but cream cheese with chocolate chips, and graham crackers to spread it on. Decadence.

Plus caviar. I can still see my 18-year-old self, piling a Ritz cracker with the salty black caviar from the salad bar at Fritz and just staring at it, held six inches from my noses, marveling, agog that I, Neil Steinberg, a schmendrick with a bowl haircut from Berea, Ohio, was now gorging on caviar on the periphery of a major metropolis with my similarly blessed pals, skyrockets one and all, fuses lit, about to go whizzing toward unimaginable greatness.

Restaurants are little stages upon which we live our little lives. And one of the incalculable losses of COVID-19, along with the 600,000 dead and the jobs vanished, weddings scrubbed and the trips not taken are all the meals, communal and solitary, savored and wolfed down, luxe and modest, that we did not eat in all the restaurants that were shuttered, some permanently.

It’s hard enough for restaurants to survive without a plague. An estimated 90% fail in the first year, with the average lifespan being about five years. Which is why I feel compelled to remark upon the wonder that Melman’s first restaurant, R. J. Grunts in Lincoln Park, is marking its 50th anniversary Thursday, having survived Vietnam, Nixon, several recessions and wars, Five Guys and, most recently, a plague.

The doors swung open June 10, 1971, at 11:31 a.m., a time immortalized on their menus, which are goofy in a Grateful Dead meets Robert Crumb cartoonish fashion. The place is known for its casual vibe and capacious burgers, but the meal-in-itself salad bar there was believed to be the first in the continental United States, Melman having read about rudimentary salad bars in Hawaii, of all paces.

I could fill 10 columns with tales from Melman’s various restaurants — his Lettuce Entertain You Enterprises has some 120 in Chicago and nine states — past and present, each with its own particular memories. Ed Debevic’s was an intentionally garish 1950s diner on steroids, its wisecracking servers a wonder to my boys, when young, captivated by the idea of an authority figure like a waitress giving them, mere children, grief over their orders. There is Wildwife, Joe’s Seafood, Petterino’s. He bought the Pump Room, because he could. Not to forget Scoozi, a sprawling Italian Ohio Street eatery designed to be like a scene in a Fellini movie. Recorded Italian conversation was piped into the bathrooms. That kind of detail kept you coming back. Well, that and the gnocci.

You can’t slide by R.J. Grunts Thursday — it’s closed for a rolling, socially-distanced, afternoon-long private birthday party. But do go there, or some other favorite place. I know we’ve fallen out of the restaurant habit. Time to get back in it. We aren’t here forever, nor is any given restaurant, and what better way to celebrate surviving COVID and emerging from our lockdown caves? 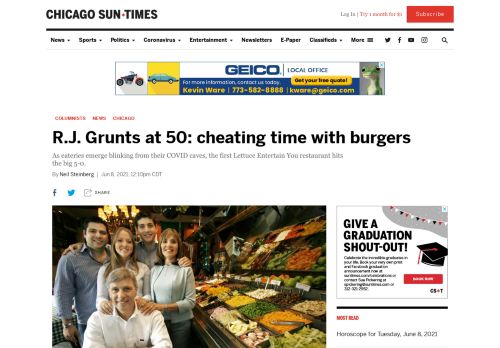 This article has been aggregated from chicago.suntimes.com and they maybe/are the copyright owners of the same. If you are the Author/Copyright owner of this article and want us to remove the same then send an email to admin@blog.restaurant so that we can delete it immediately. We sincerely regret and apologies for any inconvenience caused to you due to the same. Though it is your decision but please take note that the link to your website and the article have been given above, within and on the bottom of the article.