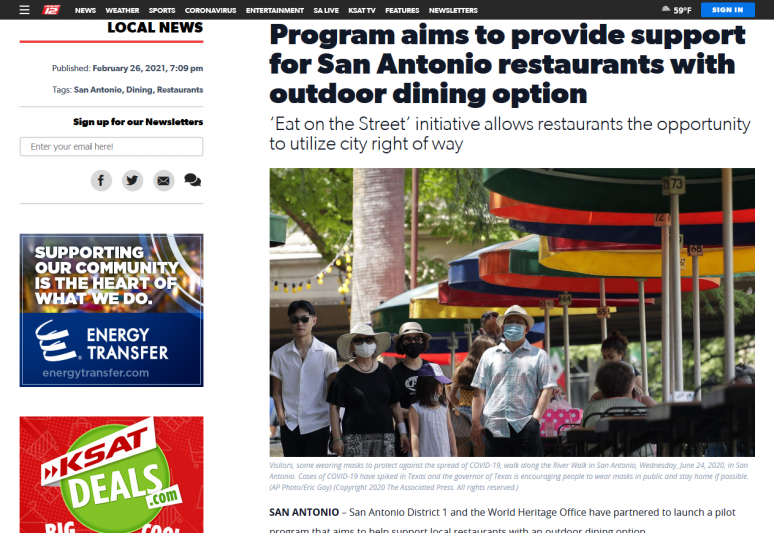 SAN ANTONIO – San Antonio District 1 and the World Heritage Office have partnered to launch a pilot program that aims to help support local restaurants with an outdoor dining option.

According to a release from the city, District 1 Councilman Roberto C. Treviño worked with the city of San Antonio World Heritage Office and Public Works since last fall to launch the “Eat on the Street” pilot program with District 1 partner restaurants.

Conversations began between local restaurant owners and the District 1 Office late last summer to explore ways to support the food and beverage industry because of the COVID-19 pandemic. City officials said the “Eat on the Street” initiative will allow restaurants the opportunity to utilize city right of way, such as the street or sidewalk in front of its business, to provide socially-distanced seating for dining customers.

The outdoor option was “developed to provide restaurants an option that supports them during a time when they have been heavily impacted by the economic effects of this pandemic,” according to the release.

“This initiative will help businesses offer a safe area for customers to visit, supporting their favorite local restaurants,” Treviño said in a released statement. “The food and beverage community has been struggling to remain open since the pandemic began. Employees and owners alike are looking for assistance during this time. This innovative program is one we plan to expand citywide, so other businesses can take advantage of additional outdoor seating opportunities, along with our great spring weather.”

City officials said San Antonio was designated a UNESCO Creative City of Gastronomy in 2017, making it only the second city in the United States to earn this designation and one of 36 cities worldwide.

“The designation officially recognizes the unique culinary heritage and traditions that exist in San Antonio,” the release said. “The World Heritage Office manages the designation and is in the process of seeking community feedback to define its UNESCO Creative City of Gastronomy Action Plan for the next four years.”

City officials said the outdoor dining expansion is a pilot program and intended to allow the independent and locally-owned food and beverage businesses to expand its exterior dining spaces for a trial period of up to 180 days.

Only $5,000 in “seed funds” is currently available for each council district, but city officials said that over time, if the pilots prove successful and more funds become available, the program can be replicated on a case-by-case basis in additional areas.

“The city of San Antonio, as a UNESCO Creative City of Gastronomy, remains committed to the sustainability of our local food and beverage industry. This has been a team effort involving multiple city departments, City Council and the private sector working together to develop and implement this pilot program,” Colleen Swain, director of the World Heritage Office, said in a released statement. “It is envisioned that this initial pilot will assist with social distancing, while increasing the number of customers served and allowing dine in operations to become more economically viable.”

Treviño joined a celebration on Thursday of the opening of one of the city’s newest restaurants, Golden Wat Noodle House, at 111 Kings Court, which also unveiled recent improvements to its building to offer expanded outdoor dining space as part of the pilot program.

“The patio street project is a Godsend,” said Susan Sypesteyn, owner of Golden Wat Noodle House and NOLA Brunch & Beignets. “It will allow us to serve customers in a safe outdoor environment as well as fill seats and add potential revenue, where we wouldn’t be able to at limited capacity.”

“By expanding our outdoor seating area, we’ll be able to safely invite a bigger number of our customers to join us ... which really helps our business,” said Chris Cullum, owner of Cullum’s Attagirl. “It also gives devoted regulars and new patrons alike a way to enjoy the connectivity our little chicken joint is known for. We’re grateful to be doing business in a city that works to preserve the character of neighborhoods like ours.” 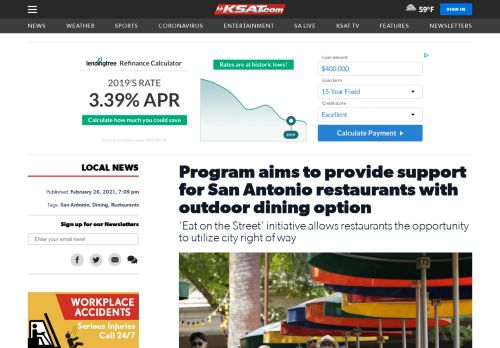 This article has been aggregated from www.ksat.com and they maybe/are the copyright owners of the same. If you are the Author/Copyright owner of this article and want us to remove the same then send an email to admin@blog.restaurant so that we can delete it immediately. We sincerely regret and apologies for any inconvenience caused to you due to the same. Though it is your decision but please take note that the link to your website and the article have been given above, within and on the bottom of the article.