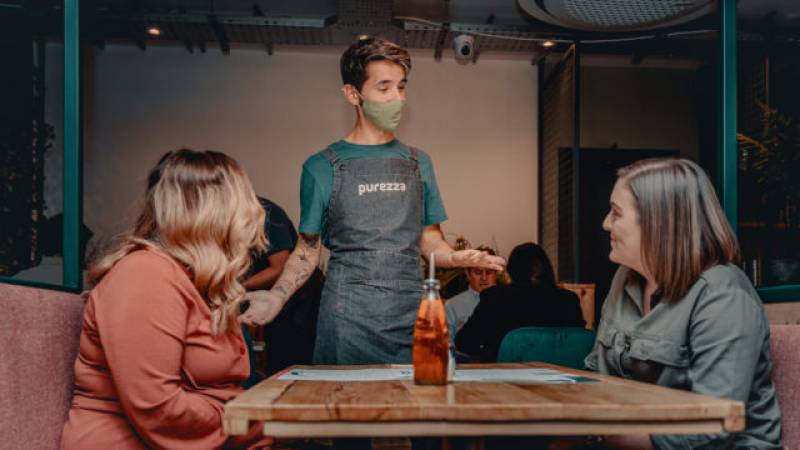 Purezza, the UK’s first vegan pizzeria, is launching its Manchester branch this summer, following successful openings in Bristol, Brixton, and Hove over the last year.

The Manchester branch will be the brand’s sixth site and takes over the former Dough Kitchen site on High Street in the Northern Quarter. It is expected to create around 20 jobs for the city, from chefs and servers to a general manager.

Purezza was founded by husband and wife team, Tim Barclay and Stefania Evangelisti, who were inspired by the lack of vegan Italian options on UK menus.

The pizzas are renowned globally, having won National Pizza of the Year in 2018 and received awards at the World Pizza Championships in 2019. Purezza is a 100% plant-based and vegan restaurant, for which it holds further accolades including Vegan Restaurant of the Year 2020.

Purezza’s range of creative Neapolitan-style pizzas features its own patented plant-based mozzarella – the recipe is a closely guarded secret but is made using plants, is hypoallergenic, and tastes, looks and melts just like the real thing. The bases are made from a unique wholegrain sourdough and each organic topping and ingredient is ethically sourced and carefully selected. The restaurant also serves a full gluten-free menu, including pizzas which are indistinguishable from regular sourdough.

As well as classics such as the Margherita, the menu features unique pizzas like the Parmigiana Party (National Pizza of the Year 2018), which uses aubergine parmigiana and vegan sausages, The One with N’duja, featuring a unique plant-based take on the Italian spicy topping, and a fully plant-based black truffle pizza with smoked tofu and wild mushrooms.

Sides, salads and desserts are on the menu too, with salads such as the Pure Bowl - organic spiced lentils and buckwheat tossed with kale, peppers and semi-dried tomatoes, topped with pesto courgetti spaghetti, crunchy corn, marinated olives, parmesan cheese, and a balsamic glaze.

For dessert there’s The Chocolate One, which uses Purezza’s signature fluffy sourdough coated in a homemade chocolate-hazelnut sauce and topped with white chocolate crumble and ice cream.

In addition, the menu features a range of creative cocktails and organic beers and wines. Food will also be available via local delivery services.

Sustainability is at the forefront of Purezza’s values, and this comes across in more than just the food. The restaurant is fitted out with reclaimed and upcycled furniture, and decoration has been completed with eco-friendly and organic paints.

Tim Barclay, co-founder and co-owner of Purezza, says: “Manchester has been on our agenda for years now as we know it has a vibrant foodie scene, which will only grow once lockdown restrictions are lifted. We’ve had more requests on social media to open in Manchester than any other city in the UK, and it’s truly a pleasure to honour those requests and to finally make it happen. We’re really excited about this, and we can’t wait to welcome Manchester pizza fans through our doors.”

Check out the menu and opening times on the website.

Purezza’s Manchester branch is scheduled to open in summer 2021.

Add a link to your business 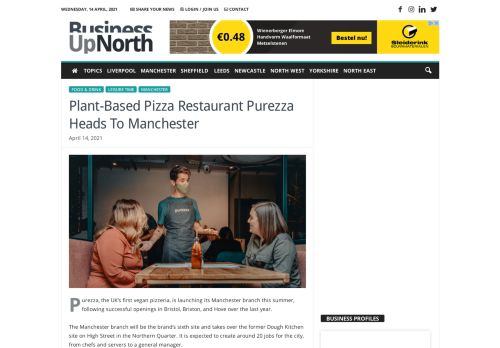 This article has been aggregated from businessupnorth.co.uk and they maybe/are the copyright owners of the same. If you are the Author/Copyright owner of this article and want us to remove the same then send an email to admin@blog.restaurant so that we can delete it immediately. We sincerely regret and apologies for any inconvenience caused to you due to the same. Though it is your decision but please take note that the link to your website and the article have been given above, within and on the bottom of the article.