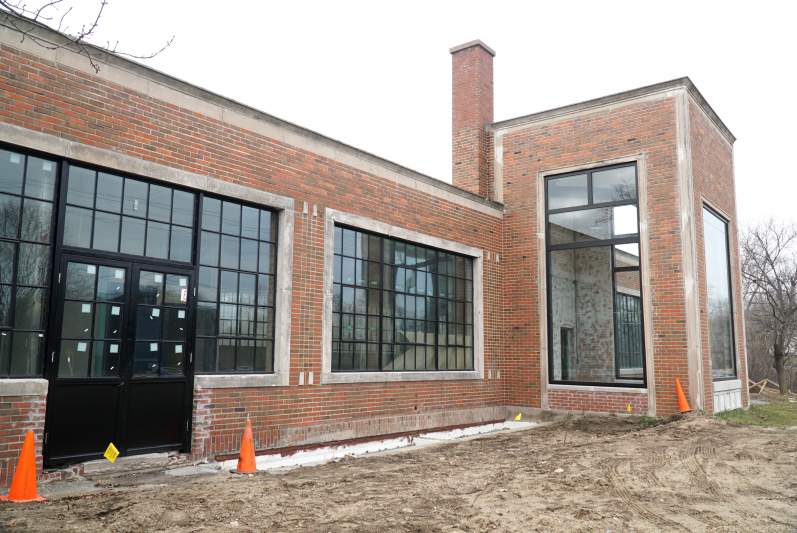 Changes are coming to the original plans for redeveloping a historic mill in Hines Park.

Originally, the Phoenix Mill at 14973 Northville Road in Plymouth Township was to house both a banquet center and a restaurant after its restoration is complete. But changes in the landscape due to the COVID-19 pandemic prompted the mill's new owners to change some of those plans.

The banquet center will remain, but the planned restaurant will not go forward, said Greg Donofrio with Critical Mass, the company which purchased the mill. Instead of the restaurant on the upper level, that space will be leased for professional offices for a landscape architecture firm.

"Unfortunately with COVID, the restaurant tenant pulled out so we had to build that space upstairs," Donofrio said.

Donofrio said some space will remain available upstairs, including a small area that could be used by the company running the banquet area. That could allow for visitors to see the building both on the lower level and upper level.

"The banquet tenant has expressed interest in taking that space as well," he said. "You would still be able to experience the upstairs space if you're a (banquet) guest as well."

The revisions to the plans for the structure were reviewed by the Plymouth Township Planning Commission during its May 19 meeting at Plymouth Township Hall. The planning commission looked at the plans last summer when the restaurant was still part of the plans, which caused some issues around available parking at the site. With the changes to the building's use now, parking should not be an issue, Donofrio said at the meeting.

"With the change, it resolved the parking issue, which was the biggest issue when we presented this the last time," he said. "So we have adequate parking onsite now."

He said part of the plans include adding more greenery to the area and removing paved areas, as well as adding more trees and grass. The land around the mill will be open to the public to explore.

"We're removing 38,000 square feet of asphalt and converting it into greenspace," Donofrio said. "No trees are going to be removed."

Some questions arose as a part of the changes, especially in relation to the sale from Wayne County. Chairman Dennis Cebulski asked if the new plans needed the county's blessing to move forward with it, since there were specific requirements to keep the property accessible to the public as a condition of the sale.

"When the building was purchased from Wayne County they did want it tied in some way to the park, and I did see the site plan you're having sort of a little service station approach for bicycles," he said. "Did you have to receive approval from Wayne County to have the landscape firm there?"

Donofrio said he received approval from the county after informing them of the change of plans. He said even with the change, the changes align with the requirements set forth by the county to reopen the space.

"We did let them know of the change-of-tenant, specifically, however, it doesn't change one of the key features of the site which is being open. This for 70 years was fenced off as a county building. You couldn't walk on the property," he said. "So when we take the fence down, then that means that everybody can walk onto the property whether you're visiting a business within the building or not to enjoy the park space."

The deals for the mills include language that requires the new ownership to inform the county if they plan to sell it in the future, as well as pursue historic designation for the sites. Donofrio said he plans on pursuing placing a state historic marker at the mill.

Phoenix Mill, along with the Wilcox Mill in Plymouth and the Newburgh Mill in Livonia, are planned to be revamped and renovated into usable spaces after being used by Wayne County mostly as storage spaces the last several decades. Developer Richard Cox is involved in all three projects: he acquired the Phoenix Mill first and is in the process of acquiring the Wilcox and Newburgh Mills from Wayne County after delays due to the pandemic. The Wayne County Commission approved the sale of the Wilcox Mill to Cox during its May 20 meeting.

The banquet center will continue as previously planned, which includes a warming kitchen and prep tables. No cooking will take place on site, Donofrio said.

The planning commission voted to approve the changes to the site plan. The site could open as early as July, Donofrio said.

This article has been aggregated from www.hometownlife.com and they maybe/are the copyright owners of the same. If you are the Author/Copyright owner of this article and want us to remove the same then send an email to admin@blog.restaurant so that we can delete it immediately. We sincerely regret and apologies for any inconvenience caused to you due to the same. Though it is your decision but please take note that the link to your website and the article have been given above, within and on the bottom of the article.