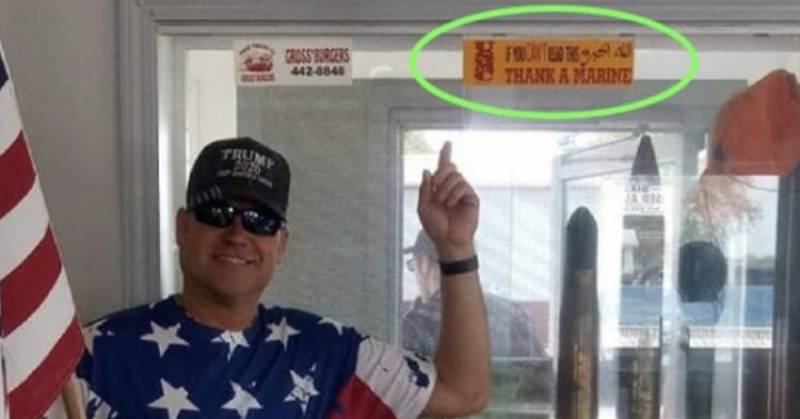 There’s a restaurant in Danville called Gross’s Burgers that refuses to step back from its patriotic display. Although the restaurant owner posted a bumper sticker that some of his customers found offensive, he refused to take it down – preferring to lose their business than compromise on declaring his love for all things USA. Now, the image of the restaurant’s bumper sticker has gone viral, and people from across the world, not just Gross’s customers, are declaring that it racist after all. 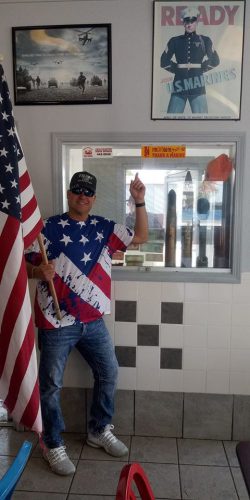 The sign promotes the idea that Marines helped stop Americans from becoming associated with Arabic. The sign says:

“If you can’t read this, thank a Marine.” The additional text next to the first part of the message is written in Arabic and says, “Allahu Akbar,” which translates to “God is most great” in English.

Brad Gross considers his bumper sticker to be just one of the many “patriotic” items in his collection. Because he loves America and has been using his restaurant to promote the American cause since it was established ten years ago, he refuses to take it down. He also received the bumper sticker from a Marine who risked his life fighting in Iraq, so he feels justified in putting up the sign that his customers consider racist.

The customer who exposed Brad Gross for his racist sign was Sam Schnelle. She posted the image and quickly got more than 800 people to agree with her caption: “f— Grossburgers. Absolutely disgusting.”

Schnelle called the restaurant to ask if they could remove the offensive sticker. She did not get the answer she had been expected.

“They then handed the phone to the manager who said, we are most certainly not taking it down. YOU PEOPLE are too sensitive nowadays. And then proceeded to argue with whatever recommendations/points I made and then hung up on me,” she said, “Nice.”

While Gross has had to deal with people complaining about his views for years, he said that because he was a Marine himself and received the bumper sticker from a Marine who served in Iraq, he felt privileged to put the sign up in his store. He also makes an effort to employ Marines when he can.

“I can’t thank them enough,” he added about the Marines in the military and the people who defended his establishment from the numerous complaints.

People are not happy about Gross’s decision to keep the sign up. One person wrote on Schnelle’s Facebook post, “Why are all these Americans cheering for ignorance? The ability to speak more than one language should be applauded. Pathetic.”

Do you think this restaurant owner should take down the bumper sticker? Or should he ignore his haters and keep it up?

Every time you share an AWM story, you help build a home for a disabled veteran. 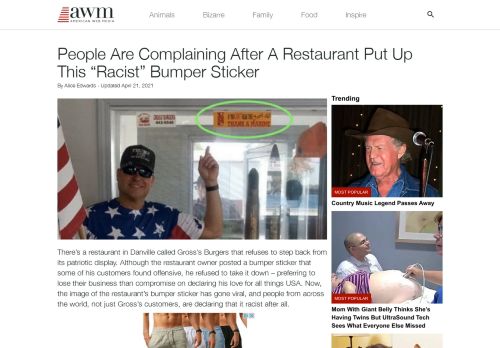 This article has been aggregated from awm.com and they maybe/are the copyright owners of the same. If you are the Author/Copyright owner of this article and want us to remove the same then send an email to admin@blog.restaurant so that we can delete it immediately. We sincerely regret and apologies for any inconvenience caused to you due to the same. Though it is your decision but please take note that the link to your website and the article have been given above, within and on the bottom of the article.