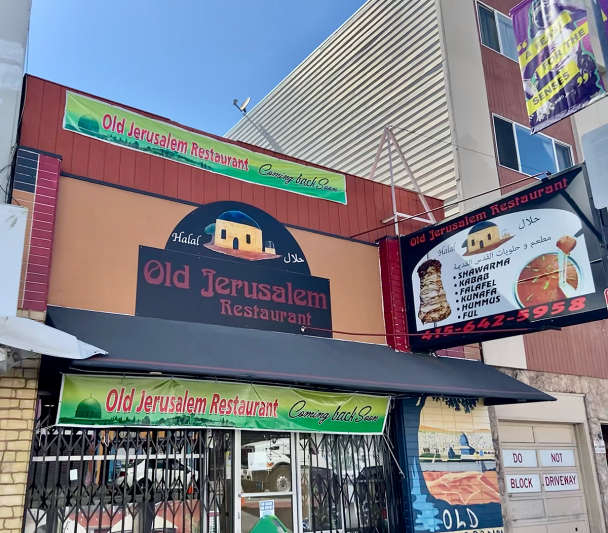 Old Jerusalem, the Palestinian restaurant on Mission Street near 26th Street will reopen on June 15 after closing nearly a year ago, when water from firefighters extinguishing a blaze on the roof damaged the ceiling and walls of the restaurant.

The July 3, 2020, fire, which was started by fireworks set off by unknown individuals, did not damage the restaurant. But the insurance process for repairs dragged on, delaying the reopening.

“Our customers were eager, and have been contacting us to see when we will reopen,” said Hajem Almukdad, one of Old Jerusalem’s two owners.

One person who seemed eager was walking down Mission Street on Tuesday afternoon as he paused in front of the restaurant to peek inside and check to see if the doors were locked. They were. But when told Old Jerusalem would open next Tuesday, he seemed at ease. “They have great lentil soup,” the passerby said.

Old Jerusalem serves Palestinian food such as hummus, falafel, and shawarma, and also has rare recipes such as Musakhan, a dish of sumac chicken and caramelized onions served with taboon bread. The meat is all Halal, and every table is served pickled beets, olives, and two homemade sauces, one with parsley and tahini, and the other with onion, hot sauce, and tomato.

“Everything we have on the menu is made from scratch,” says Almukdad.

Old Jerusalem was opened in 2005 by Ahmed Nasser, who was unable to find tasty Middle Eastern food in San Francisco and decided to open his own restaurant. “He wanted to open something that when you go, you feel like you’re back home,” said Almukdad, his business partner.

And the food seems to do a good job of transporting people. In fact, it does it so well that people often come from San Jose or Sacramento for things such as Kunafah, a treat made from shredded wheat and sweet cheese.

Old Jerusalem makes its Kunafah from scratch, using a machine specific to this dessert imported from “back home.” A few times, Almukdad has mailed the Kunafah to people in Los Angeles and Chicago who cannot find homemade versions of the dessert easily in the United States.

Over the years, Almukdad said, customers have enjoyed the hummus made in-house from dried garbanzo beans and Al Kanater tahini, sourced from Lebanon.

Almukdad says the politics of Israel and Palestine are second to the great food. “Seventy percent of our customers are Jewish,” Almukdad said. And he says that, despite a mural on the wall of Al-Aqsa Mosque, the third holiest site in Islam, which is located in Jerusalem, they are “very careful not to talk politics, as we cannot mix business with politics.”

And, now Almukdad is thrilled to be back in business: “I can’t wait” for Tuesday.

The restaurant will be open every day from 11 a.m. until 10 p.m., for both indoor dining and dining on the outdoor patio. It is located at 2966 Mission St. near 26th.

This article has been aggregated from missionlocal.org and they maybe/are the copyright owners of the same. If you are the Author/Copyright owner of this article and want us to remove the same then send an email to admin@blog.restaurant so that we can delete it immediately. We sincerely regret and apologies for any inconvenience caused to you due to the same. Though it is your decision but please take note that the link to your website and the article have been given above, within and on the bottom of the article.