Bengaluru, Nov 4 (PTI) A non-bailable warrant has been issued against the directors of the Coffee Day Global Limited which manages the famed Cafe Coffee Day in a cheque... 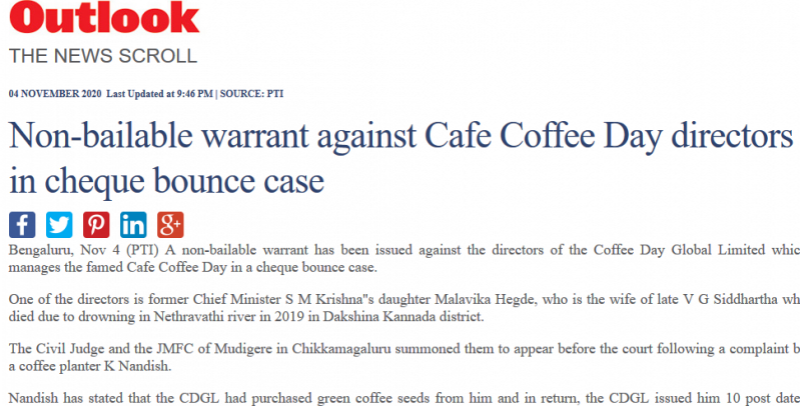 Bengaluru, Nov 4 (PTI) A non-bailable warrant has been issued against the directors of the Coffee Day Global Limited which manages the famed Cafe Coffee Day in a cheque bounce case.

One of the directors is former Chief Minister S M Krishna''s daughter Malavika Hegde, who is the wife of late V G Siddhartha who died due to drowning in Nethravathi river in 2019 in Dakshina Kannada district.

The Civil Judge and the JMFC of Mudigere in Chikkamagaluru summoned them to appear before the court following a complaint by a coffee planter K Nandish.

Nandish has stated that the CDGL had purchased green coffee seeds from him and in return, the CDGL issued him 10 post dated cheques totalling Rs 45,38,554 of Canara Bank in Chikkamagaluru branch.

When he deposited in the Axis Bank where he has the account, the cheques were dishonoured as there were insufficient funds,according to the complaint.

"The first date of appearance was October 6.Since they failed to appear before the magistrate on the said date in spite of serving of the summons, the court has issued a non-bailable warrant," Nandish''s lawyer, Halekote A Thejawi told PTI.

He added that the matter has been posted to November 11 and they have to appear before the court and get the warrant recalled.

Talking to reporters on Wednesday, Nandish said he had been supplying coffee seeds to Siddhartha''s company ABC for many years.

When Siddhartha was alive, he used to issue deferred cheques with an interest of 10 to 12 per cent, Nandish said.

"Due to death, all our payments were held up but later the people in the organisation assured us that they will honour their cheques and our money will not go anywhere," he said.

They said they would completely clear the dues by November, he alleged.

In this regard, a Coffee Day spokesperson said "We had outstanding payments to 1,020 Coffee planters of Chikkamagaluru and Hassan one year back.We have fully paid back 700 plus planters in the last 11 months." "We have also made part payments to the remaining planters.The group''s fund raising plans were hampered by the COVID-19 pandemic and hence the delay in completing the payments.

But we remain committed to meeting all our obligations," he added. PTI GMS BN WELCOME BN WELCOME 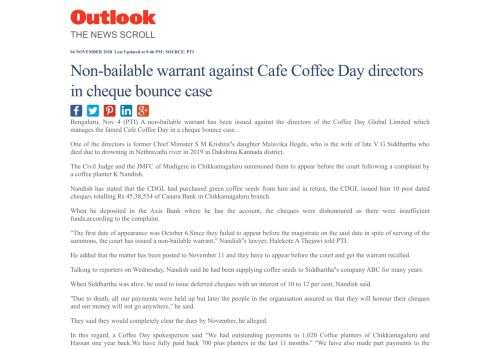 This article has been aggregated from www.outlookindia.com and they maybe/are the copyright owners of the same. If you are the Author/Copyright owner of this article and want us to remove the same then send an email to admin@blog.restaurant so that we can delete it immediately. We sincerely regret and apologies for any inconvenience caused to you due to the same. Though it is your decision but please take note that the link to your website and the article have been given above, within and on the bottom of the article.