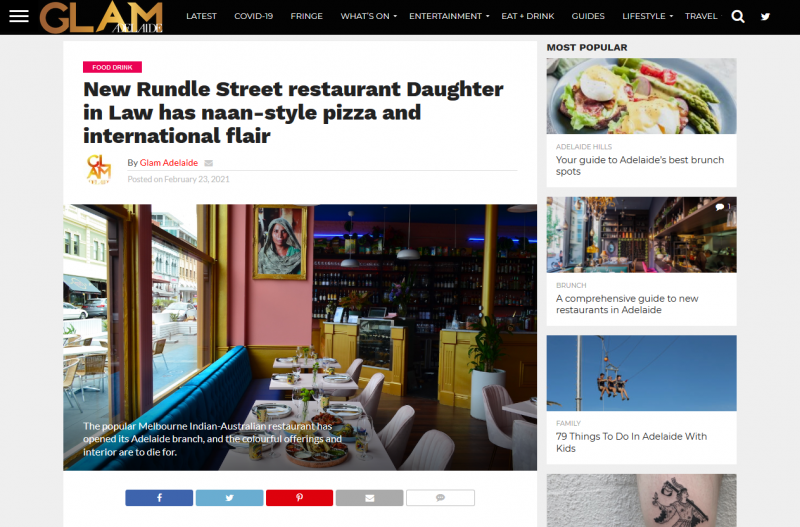 His newest venture, Daughter In Law, will draw from Singh’s experience in Melbourne and abroad, delivering a no-frills Australian-Indian bar and grill within a bright, buzzing dining space. The “ever-changing, rule-breaking” menu at Rundle Street’s Daughter In Law will feature dishes such as naan-style pizza, street-style oysters and Padadi Chaat, and dishes from the tandoori including lamb chops, tandoori chicken and jumbo prawns. “The menu draws on what our patrons love to eat, and it is fun and tasty,” Singh says.

“Indian food belongs to the world; Curry is an international cuisine, and the only true authentic Indian food is what mum or grandma would cook,” he says. In addition to his mum and grandma, Singh gets restaurant inspiration from various family members, and their portraits will even be hung on the walls. Staying true to its title, Daughter In Law is inspired by women in Singh’s family, and the restaurant––from cellar to cigar bar to beer garden––was conceptualised by his former wife, Jennifer.

“The focus comes from the women in my family [because] these women respect tradition but are not afraid to break it and push the barriers,” Singh says.

“They are trail blazers, and that is exactly the ethos of my restaurants.”

In terms of drinks, Daughter In Law will have self-serve beer and wine fridges, and flavourful mock and cocktails with “flavours from east to west.” Expect pours that pack a punch, such as beetroot juice with mezcal, spicy jalapeño margarita and an alcoholic take on the classic mango lassi.

Curated by sommelier Dheeraj Bhatia, the drinks list at Daughter In Law offer over 200 wines and 200 beers, many of them South Australian.

“I am a huge fan of South Australian wines, and they pair so perfectly with Indian food,” Singh says. Although Singh has been instrumental in the set up and will continue to be involved, the day-to-day operations will be handled by South Australian hospitality heavy weights, such as Bhatia alongside Amar Singh, who has moved to Adelaide as its head chef. Both men are also partners in the business.

“We are excited to create much needed jobs in hospitality, especially after the past year,” he says.

“I am confident Daughter In Law will only be one of multiple restaurants we open here in Adelaide.” This article has been aggregated from glamadelaide.com.au and they maybe/are the copyright owners of the same. If you are the Author/Copyright owner of this article and want us to remove the same then send an email to admin@blog.restaurant so that we can delete it immediately. We sincerely regret and apologies for any inconvenience caused to you due to the same. Though it is your decision but please take note that the link to your website and the article have been given above, within and on the bottom of the article.