Mexican Bakery La Calavera Is Returning to Kirkwood as a Pizzeria

Mexican Bakery La Calavera Is Returning to Kirkwood as a Pizzeria 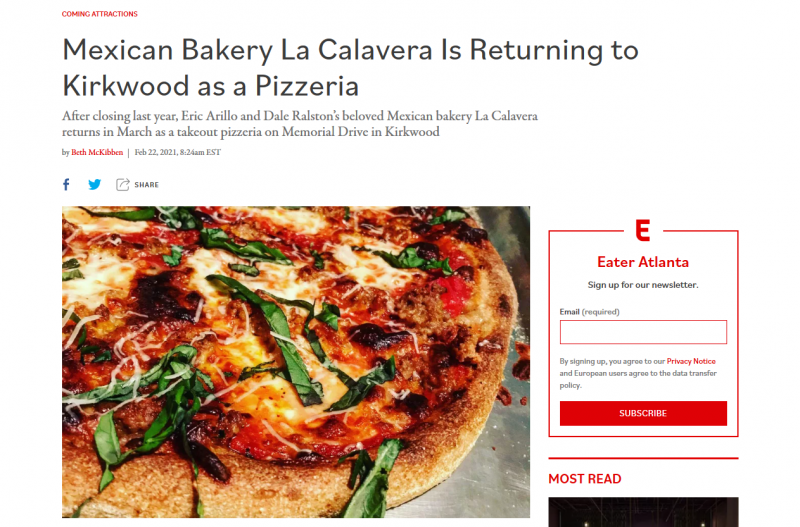 After closing last January, Eric Arillo and Dale Ralston’s beloved Mexican bakery returns in March as a takeout pizzeria at its former Memorial Drive address in Kirkwood. First reported by Decaturish, the couple made the announcement on Facebook and rebranded the bakery to La Calavera Pizza.

Arillo and Ralston relocated the bakery to Memorial Drive from East College Avenue in September 2019, where it had been since 2014, citing low foot traffic in Decatur. The decision to close La Calavera on Memorial Drive came down to lack of professional assistance in the kitchen and the inability to sustain production at the capacity necessary to successfully operate. At the time of the closure, Arillo was the lone baker for La Calavera, known for Mexican sweet breads like conchas and marranitos (pig-shaped ginger cookies) and its sprouted and long-fermented super sourdough breads.

As for their latest endeavor, Ralston tells Eater the current plan is to operate as a takeout restaurant serving sourdough pizzas, with limited delivery to the area around La Calavera. The couple also hope to offer dine-in service in the future.

In addition to pizzas like pepperoni and cheese and vegan pies, La Calavera will also offer gluten-free pizzas. When asked whether the bakery’s popular super sourdough and Mexican sweet breads will make occasional appearances on the menu, Ralston says they are “not sure yet” as she and Arillo are still in the decision-making process.

La Calavera began popping up at local farmers markets nearly a decade ago, before opening the Decatur location in 2014. Arillo, who was born in Huecorio in central Mexico but grew up in Atlanta, was first inspired to bake by watching his mother as a child. After working in restaurants around Atlanta throughout his teens, Arillo returned to Mexico to enter a culinary program and began baking professionally.

The couple named the bakery La Calavera (the skull) after one of Mexico’s most significant holidays: Dia de los Muertos (Day of the Dead). Sweet breads such as pan de muerto topped with dough-shaped bones play a vital role in the celebrations. 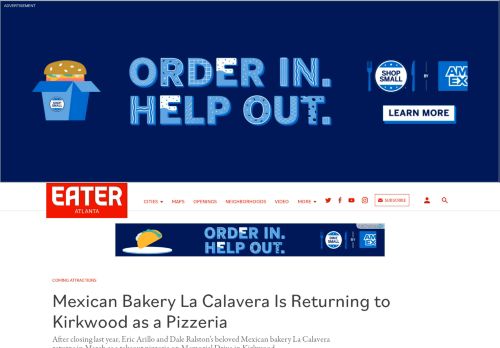