McDonald's will require anti-harassment training at all restaurants in 2022

McDonald's will require anti-harassment training at all restaurants in 2022

McDonald's will require sexual harassment training at all of its 39,000 restaurants around the world, including franchisee locations, beginning January 2022, the company told The Associated Press Wednesday. The training will impact 2 million employees.

Restaurants must also gather feedback from employees and managers about the location's work environment and share the results with workers. Corporate evaluations will also gauge whether employees feel physically and emotionally safe at work, CEO Chris Kempczinski told the AP.

This appears to be the first time that McDonald's has required its franchisees to offer sexual harassment training. Operators will, however, be allowed to choose their own training programs, though McDonald's has made anti-harassment materials available for its franchisees. This move comes after Kempczinski asked a team of executives in March to review company workplace safety policies and create a new standard.

McDonald's has been mired in an ever-growing tangle of sexual harassment complaints over the past few years. Even after Kempczinski took the helm of the chain in 2019 — promising a clean slate and improved culture for the restaurant giant after former CEO Steve Easterbrook was fired for sexual misconduct — accusations of store-level assault continued to surface. In March, for example, a CBS Sunday Morning TV segment detailed several new sexual harassment allegations at McDonald's restaurants.

It's challenging to ensure ethical compliance across a store network as massive as McDonald's, but requiring franchisees to train their employees on anti-sexual harassment tactics could kickstart real progress in curbing the company's highly publicized safety and culture issues. Ninety-three percent of McDonald's restaurants worldwide are franchised.

In the past, McDonald's only required sexual harassment trainings of corporate-owned locations — just a sliver of its store footprint — though it encouraged operators to do the same and made training materials available on its website. The company also in 2019 created a four-page policy against "discrimination, harassment and retaliation" that provides guidance on next steps if a policy were violated and created a sexual harassment hotline.

Despite these efforts, critics have long called for putting McDonald's franchisees on the hook for these trainings alongside company-owned restaurants. Juliette Gust, co-founder of workplace misconduct reporting channel Ethics Suite, told Restaurant Dive last summer that restaurants aren't motivated to make these kinds of demands of their franchisees because corporations have been absolved of joint employer liability in these kinds of situations in the past.

"But, if any company has the power to effect some change, it would certainly be McDonald's," Gust said.

Kempczinski told the AP that training details are still being hashed out, but employees will likely receive training when they begin working at McDonald's, and that restaurants may also host annual trainings for all workers. This would mirror the level of training that is already carried out at McDonald's headquarters in Chicago.

"It's really important that we be very clear: a safe and respectful workplace where people feel like they're going to be protected is critically important for our business," Kempczinski told The AP. "It's just what society is expecting." 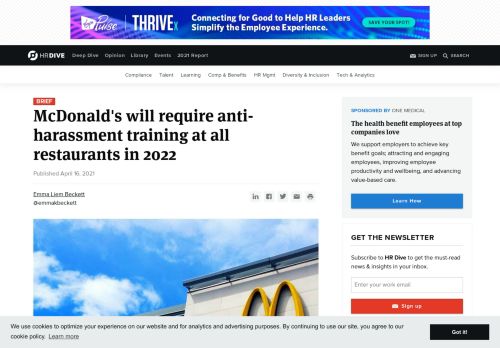 This article has been aggregated from www.hrdive.com and they maybe/are the copyright owners of the same. If you are the Author/Copyright owner of this article and want us to remove the same then send an email to admin@blog.restaurant so that we can delete it immediately. We sincerely regret and apologies for any inconvenience caused to you due to the same. Though it is your decision but please take note that the link to your website and the article have been given above, within and on the bottom of the article.