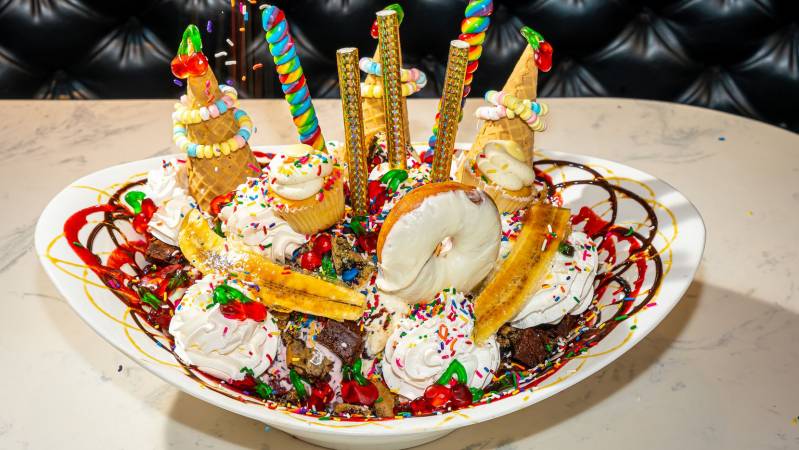 Sugar Factory American Brasserie, which originated in Las Vegas in 2009, is moving into the former Ruth’s Chris Steak House in Uptown Dallas. That’s right: Steakhouse, out. Candy, in.

The Campfire Spiked S'mores Milkshake at Sugar Factory costs $31 and is a stacked-high shake spiked with Virginia Black Whiskey. It'll be on the menu when the restaurant and retail store opens in Uptown Dallas in summer 2021.(Courtesy of Sugar Factory) 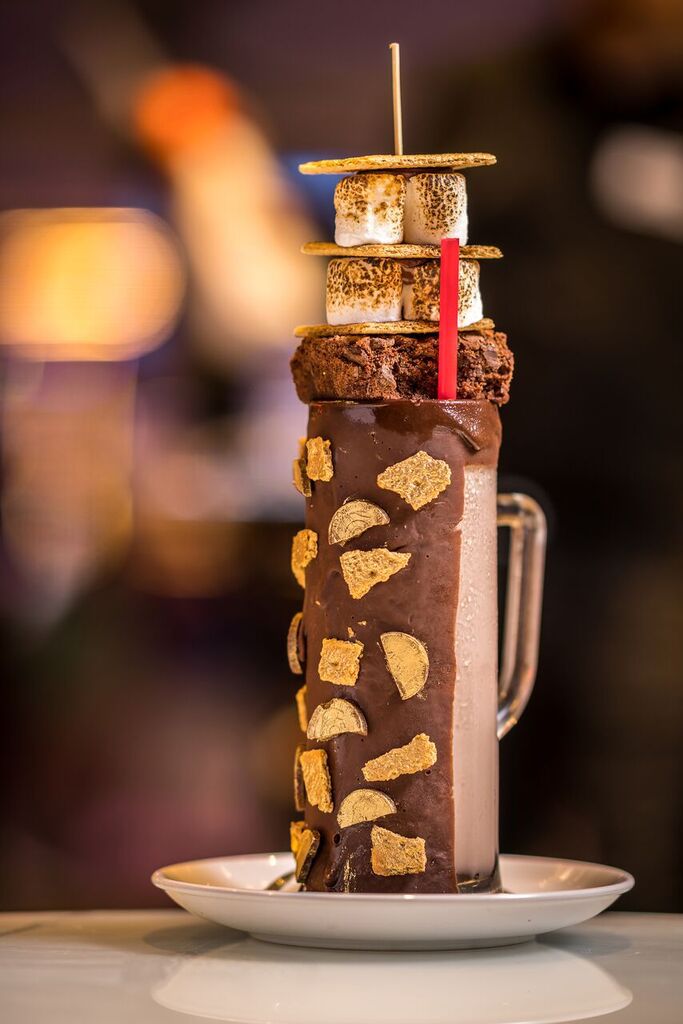 It’ll be the first Sugar Factory in Texas. And we don’t quite have anything like it. Sugar Factory is a retail dessert shop, as the name suggests, but it’s also a sit-down restaurant.

Celebrities like the Kardashian sisters, Drake and Mariah Carey have been photographed at Sugar Factory events.

A highly Instagrammable meal at Sugar Factory starts with brunch, lunch or dinner, with dishes like rainbow pancakes, a turkey club sandwich, a plate of pasta or a burger. But you probably shouldn’t leave a place called the Sugar Factory without dessert, should you? Dessert options include a fleet of “insane milkshakes” like the $19 Caramel Sugar Daddy Cheesecake milkshake or the $31 s’mores milkshake spiked with whiskey.

Customers can also order giant, shareable sundaes. Or, get dinner and dessert in one, with the Bacon Cheeseburger Milkshake: a strawberry ice cream shake topped with a mini cheeseburger, candied bacon strip, pretzels and M&Ms.

And sparklers, because this thing is fire.

Many of Sugar Factory's cocktails are served in a 64-ounce goblet. This watermelon cocktail costs $39. 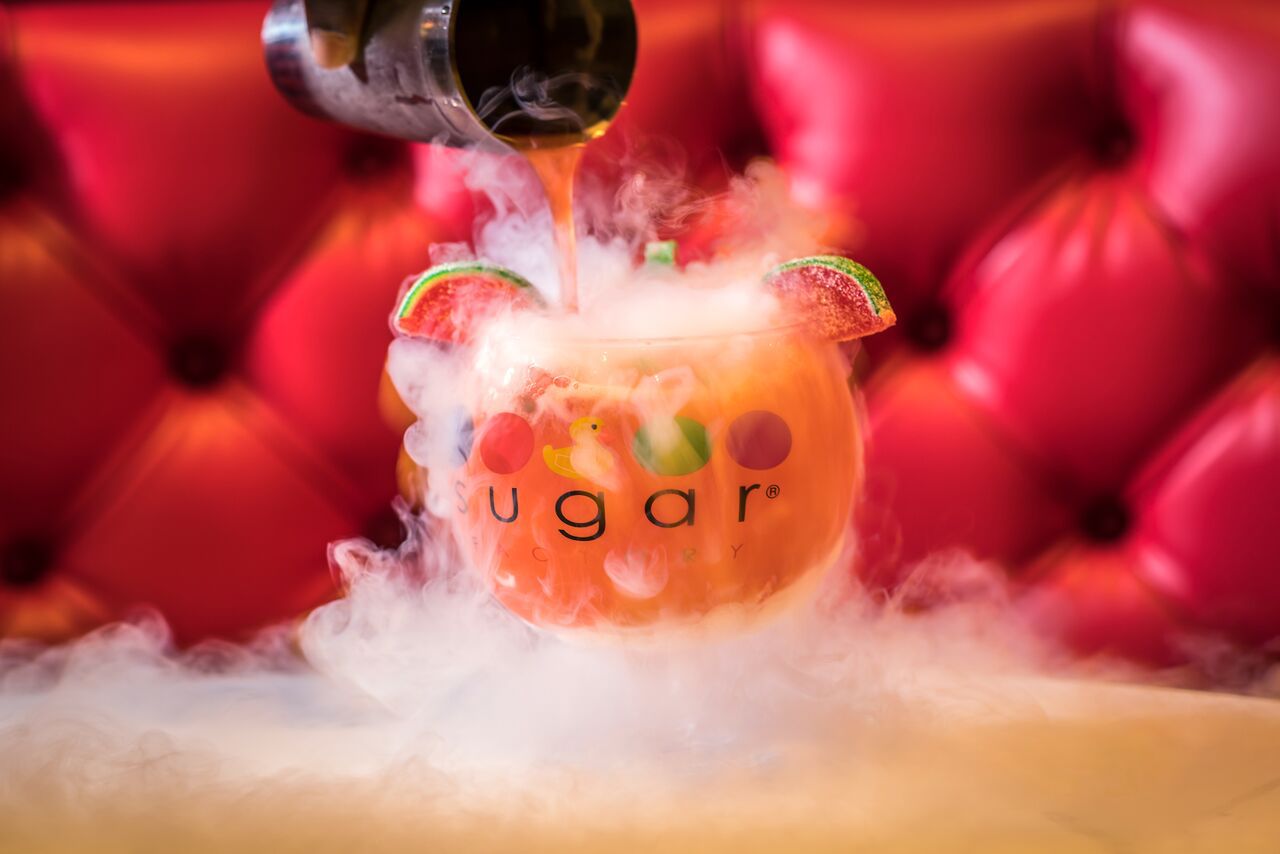 Cocktails are (or should be) the one-and-done variety, since they’re extra large in size and served in 64-ounce goblets. There are dozens of options, including the Electric Purple Jawbreaker Margarita, $39, made with edible purple glitter and blue raspberry gummy bears; the Lollipop Passion, $39, a tropical bev with suckers stuck in it; and the Magic Cotton Candy, $39, with whiskey, peach puree, sweet tea and Sour Patch peaches.

“We offer a sweet escape that the entire family can enjoy at any age,” says Larry Rudolph, partner at Sugar Factory.

This place is definitely a caloric splurge.

The Rainbow Sliders, an appetizer for $25 at Sugar Factory, are a colorful array of little cheeseburgers.

The Rainbow Sliders, an appetizer for $25 at Sugar Factory, are a colorful array of little cheeseburgers. (Courtesy of Sugar Factory)

The dining room — converted from its former life as a steakhouse with dark-colored walls and dim lighting — has neon lights, walls covered in faux flowers, and sparkly chandeliers. It’s actually not Sugar Factory’s first time converting a steakhouse into a candy shop; a coming-soon restaurant/retail shop will open in Florida, in place of a steakhouse called Grill on the Alley. 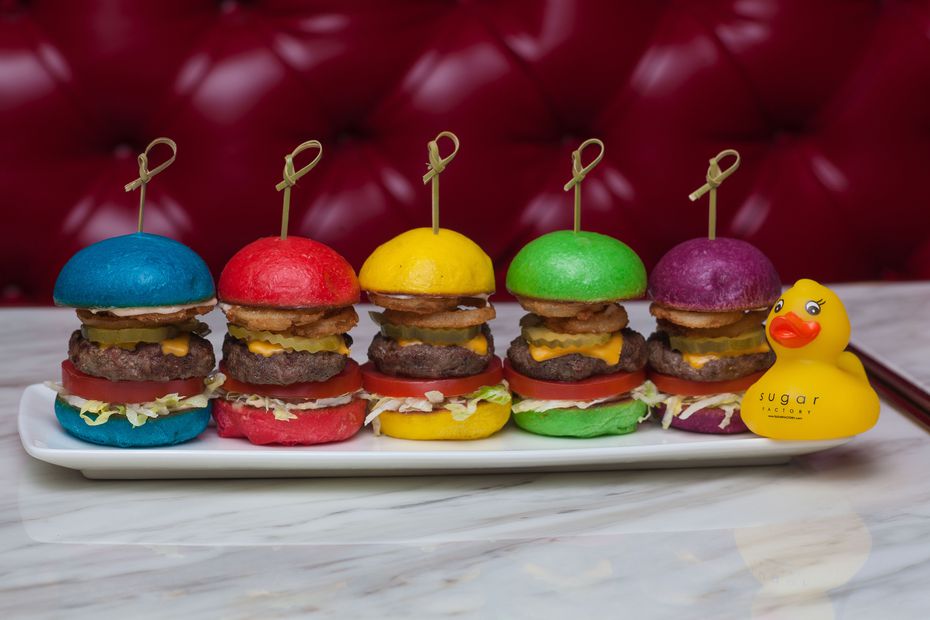 Dallas has had a wild run with over-the-top restaurants this year. Nusr-Et Steakhouse, the most expensive restaurant Dallas has ever seen, opened in March a few blocks away in downtown Dallas. And restaurants like Nick & Sam’s and the Rattlesnake Bar at the Ritz-Carlton have long been spots to see a celeb — and those are both in the same neighborhood as Sugar Factory.

It’ll fit right in, Rudolph says: “Dallas is a fun, cosmopolitan city that has the perfect blend of contemporary style with its cultural past. It attracts many new young families, emerging entrepreneurs, etc., and has a rapidly growing dining, music and arts scene that we want to be a part of. Sugar Factory will definitely fill a niche in the market that we think will be greatly welcomed once we arrive in the city.”

Sugar Factory currently operates about two-dozen restaurants, including three in Dubai and one in Abu Dhabi.

The new restaurant in Dallas is expected to open in summer 2021, says a spokeswoman.

Sugar Factory will be at 1900 Cedar Springs Road, Dallas.
For more food news, follow Sarah Blaskovich on Twitter at @sblaskovich. 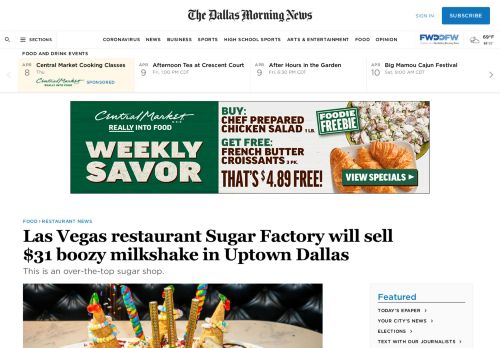