Yum Brands is on a mission to double the number of KFC restaurants in France over the next five years. Released on April 14, its latest spot, created by Havas Paris, focuses on the increasing importance of the drive-thru service during the pandemic.

“Crispy” is the first work produced by Havas Paris since it won the account in November, taking over from Sid Lee. The campaign will run across TV, social media and posters. Carat France oversaw media planning and buying.

The spot showcases brand ambassador Colonel Sanders preparing a bucket of chicken at home, with an original soundtrack produced by the agency’s production house HRCLS playing in the background. Colonel Sanders delivers the bucket to two youths waiting at the window.

The business aims to double to 600 KFC restaurants across France by 2026. KFC currently owns more than 23,000 restaurants in over 135 countries around the world.

A spokesperson for KFC told Adweek that the brand has seen strong growth in France over the last 30 years and maintains “a strong development ambition.” KFC’s 100% franchise model allows the company to open restaurants everywhere from city centers to suburban malls, the spokesperson added.

“France has a strong fine dining culture, but our growth is not contradictory with our tradition. Our brand takes into consideration French expectation and the wish to introduce more French products with animal welfare high standards,” the spokesperson said. “We are happy to share our fried chicken passion [with] many in France and hope to be more accessible in the next months and years.” 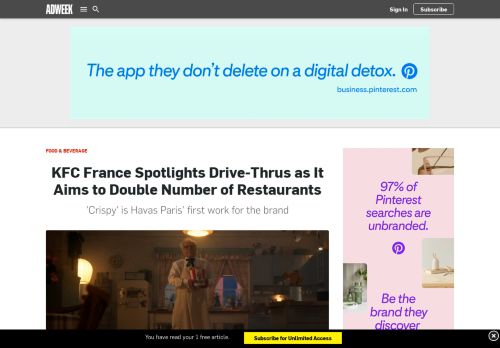 This article has been aggregated from www.adweek.com and they maybe/are the copyright owners of the same. If you are the Author/Copyright owner of this article and want us to remove the same then send an email to admin@blog.restaurant so that we can delete it immediately. We sincerely regret and apologies for any inconvenience caused to you due to the same. Though it is your decision but please take note that the link to your website and the article have been given above, within and on the bottom of the article.