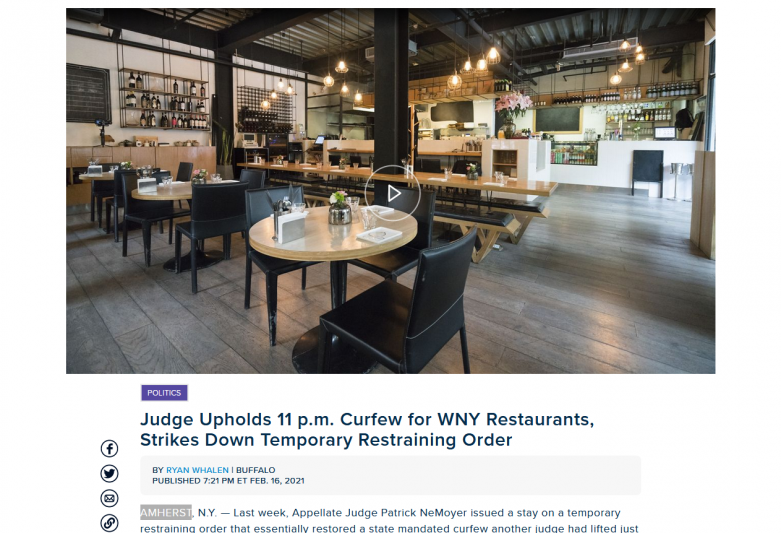 Late Tuesday afternoon, after hearing oral arguments, NeMoyer issued another ruling officially striking down the TRO. A representative for HoganWillig said it appeared clear the judge had written the ruling before the hearing.

The original lawsuit is also scheduled to be back before the original judge, state Supreme Court Justice Timothy Walker on March 15. Walker could issue a preliminary injunction voiding the curfew for those establishments again.

However, HoganWillig said NeMoyer's ruling asserted that since the state has changed the closing time from 10 p.m. to 11 p.m., the original suit is void. The firm said it is looking at its options but intends to be in front of Walker again.

Partner Corey Hogan said the change in the curfew's time is further evidence it is arbitrary.

"They're just guessing," Hogan said. "I think it's like a little bit of a bonus the governor gives out because all of his little kiddies behaved themselves. So then he allows everybody to have 11 o'clock with the idea being, I guess, if we continue to behave ourselves, they'll extend it beyond that but this isn't a game. These are people's livelihoods."

The petitioners could also appeal Nemoyer's decision in which case it would go before a panel of five judges. Neither the restaurant owners nor the press was given access to the hearing Tuesday.

Hogan said he doesn't agree with that kind of secrecy except under special circumstance where for instance security or negotiation are compromised.

"Once it's an argument in open court, in a courtroom and the judge is listening to arguments, I absolutely think the press, as well as the clients, should have access to that," Hogan said.

He reiterated every day counts right now for his clients. Hogan said he doesn't believe one of them is currently making a profit and some are on the verge of filing for bankruptcy. 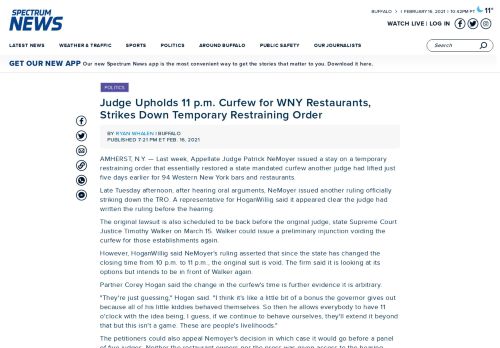 This article has been aggregated from spectrumlocalnews.com and they maybe/are the copyright owners of the same. If you are the Author/Copyright owner of this article and want us to remove the same then send an email to admin@blog.restaurant so that we can delete it immediately. We sincerely regret and apologies for any inconvenience caused to you due to the same. Though it is your decision but please take note that the link to your website and the article have been given above, within and on the bottom of the article.