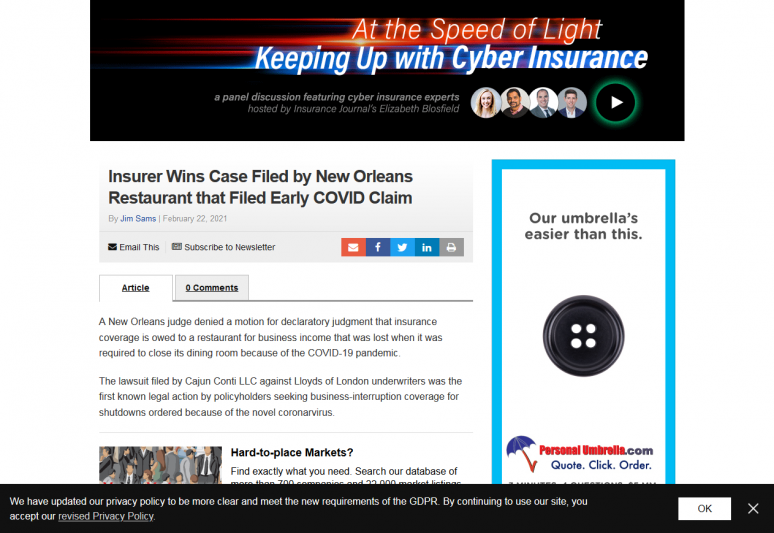 A New Orleans judge denied a motion for declaratory judgment that insurance coverage is owed to a restaurant for business income that was lost when it was required to close its dining room because of the COVID-19 pandemic.

The lawsuit filed by Cajun Conti LLC against Lloyds of London underwriters was the first known legal action by policyholders seeking business-interruption coverage for shutdowns ordered because of the novel coronarvirus.

“After months of hard fought litigation and a full trial on the merits, the court ruled correctly,” the insurer’s attorney, Allen C Miller with Phelps Dunbar in New Orleans, said in an email. He declined further comment.

Irons did not include a written opinion with her order denying Cajun Conti’s motion. She said only that the attorneys involved had submitted memoranda after a trial in December and she took those arguments under advisement.

Attorneys who represent insurers laid the groundwork to deny virus-related business-interruption claims early on. They argued that coverage is not triggered under commercial property policies without some tangible physical alternation to the insured property.

State and federal judges around the country have ruled in favor of insurers in motions to dismiss or for summary judgment in about four cases out of five so far.

Cajun Conti owned a French Quarter bistro called Oceana Grille. Attorney John Houghtaling II filed a motion seeking a declaratory judgment from the Orleans Parish court that coverage would be owed for any business interruption on March 16, even before it was known whether emergency orders by Gov. John Bel Edwards would impact the restaurant’s revenues.

Houghtaling pointed out that the restaurant’s owners paid extra to purchase an insurance policy that did not have an exclusion for damages caused by virus and bacteria, as most commercial property policies do.

The Gauthier Murphy & Houghtaling law firm refused to make any public comment about the ruling.

Rhonda D. Orin, an insurance recovery attorney for the Anderson Kill law firm in Washington, D.C., said the lack of a written opinion may give Cajun Conti a broader range of arguments on appeal, depending on local rules. She said judges sometimes make a tactical decision not to write their reasoning in their opinion in order to give the losing side more leeway with higher courts.

Although the ruling in Cajun Conti notches another victory for insurers, Orin said insurance recovery cases each come with their own sets of facts.

“This baseball counting — you’re up a run, you’re down a run — we’re not all playing the same game on the same field,” Orin said.

She said counting wins and losses in the lower courts might not yield an accurate prediction on how any individual case will ultimately be decided. Orin noted that on Jan. 28, a judge denied a motion by Philadelphia Indemnity Insurance Co. to dismiss a business-interruption action by Goodwill Industries of Orange County. Orange County Superior Court Judge Peter Wilson said in his ruling that decisions by federal courts that decided in favor of insurers were not binding in his court rooms because the facts were distinguishable.

“We have to wait and see what comes next,” Orin said. “I find it hard to believe that the only industry that is not going to be affected by this (pandemic) is the insurance industry.”

Sams is editor of ClaimsJournal.com, the online resource and daily newsletter for property/casualty insurance claims professionals. ClaimsJournal is a member of the Wells Media Group. Sams can be reached at jsams@wellsmedia.com More from Jim Sams

Was this article valuable?

Thank you! Please tell us what we can do to improve this article. 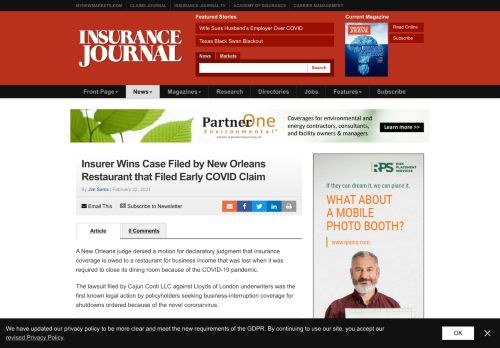 This article has been aggregated from www.insurancejournal.com and they maybe/are the copyright owners of the same. If you are the Author/Copyright owner of this article and want us to remove the same then send an email to admin@blog.restaurant so that we can delete it immediately. We sincerely regret and apologies for any inconvenience caused to you due to the same. Though it is your decision but please take note that the link to your website and the article have been given above, within and on the bottom of the article.