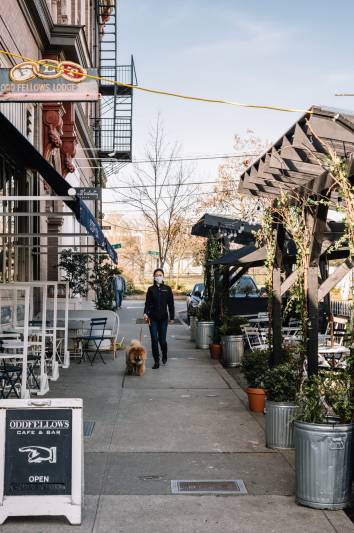 As Capitol Hill restaurants have stretched into the streets, many have also joined companies across the area to reach out for the federal PPP (Image: Oddfellows)

Oddfellows has watched one hell of a year unfold from its historic building at 10th and Pine. After a record 2019, the pandemic brought an abrupt shutdown in March followed by a takeout-only reopening in May. After the police killing of George Floyd, Seattle’s ensuing Black Lives Matter protests — and the rise and fall of CHOP– unfolded more or less outside the cafe’s door.

Blocks away, at Broadway and Union, Optimism Brewing Company saw sales plummet 75% during the first year of the pandemic, said co-founder Gay Gilmore. “The good news is that things are looking up,” she told CHS: February’s revenue was only about 60% lower than the year before. The company doesn’t anticipate breaking even again until the end of the year.

Both businesses credit their survival, or at least the bulk of it, to loans received through the federal government’s $953 billion Paycheck Protection Program (PPP), meant to help businesses and other organizations continue to pay their workers during the pandemic.

For Oddfellows, “It made all the difference in the world,” said Adam Szafranski, brand manager for the cafe’s parent company. “We would not have been able to stay open without it.”

Very Oddfellows LLC was approved for more than $1.1 million in total PPP loans over the past year, according to public data. “There were a few grants we applied for that were offered by the city and different organizations,” Szafranski said, “but the amounts were minimal compared to the PPP.”

Optimism Brewing LLC, meanwhile, was approved for two loans totaling about $418,000. “Even if you count the PPP Loans as income, we are still down by 40% over the last year,” Gilmore said in an email. “We continue to operate at a loss every month, but if it wasn’t for the PPP we wouldn’t be able to pay our staff and we would most likely be closed.”

All told, the federal government approved more than $284 million to businesses based in Capitol Hill or adjacent neighborhoods from April 2020 through the end of February 2021, according to a database of approved PPP loans published by ProPublica. That amount comprises more than 2,600 loans made across three zip codes—98102, 98112, and 98122—that encompass Capitol Hill and its surroundings, stretching from Eastlake to Mt. Baker.

Heavy Restaurant Group, which operates six area restaurants, including Barrio on Capitol Hill, was approved for more total PPP loan money than any other recipient, at more than $6.9 million between two loans. The company did not respond to a request for comment.

Among the sectors most heavily represented on the list were restaurants and bars, schools, and professional services such as architecture, design, and software programming. A few local property management companies also made the list.

Thanks to the ProPublica PPP database, here’s a roster of the top recipients in the Capitol Hill and Central District area and a look at some of the stories behind the loans.

It’s important to note that not all businesses based in the three ZIP codes overlying Capitol Hill and the nearby actually do business in the neighborhood. The largest single payment within those boundaries, for example, was a $4,546,500 loan to United States Seafoods, an Eastlake-based commercial fishing company that sources seafood off the Alaskan coast. The company received more than $6.5 million in total loans.

Likewise, not all companies that do business on the Hill are based within the three ZIP codes. Sea Creatures, a family of restaurants that includes Capitol Hill-area eateries Bateau, Bar Melusine, and General Porpoise, received a $2.8 million loan but is technically based in Wallingford (98103).

Yet other companies are based in or around Capitol Hill but do business in various locations. These include the businesses behind Rudy’s Barbershop, which was approved for more than $4.4 million in loans, Pagliacci Pizza (roughly $4.3 million), Caffe Vita ($2.2 million), and sandwich shop Homegrown ($2 million), among others. Glassybaby, which produces handmade glass votive holders, received nearly $3.6 million.

Many of the loan recipients are central to the Capitol Hill community, as well as Seattle more broadly. Elliott Bay Book Company, which moved to the Hill from Pioneer Square in 2010, received more than half a million dollars in PPP loan money. Owner Peter Aaron said the money “was instrumental in terms of providing cash flow to keep us going in the face of decreased revenue, and enabling us to recall all of our staff once the store was permitted to reopen,” noting that sales in 2020 were down almost 30% from a year earlier.

Rob Crocker, president of Index Media, which publishes The Stranger, told CHS in an email that “over 90% of our revenues evaporated in weeks” when the pandemic first began. The company moved some of its operations, such as film festivals, online but was still down about 50% by year’s end.

The company’s PPP loans—nearly $1.3 million—helped the company retain some employees, but others have been cut “due to the inability to continue with some operations, such as paper publishing/delivery and in person events,” Crocker said. “We have used the funds to pay severance to those employees whom we could not retain due to ceasing of operations and to hire others in areas we’ve been able to continue.”

“If we had not received the PPP loans we did, we would have reduced staff and operations even further,” he continued. “Our losses in 2020 were staggering. Without the PPP our ability to stay in business would have been in question or at least greatly reduced.”

The Stranger announced early last year it was moving off of Capitol Hill with plans for a new office in the International District.

Most companies said they expected the loans to be mostly if not entirely forgiven, although some said they weren’t yet sure. Applications for forgiveness generally aren’t due until after all the loan proceeds are spent, meaning many businesses still haven’t applied for forgiveness. Under PPP rules, loans are forgivable if they meet certain criteria, such as spending at least 60% of the proceeds on payroll and maintaining employee and compensation levels for a specified period of time after the loan money is given out.

“We had the whole staff furloughed for one week, but once we received our PPP, we brought everyone back,” said Stuart Lane, executive chef of Spinasse and neighboring bar Artusi, which together received nearly $1.2 million in loans. “We kept everyone on payroll when we didn’t have a position for them or we weren’t open for in room dining service. We spent 100% of the funds on payroll and other allowed expenses.”

While the loan money didn’t save the company from making cuts—about half the staff was furloughed after the PPP money ran out—Lane said the loans “were critical in allowing us to take care of our people and give us time to figure out how we would proceed through the different stages that we had to navigate, particularly in regards to the changing guidelines.”

David Schomer, co-founder and CEO of Espresso Vivace, which was awarded $237,000 in loans, offered what he called “more of a philosophical observation” about the pandemic in general.

“This reminds us all that all the best laid plans we make and desire to create a good future for ourselves and our companies [are] subject to higher powers,” he wrote. “It’s quite humbling for someone like myself, for whom things have tended to work out over the years, to really just have my face rubbed in the gravel by mother nature.”

But after more than 30 years of Vivace’s steady growth in Seattle, Schomer said the pandemic has also reminded him of what a neighborhood coffee shop can mean to the community.

“I feel a deep spiritual connection to the customers,” he said. “We are their anchor to normality and an important ritual in their often turbulent urban lives. Never have I felt more proud and satisfied to create this beautiful coffee for Seattle.” 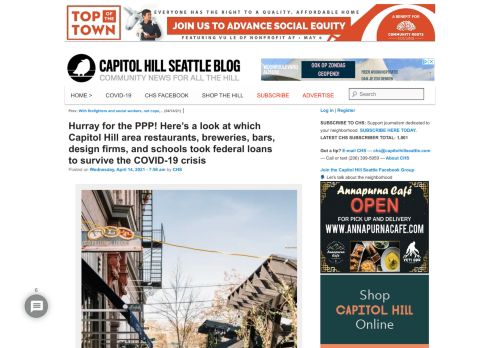 This article has been aggregated from capitolhillseattle.com and they maybe/are the copyright owners of the same. If you are the Author/Copyright owner of this article and want us to remove the same then send an email to admin@blog.restaurant so that we can delete it immediately. We sincerely regret and apologies for any inconvenience caused to you due to the same. Though it is your decision but please take note that the link to your website and the article have been given above, within and on the bottom of the article.