How Restaurants Retooled for Takeout and Survival

How Restaurants Retooled for Takeout and Survival 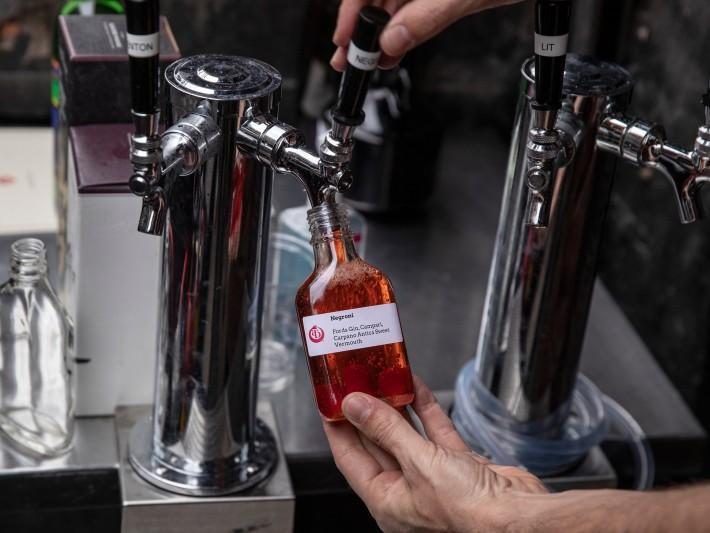 The owners’ resistance to takeout is almost forgotten. “If we want the business to survive, we had to change the business model,” said White.

Another restaurant rethinking form and function is Planta, a Miami-based chain of plant-based cafes. Earlier in the pandemic, business was limping along with limited indoor dining and a modicum of takeout. For Steven Salm, Planta CEO, and his partner, chef David Lee, the only way to sustain 10 restaurants and 550 employees was to fashion their food into something that could be shipped across the country, which meant rethinking how to prep, cook, freeze, and seal pizzas, burgers, and dumplings, their most popular item.

Stuffed with a range of veggies—shiitake, spinach, and potato—dumpling wrappers stick like glue to keep their contents contained. They also stick to other dumplings, which can lead to falling-apart-ness. Planta had to engineer a precise system for laying out the dumplings, flash freezing, and vacuum sealing them: If there was too much moisture in the freezer bag, the wrappers would stick together. If there was too much oxygen, the dumplings would smush and lose shape. If they weren’t packed tight enough, just barely touching but not sitting on top of each other, the freezer bag would roll like a toothpaste tube and crack the things open. As they were working out the process, Salm sent daily dumpling packages to friends and influencers who would take photos of every corner and crimp upon arrival before receiving the go-ahead from Salm to toss them in a pot of simmering water.

Now the restaurant chain is sending out hundreds of next-day boxes a week, kept cold by dry ice blocks, though Salm would really like to figure out how to send them second-day instead. Much cheaper. And Salm and Lee aren’t slogging through this “little” project only to pivot back when the restaurant industry comes back online. “We wanted the Planta-at-home brand to feel special,” says Salm. Dumplings arrive accompanied by cute glass jars filled with truffle soy sauce and chili oil. Once they’re empty, you’ll keep them around.

At Bathtub Gin, a somewhat hidden bar in New York City, the problem was how to keep selling cocktails even when no customers were allowed inside. “It’s been a long, hard struggle,” says beverage director Brendan Bartley. Prior to Covid, Bathtub Gin was known for its intricate cocktail menu—a 30-ingredient concoction was common. Once the pandemic struck, Bartley set to work recreating his drinks so that he could bottle them for takeout, delivery, and eventually national shipping. For bonus points, the Australian spirits expert also wanted them to be shelf stable for six months. When the bar reopens, the plan is for a single staffer to make use of those same bottled cocktails—fewer people meant a safer workforce. And he wants zero waste.

Some drinks like the complex 17-ingredient, 15-step “If You Like Piña Colada” could be made in advance and bottled. Others, like the “Lime-Less Margarita,” were tougher than you might think. Bartley says the problem with limes, and really any citrus, is that they’ll eventually ferment in the bottle and spoil. But acids give that pleasant tang, and, well, a margarita needs lime like the rim of the glass needs salt. Bartley was able to replicate the crucial fruit by adding citric, malic, and tartaric acid plus lime oil to a blend of tequila, agave, and distilled water. “We have this ideology that fresh is best,” said Bartley. “But it’s not always the best thing to use when you’re trying to make things consistent.”

Make A LOT of Reservations

Not to be dark, but one thing people don’t need right now is dinner reservations. This left restaurant reservation apps like Resy, Tock, and Open Table scrambling to figure out news ways to make money. Pre-Covid, Tock allowed fancy restaurants to sell prepaid dinner reservations, what Nick Kokonas, CEO and founder of Tock, calls “tickets.” When the pandemic struck, Tock was sitting on tens of millions of dollars in restaurant tickets that would need to be cancelled and refunded. “There was an existential risk to both of my businesses,” he said. (Kokonas is also the co-owner of The Alinea Group in Chicago, which includes the three-Michelin-star Alinea.) 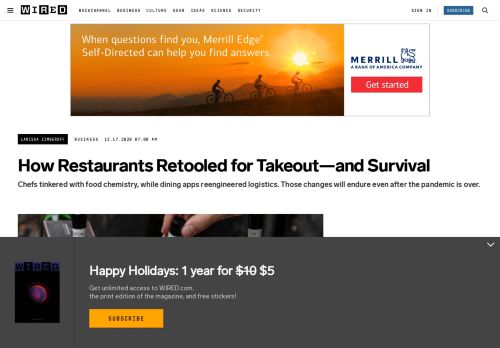 This article has been aggregated from www.wired.com and they maybe/are the copyright owners of the same. If you are the Author/Copyright owner of this article and want us to remove the same then send an email to admin@blog.restaurant so that we can delete it immediately. We sincerely regret and apologies for any inconvenience caused to you due to the same. Though it is your decision but please take note that the link to your website and the article have been given above, within and on the bottom of the article.