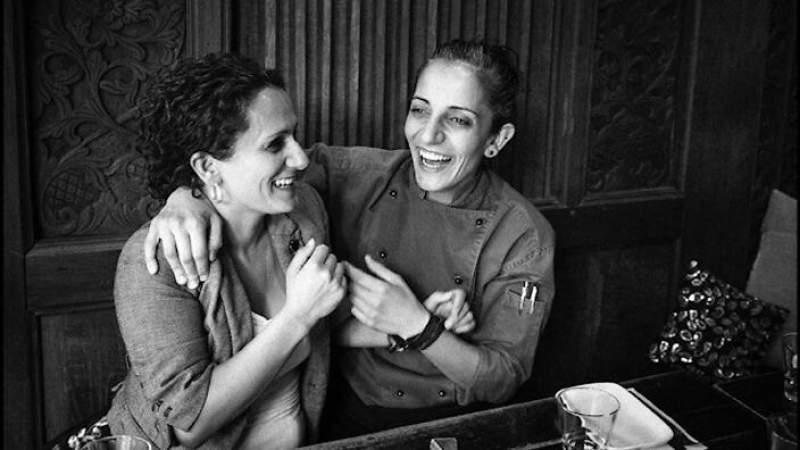 News Source/Courtesy: www.sbs.com.au
From peeling garlic on the floor to owning an award-winning Syrian restaurant — this is the journey of the Syrian-Australian Salloum sisters.

How to entertain family and friends was something that sisters Carol and Sharon Salloum learnt before they could even read or write. The hardworking duo are proud owners of their Syrian-inspired restaurant, Almond Bar, located in Darlinghurst, an inner suburb of Sydney in NSW.

Motivated by their family's passion for food and how it unites people, the pair wanted to create a place where guests could feel as if they were dining with family. The menu features authentic, modern Middle Eastern cuisine, including many of the dishes that they grew up eating. Almond Bar is soon to celebrate its 15th birthday and the sisters attribute much of their restaurant's success to the hard work ethic they developed from the dinner table.

Along with their two brothers, Carol and Sharon were brought up in a traditional Syrian household where Arabic was the only language they were allowed to speak. Their strict upbringing mirrored that of their parents who both grew up in Syria and migrated to Australia in 1972.

Having never been educated at university, the Salloum parents were determined to ensure that all four of their children understood the importance of hard work. Every day, the siblings were required to perform a series of domestic chores, which for the girls, mostly revolved around food preparation and hospitality. While their duties and responsibilities evolved over the years, one rule remained the same: each family member had to be seated at the table at 6pm, ready for dinner.

"Even if we were invited out to dinner with friends, we would actually eat at home first just so mum wouldn't get upset," Sharon explains. "Then we would go out just to avoid any arguments."

The Salloum dinner spread was always a buffet-style meal full of beautiful salads, spiced stews and vegetable-centric rice dishes. Preparations usually began a day or two in advance and were always done by the women.

"Prior to having machines and processes that would make it, we would actually have to crush the garlic in a mortar and pestle, and mum would make toum by hand out of that," Sharon recalls. "We would sit on the floor with a bowl in-between our legs and we would peel the garlic cloves and then bang it with the salt." As the oldest sibling, Carol was forced to learn how to cook from a young age and developed a love-hate relationship with the kitchen. She recalls being taught to make vine leaves and tabouli from age five and was serving Arabic coffee to visitors by six. Unlike her sister, Sharon loved cooking growing up and dreamed of being a chef. She enjoyed watching and cooking alongside her mother and aunties in the kitchen, and later on, introducing them to new cuisines and ingredients.

Looking back, both sisters are grateful it was compulsory that they learn to cook the Middle Eastern meals that their parents ate growing up. They speak proudly of the opportunity it has provided them to bring a taste of Syrian cuisine to Sydney. Whenever Carol and Sharon host dinner parties, they love introducing people to their favourite childhood meals, including kafta an piyata, mukloubi and mulukhyieh.

"Mulukhiyeh is our favourite! It's one of those meals that brings back memories for everyone, memories from their childhood," Carol explains. "We have a night dedicated to it at Almond Bar and it sells out! It's a great dish but because the leaf itself is rare and only grows at certain times of the year, and mum and dad grow it for us for the restaurant."

"Mulukhiyeh is our favourite! It's one of those meals that brings back memories for everyone, memories from their childhood."

It wasn't just the food Carol and Sharon ate that taught them about their Syrian heritage. The dinner table was monumental in educating the sisters about the importance of putting others first and creating a seat for anyone and everyone at the table.

Given that both of their parents had several siblings, it was not unusual for the Salloum family to have relatives and family friends invited for dinner each night.

"There was always an abundance of food and that was based on the belief that if people dropped in whilst we were having a meal, they should be welcome at the table," Sharon explains.

Their parents' generosity and use of food as a vehicle to provide care for others was the main inspiration for opening Almond Bar in 2007.

"We want people to feel welcome. We want them to feel good when they come in and that's what we learnt growing up," Carol says. Despite owning an award-winning restaurant, Carol and Sharon's mother will always remain head chef of the Salloum household. The family, along with their kids, now meet every Friday night for a loud and chaotic feast filled with laughter, arguments and overeating.

"We're often laughing about our childhood, we often reminiscence, we'll joke about things, we'll laugh about how now they struggle to get (their kids) to eat dinner," Carol says. "If we did that, we'd have been in a lot of trouble…things are so different between the generations.

"We want people to feel welcome. We want them to feel good when they come in and that's what we learnt growing up."

Carol and Sharon savour their memories of family dinners when they were younger. Despite, the embarrassment it may have caused, they wouldn't have it any other way. Both sisters smile as they recall times of being kicked off the dinner table for laughing too much or sneaking food from each other's plates.

Hospitality is not just a job for Carol and Sharon Salloum, it runs in their blood. They believe that food brings people together and will always welcome everyone at their table. The siblings attribute their passions and hard work ethic to the lessons they were taught over dinner.

They aim to continue sharing their Middle Eastern culture through the meals they love and by bringing people together. 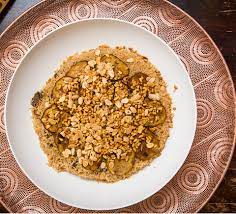 Place the eggplant slices in a bowl and cover with cold water and 1 tablespoon salt. Leave to soak for 30 minutes then remove and lay flat on a clean towel to dry on both sides. This will take about 2 hours.

2. Meanwhile, place the lamb in a medium saucepan and cover with water. Add the baharat, lemon, cassia or cinnamon, bat leaves and remaining salt. Bring to the boil, then reduce the heat to low and cook, covered for about 2 hours or until lamb is tender.

3. Heat the vegetable oil in a deep frying pan. Add the eggplant in batches and cook in both sides until brown.

4. Remove and drain on a plate lined with paper towel. Continue stacking the cooked eggplant on the plate with additional paper towel between each layer to soak up any excess oil.

5. Melt 40 g of the butter in a medium saucepan add the rice and stir until the rice is well coated in the butter.

6. Remove the lamb from the saucepan, reserving the he stock, and arrange in the base of a large flameproof casserole dish. Spook over half the rice, top with the cooked eggplant and finally the remaining rice. Strain the lamb stock, and pour evenly over the rice. Add just enough stock to cover the rice.

7. Cover with a lid and cook over low heat for 40 minutes or until the rice is fluffed up and cooked through.

8. While the rice is cooking, melt the remaining butter in a small frying  pan, add the pine nuts and cook over medium heat until the pine nuts are golden brown, stirring regularly so they don’t catch and burn. Remove with a slotted spoon and drain on paper towel.

10. Scatter the pine nuts over the mukloubi and drizzle with a little extra virgin olive oil. Serve with plenty of yoghurt. This article has been aggregated from www.sbs.com.au and they maybe/are the copyright owners of the same. If you are the Author/Copyright owner of this article and want us to remove the same then send an email to admin@blog.restaurant so that we can delete it immediately. We sincerely regret and apologies for any inconvenience caused to you due to the same. Though it is your decision but please take note that the link to your website and the article have been given above, within and on the bottom of the article.