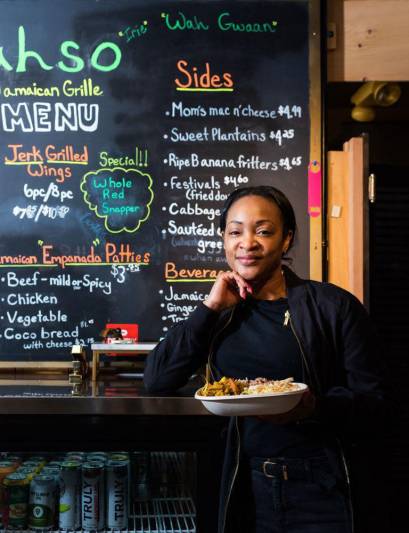 The Local Crowd (TLC) Monadnock, a Keene-based fundraising organization, has bought another $7,000 in gift cards from area restaurants, bolstering its recent efforts to stimulate the local economy during the COVID-19 pandemic.

TLC Monadnock launched The Monadnock Restaurant Project earlier this year, purchasing 610 gift cards — worth a combined $10,000 — from more than two dozen area eateries and giving them to staff at several large employers in the region.

Calling the project a “homegrown stimulus effort,” TLC Monadnock aimed to encourage spending at those restaurants and reduce the pandemic’s financial hit to that industry. Project organizers expected people to spend twice the value of their gift cards and said the stimulus’ overall boost to the local economy could far exceed $20,000, TLC Monadnock program manager Jen Risley told The Sentinel in January, citing a 2014 economic-impact study.

The organization is now collecting data from its partner restaurants to examine the restaurant project’s initial impact, Risley said Wednesday. She expects to have that information by the end of April but said feedback from restaurant owners has been positive.

The project included distributing nearly $500 in gift cards from Yahso Jamaican Grille in downtown Keene, according to owner Gail Somers.

In addition to encouraging one-off spending, Somers said the TLC Monadnock program may also expand eateries' clientele. She said some people have already used the gift cards from Yahso and that, based on past customer behavior, she expects their spending exceeded the cards' value — but added that it has been hard to track that data.

"I'm definitely anticipating that people spent more than the gift cards," she said.

Backed by a recent fundraising push, TLC Monadnock has purchased an additional 600 gift cards and began distributing them to local employers last week, according to Risley.

This second phase of the restaurant project will include many of the same eateries from the initial round, all of which were in Keene. However, organizers have also added several restaurants in nearby towns, including Stuart & John’s Sugar House in Westmoreland and Jeanne’s Family Diner in Swanzey.

“We want to see this money get to work as quickly as we can,” Risley said.

TLC Monadnock purchased the latest round of gift cards with proceeds from a crowdfunding campaign that raised more than $30,000, it announced earlier this month.

More than 100 local residents donated to that effort, as did at least a dozen local businesses and organizations, Risley said. Savings Bank of Walpole and the downtown Keene artist studios 17ROX matched contributions, she said. (The Sentinel also donated to the project and participated in its first phase with a gift-card giveaway for readers.)

TLC Monadnock has spent nearly $17,000 on gift cards across the entire stimulus effort and plans to put its remaining funds toward other programs backing the local food industry, according to Risley.
advertisement

In addition to the direct impact of that investment, the restaurant project has also inspired other area businesses to launch similar programs.

The Richards Group, a Brattleboro financial and insurance agency with an office in Keene, bought gift cards from local eateries and donated them to front-line workers in the region, Risley said. The Historical Society of Cheshire County, the Northern Lights cheerleading academy and Clark-Mortenson Insurance have also given restaurant gift cards to area residents.

“We really wanted to spur a movement,” she said. “We knew that our $10,000 initial goal wasn’t really going to do all that we wanted it to do without community support, so that was really the best thing to happen.”

Even as the second round of its stimulus effort gets underway, TLC Monadnock is eyeing future projects.

Some of its funds will help local restaurants cover the cost of participating in the inaugural A Taste of Keene Food Festival on June 5, according to Risley. The Central Square event, organized by the city and the Keene Young Professionals Network, is meant to help eateries struggling during the pandemic.

TLC Monadnock may pause the restaurant project in the summer, Risley said, since eateries will be able to offer outdoor dining and may draw more diners as vaccination rates rise.

She added, however, that restaurants may still need financial support as they ramp up operations that have been limited during the pandemic.

“It’s not … like they’re going to immediately burst back into life,” she said. “They’re kind of going to have to dig themselves out of a hole.”

The organization plans to work with Walpole residents who are interested in starting a similar stimulus effort in that community, Risley said. Project organizers may also reconvene next fall and discuss ways for local restaurants to thank the community for its support over the past year.

Risley said TLC Monadnock is interested in using the “homegrown stimulus” model to help businesses weather future crises, like another public health emergency or a fire.

Somers praised TLC Monadnock and the local organizations that launched their own stimulus efforts, saying the programs were "very heartfelt."

"The initiative ... speaks volumes to the community support," she said. "It's really appreciated." 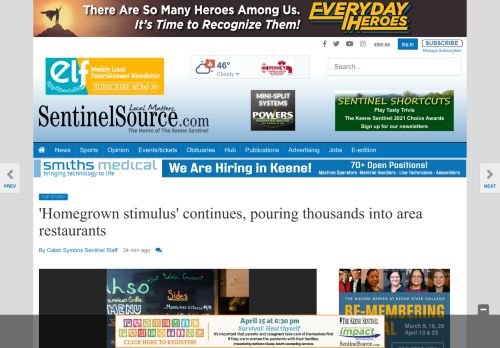 This article has been aggregated from www.sentinelsource.com and they maybe/are the copyright owners of the same. If you are the Author/Copyright owner of this article and want us to remove the same then send an email to admin@blog.restaurant so that we can delete it immediately. We sincerely regret and apologies for any inconvenience caused to you due to the same. Though it is your decision but please take note that the link to your website and the article have been given above, within and on the bottom of the article.