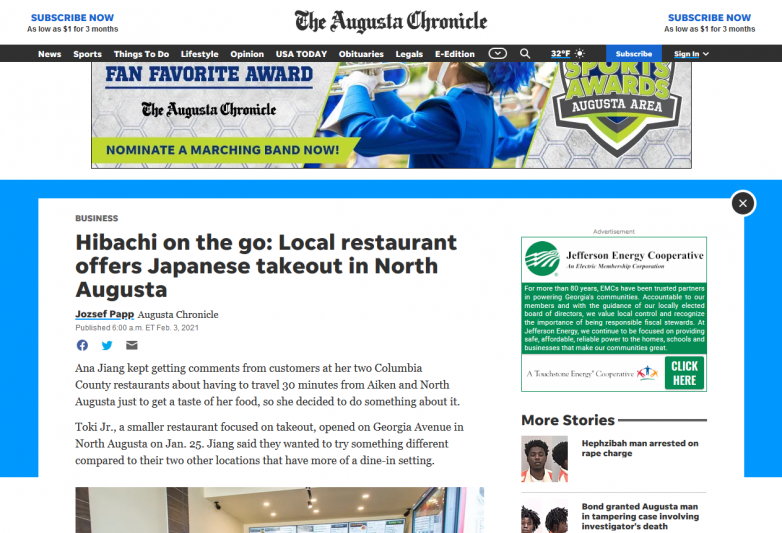 Ana Jiang kept getting comments from customers at her two Columbia County restaurants about having to travel 30 minutes from Aiken and North Augusta just to get a taste of her food, so she decided to do something about it.

Toki Jr., a smaller restaurant focused on takeout, opened on Georgia Avenue in North Augusta on Jan. 25. Jiang said they wanted to try something different compared to their two other locations that have more of a dine-in setting.

Jiang said they opened their first location more than a decade ago on Furys Ferry Road before opening a second location on Washington Road in Evans. She said they’ve been thinking about expanding into North Augusta for a while.

“We were always interested looking to expand into that area. We then encountered the pandemic and that took us a step back," she said.

Jiang said the original plan was to open in early 2020 and they were looking at places, building some ideas and doing research about the best location when the pandemic hit. As a result, they had to close the restaurants and put plans for a third location on hold.

“At that time, it really did affect us,” Jiang said. "It was tough for us, tough for our employees because we had to close, so it affected them.”

While thinking about the restaurant, the idea of a takeout place began to take shape. The restaurant offers the most popular items on the menu at the other two locations, including poke bowls, hibachi and udon.

For more than three decades, Jiang and her husband have lived in the area and have grown fond of the community. They decided on a Japanese restaurant mainly because of her husband.

“My husband, that’s what he has done, since he was in his late-teens, early 20s. We both worked at restaurants when we were young, we always served the customers, so we are just familiar with the cuisine, knowing what really tastes good to us,” she said. “We wanted to share that with the community.”

As a local business owner, Jiang is hopeful that the COVID vaccine will help things get back to normal soon. She encourages everyone to get it and is excited about being in North Augusta and serving her customers.

“We are small business owners, we are not a national brand or any corporation or anything like that,” she said. “We are locally owned and operated. We are from the area.” 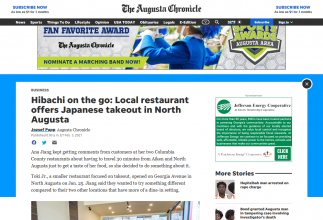 This article has been aggregated from www.augustachronicle.com and they maybe/are the copyright owners of the same. If you are the Author/Copyright owner of this article and want us to remove the same then send an email to admin@blog.restaurant so that we can delete it immediately. We sincerely regret and apologies for any inconvenience caused to you due to the same. Though it is your decision but please take note that the link to your website and the article have been given above, within and on the bottom of the article.