SACRAMENTO (CBS13) – A local restaurant is looking for help catching a gas thief who’s funneling costs from their bottom line.

The manager of the Mikuni on Hazel Avenue, Tommy Mack, is assessing the damage after a gas thief was back at it this weekend.

READ MORE: Sacramento Mother Of 4 Killed After Stopping To Help Pedestrian Who Had Also Been Hit

“He gets under the car and cuts out the gas lines and pumps it through a funnel or tubing,” said Mack.

He got away with gas two weeks ago, but this Saturday someone scared him off before he was caught on camera.

“He drilled a hole and left the tub there but guess he didn’t finish the job. He just stopped,” he said.

Each time he strikes, it leaves thousands of dollars in damage and then there’s everything else.

“Just the time of finding a new truck — it’s a hassle. We’re just glad nobody got hurt,” he said.

It’s been a year that’s hurt financially — between the pandemic and petty crimes at several of their restaurants. There was damage during protests downtown, and then at the Fountains location.

“Some people took the chairs and the tables, and then we put it on social media, and then the next day they brought it back,” he said.

Management posted about it all on social media. They understand this is part of doing business. It’s tough to eat the repair costs in a year that’s been uncertain due to the pandemic. They reported it to the police and are upgrading their surveillance system.  They hope next time more eyes will reveal who is responsible. 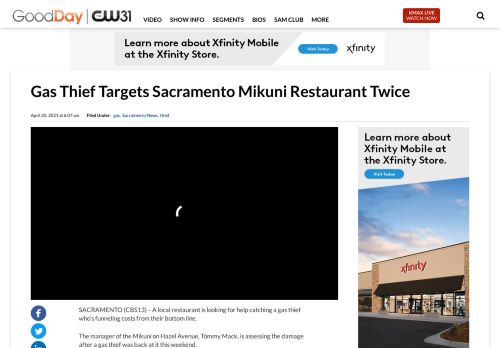 This article has been aggregated from gooddaysacramento.cbslocal.com and they maybe/are the copyright owners of the same. If you are the Author/Copyright owner of this article and want us to remove the same then send an email to admin@blog.restaurant so that we can delete it immediately. We sincerely regret and apologies for any inconvenience caused to you due to the same. Though it is your decision but please take note that the link to your website and the article have been given above, within and on the bottom of the article.