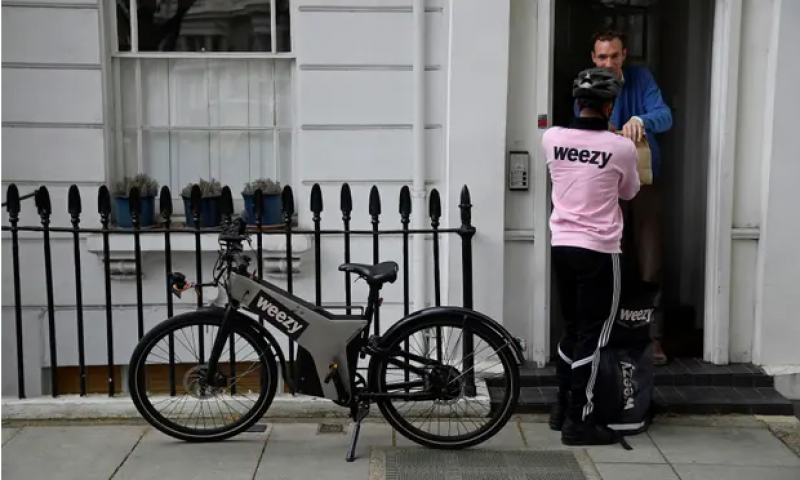 Cheap groceries, free delivery, on your the doorstep in 10 to 20 minutes. Fast-track grocery services have sprung up like weeds during the pandemic with players pulling out all the stops to tempt in shoppers.

At least seven key players are vying for dominance in the UK. Most are currently focused on London, with only Weezy, Fancy and Gorillas venturing outside the capital so far. But all the major players, who also include Getir, Dija, Zapp and Jiffy, are planning to expand into new cities this year with Manchester, Birmingham, Bristol and beyond in their sights.

Jiffy and Getir are both aiming to open more than 90 hubs across the country with Dija is aiming for every major city by the end of the year. 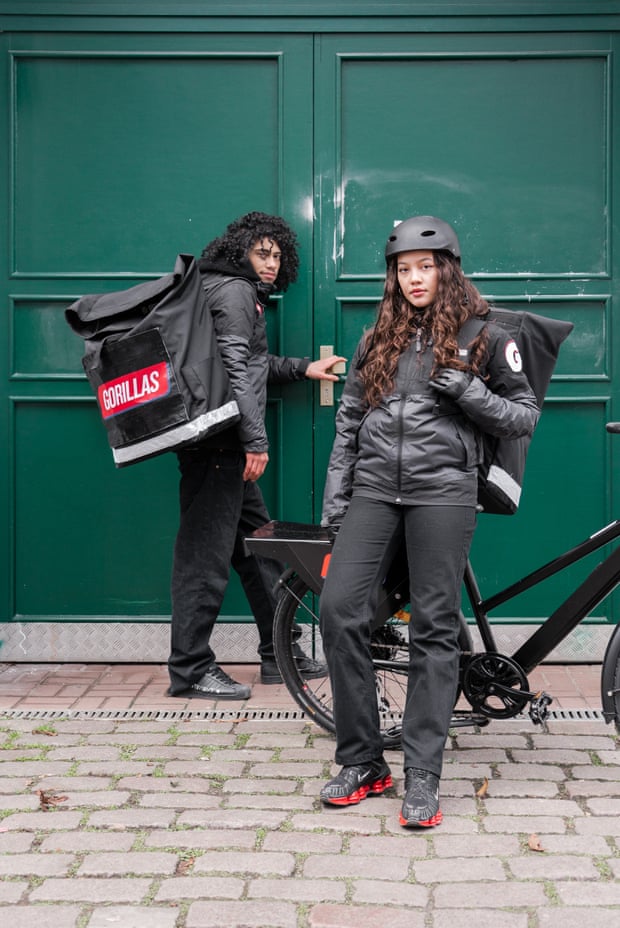 Expansion is being pumped up by $14bn (£9.8bn) of investment into this hot new market globally since the beginning of the pandemic, according to financial industry analysts PitchBook. Getir’s latest funding round valued the Turkish company at $2.6bn, Gorillas has splashed out on a major television advertising campaign.

Online supermarket orders and deliveries may now be an ordinary part of many families’ lives, accounting for about 14% of the entire grocery market. But these new “quick commerce” players are gunning for the corner shop, aiming to make ordering a pint of milk, a bottle of wine and some crisps via your phone as natural as a turning to Spotify or Netflix.

Regular Getir user Steve Thomas, 41, in Hackney, east London, says he uses the app to buy specialist beers such as Beavertown and Brewdog as, with the current offer of free delivery, he can get them cheaper via the app than popping to a convenience store or via services such as Deliveroo or Uber Eats.

“Prices are extremely reasonable,” he says. “It’s great if you are watching the football or a few friends pop round.” 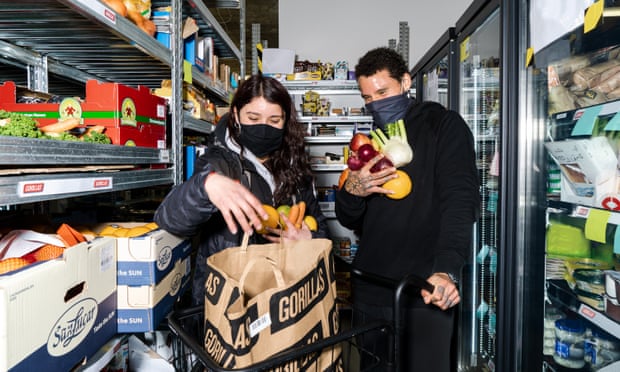 The apps may appear similar to Ocado’s Zoom or Sainsbury’s Chop Chop, which both offer grocery deliveries in under an hour, or buying groceries from Waitrose, the Co-op or Aldi via Deliveroo. Their point of difference is a faster and, arguably, more reliable service using “dark stores” – small very local distribution centres.

They stock no more than about 4,000 different items, 10 to 15 times fewer than a typical supermarket, but can target ranges to suit local shoppers and are far less likely to make substitutions because they know exactly what is in stock. Some, notably Weezy and Gorillas, supplement their offer with products from local specialists such as bakers or pizza makers. Delivery charges can be lower too: Weezy charges £2.95, others as little as 99p.

Shoppers range from students to harried parents stuck at home with kids, to young professionals wanting a quick meal after work or dinner party hosts in a last-minute panic over a forgotten ingredient.

Unlike takeaway food delivery firms, nearly all the grocery businesses employ their riders directly, paying by the hour, and providing them with electric bikes or electric mopeds. 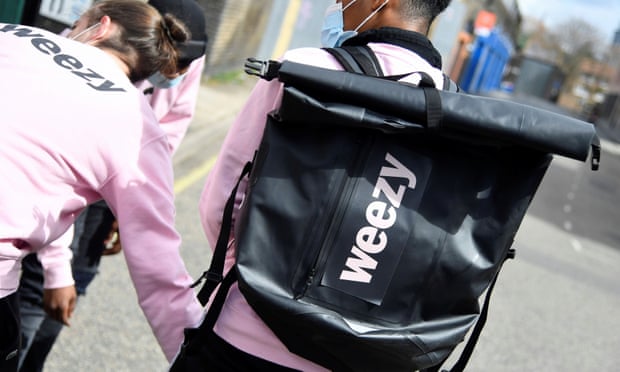 “You can’t offer consistency and wow customers every time by sending gig riders into stores,” says Steve O’Hear at Zapp. Couriers delivering from shops cannot be sure if goods are in stock and will always take longer to deliver, he claims.

Groceries processed and delivered by online supermarket Weezy in London.

These start-ups only account for a tiny slice of the spend via takeaway delivery apps such as Deliveroo – less than 0.4%, according to analysts at Kantar. However, they are rapidly expanding. Some estimates suggest they could eventually account for up to half the UK’s online grocery market – currently valued at almost £18bn.

Getir, the most established of the European quick-commerce groups, has signed up 3.9m new shoppers so far this year on Android phones, according analysts at App Radar.

“If anything we see growth picking up. People are now used to ordering online for a big weekly shop but don’t want the constraint of [waiting in for it if they are not working from home].”

The phenomenon is international. In Moscow, 30% of its online grocery market is already taken up by quick commerce. Jiffy co-founder Vladimir Kholyaznikov, who previously worked on Russian food delivery service Foodza, believes it will be a “significant part of the market”. He adds: “Nobody can win this alone. There will be multiple successful companies.”

Eleanor Cooke, a lawyer in Battersea, south London, who now uses Weezy three or four times a week, says the app has become a habit after signing up for a money-off deal. “It has been a gamechanger. I started using it for snacks, crisps and a bottle of wine. I’ve been using it for six months and its just grown and grown.”

However, one supermarket boss expressed sceptism that quick-commerce could grab as much as half of the online market. “People who want to raise money for their brilliant idea need predictions like that,” he said.

“It sounds like an urban offer and not for the suburban family.”

Urban or suburban, many more families will be getting a chance to judge if it’s for them this year. 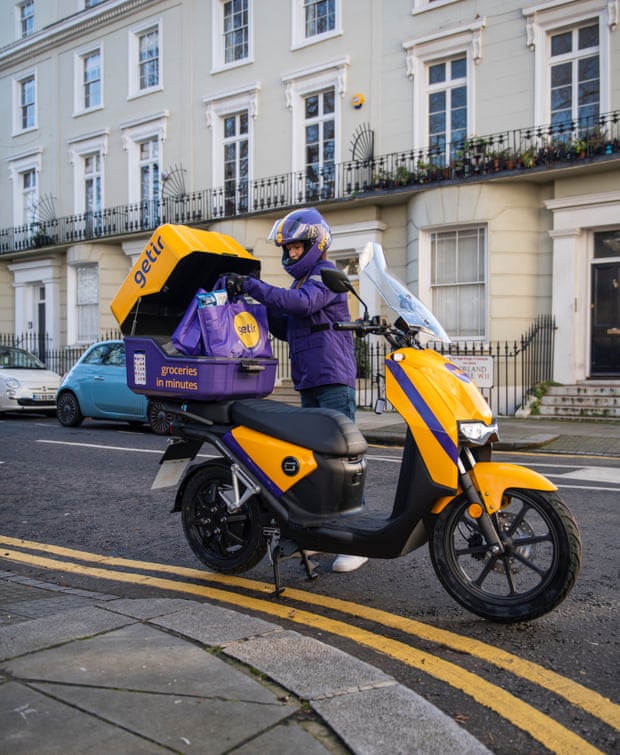 Launched in March 2021 by former Deliveroo executives, Dija raised $20m of seed funding in December. It is currently operating in London, Paris and Madrid, opens in Cambridge on Monday after buying local operator Genie, and plans to enter all major UK cities by the end of this year, including Manchester, Birmingham, Bristol and Edinburgh.

Stocks 4,000 different products delivered within 10 minutes for a 99p fee.

Launched January 2020, Fancy was bought by US operator GoPuff in May 2021. GoPuff is now valued at $8.9bn after raising $3.9bn in October last year. Currently making deliveries in Newcastle, Leeds, Liverpool, Manchester, Bristol, and Birmingham , with planned openings in London, Sheffield, and Nottingham, among others, in coming months.

Choice of more than 1,000 products which can be delivered within 30 minutes for £2 fee.

Founded in Turkey in 2015, where it already serves 25 cities, Getir launched in the UK in February this year. It already has 25 dark stores , in the capital, and is opening in Birmingham and Manchester in the coming months. Within a year, it hopes to have reached 15-20 UK cities including Bristol, Liverpool and Glasgow. The company raised $300m in March in a deal valuing it at $2.6bn, just two months after raising $128m.

Founded last spring in Berlin by Kağan Sümer and Jörg Kattner, Gorillas launched in the UK in March this year. It serves London and Manchester , and is already advertising for staff in Bristol, Cambridge, Nottingham and Southampton. The company raised $290m in March valuing it at more than $1bn.

Jiffy’s co-founder Vladimir Kholyaznikov ran a similar start-up in Moscow before launching Jiffy in London in April 2021. The company is planning up to 100 dark stores in London and other cities this year. It raised £2.6m in seed funding in March.

Already serving London, Manchester and Brighton, with plans to be in other major cities including Birmingham and Edinburgh by the end of the year, Weezy launched in July 2020. Co-founder Alec Dent previously worked at ride sharing app BlaBlaCar, and the firm raised $20m in January 2021.

Launched in London last summer by a team including former managers from Amazon and the Nigerian online grocer Jumia, Zapp is currently recruiting in Manchester. It raised new funds in March taking total backing to $100m since launch.

This article has been aggregated from www.theguardian.com and they maybe/are the copyright owners of the same. If you are the Author/Copyright owner of this article and want us to remove the same then send an email to admin@blog.restaurant so that we can delete it immediately. We sincerely regret and apologies for any inconvenience caused to you due to the same. Though it is your decision but please take note that the link to your website and the article have been given above, within and on the bottom of the article.