CRAVE American Kitchen & Sushi Bar is temporarily closed due to a malfunctioning piece of equipment, according to a message posted Monday evening, April 19, on the popular West Acres fine dining restaurant’s Facebook page.

“You know I’m not 100% on today yet, but it’s not looking good for today,” Brown said. “Tomorrow looks a little better. We’ll 100% will be open by Friday and that will be our worst case scenario. We’re just waiting for the good news, basically.”

Brown said the makeup air supply unit on the roof of the restaurant, which replaces air removed by the kitchen ventilation exhaust hood, is out of commission.

“It equalizes the air pressure that gets sucked up by the hood. It sucks all of the nasty air out of the grill. If that thing doesn’t kick out the correct amount of air, then it creates a pressure imbalance in the restaurant. It could break glass,” Brown said. “We can’t run any hot equipment while that’s not working. It’s kind of a special piece of equipment.”

Monday night's Facebook message apologized for the closure and invited patrons to stop by once the repairs were completed.

“As many of you have noticed, CRAVE - West Acres is currently closed. We want to assure you that we're doing everything we can to reopen and have you join us again!,” the message said.

“Unfortunately, a major piece of kitchen equipment has malfunctioned and is proving difficult to repair. Until these repairs are complete, we must remain closed,” the message added. “We apologize for the inconvenience and sincerely hope that each and every one of you are able to join us after we reopen. Thank you so much for your support!”

The popular restaurant opened in late October 2019 on the east side of West Acres.

CRAVE is the first restaurant in The District, which is envisioned as a cluster of restaurants and “experiences” to help fill the 30,000 square feet of space leftover after Best Buy took up much of the square footage that had been used by former mall anchor Sears.

When The District was announced in 2018, West Acres Development’s chief executive Brad Schlossman said it was envisioned as a home to four to five restaurants. 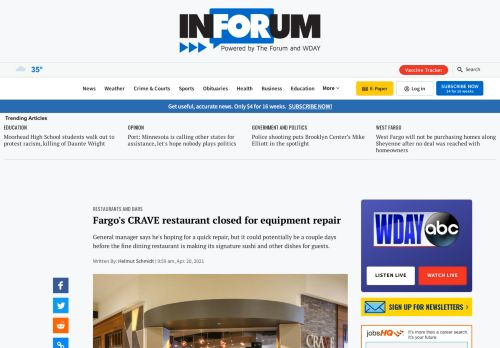 This article has been aggregated from www.inforum.com and they maybe/are the copyright owners of the same. If you are the Author/Copyright owner of this article and want us to remove the same then send an email to admin@blog.restaurant so that we can delete it immediately. We sincerely regret and apologies for any inconvenience caused to you due to the same. Though it is your decision but please take note that the link to your website and the article have been given above, within and on the bottom of the article.