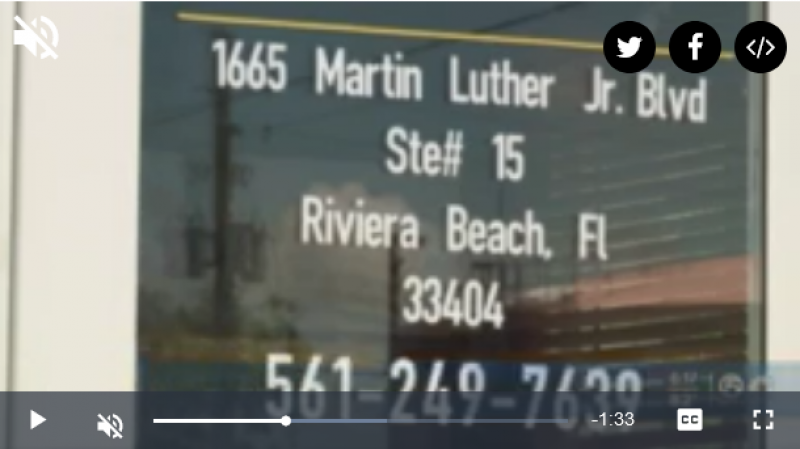 Walking into Vegan On The Go, you feel the warmth before you reach the counter.

"You can come on in, we gonna take care of you," said owner Tavarus Osborne.

The food is served up by Osborne, 33, a Fort Lauderdale native.

"I just want to be a great parent and I want to do what I love," Osborne said. "I want to find a way to do it at a different alternative route from where I grew up."

As of this month, this location is Osborne's second meat and dairy-free, plant-based restaurant.

The road to Riviera Beach wasn’t easy for Osborne. Before his first Vegan On The Go success in Fort Lauderdale in 2019, he had a different restaurant fail, leaving the father of eight homeless and near hopeless.

But even without a roof, Osborne still had family.

"He never stopped no matter if he’s in the gutter, he never stopped," said Tiffany Williams, Osborne's wife. "He knows he has to do this for his family. He’s trying to bring everyone to a better life."

Williams is just one of Osborne's many family members riding the vegan wave of success.

"We had to create jobs for the family so we could be with all day, and that’s what we do," Osborne said.

Osborne now works alongside his mother, brother, sister, nephew, and uncle to name a few. Even though he’s been open in Riviera Beach for less than a month, Osborne already has repeat customers drawn to the promise of a healthy vegan meal in an area where similar restaurants are scarce.

"It’s very very hard Like, if I’m not cooking something at home and I try to go out, it’s hard because they don’t offer vegan meals, especially burgers. That’s like hard to find," said customer Alyss Queen.

"Because one thing about great food health and wealth, people will travel for it. It’s not necessarily where you put it, but it’s what the foundation you put it standing on is," Osborne said.

This article has been aggregated from www.wptv.com and they maybe/are the copyright owners of the same. If you are the Author/Copyright owner of this article and want us to remove the same then send an email to admin@blog.restaurant so that we can delete it immediately. We sincerely regret and apologies for any inconvenience caused to you due to the same. Though it is your decision but please take note that the link to your website and the article have been given above, within and on the bottom of the article.