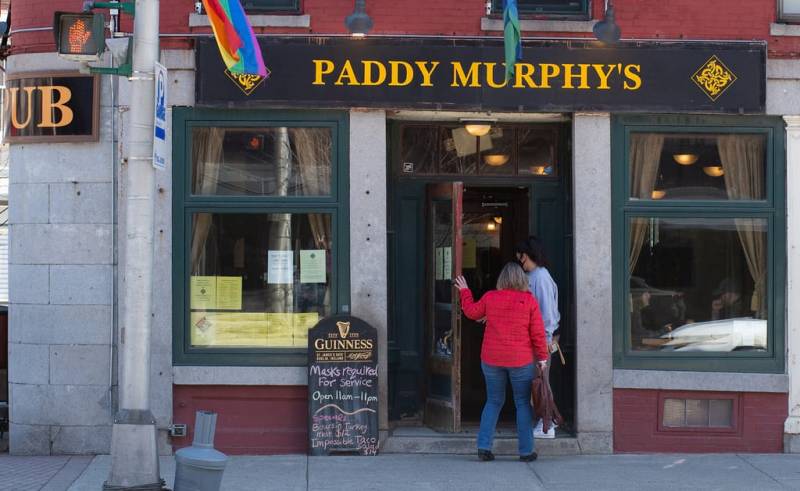 While indoor dining remained closed on and off for months during the pandemic, takeout and delivery were two lifelines for the beleaguered restaurant industry.

Third-party delivery apps DoorDash, Uber Eats and Grubhub rushed in to fill a huge demand for delivery services. Though all three services were available in urban areas in Maine before the pandemic, they became a big part of the survival scheme for restaurants of all sizes almost overnight.

A year later, however, restaurants are more closely scrutinizing the delivery apps’ business practices. There have been numerous complaints in Maine and nationwide that the apps list restaurants without their permission, use outdated menus and take up to 30 percent of the total cost of an order.

“It’s making customers think they are getting free delivery. But really, these apps make restaurants pay for it themselves. It sets local businesses up for failure,” said Tim Lo, who owns Bangor Beer Co., the sister brewery and restaurant to the Oriental Jade in Bangor.

Now that most restaurants have reopened and are starting to grapple with how their businesses have changed because of the pandemic, some are looking more seriously at regulating third-party delivery apps.

“I think, early on in the pandemic, people were afraid to say anything about these apps, because they needed any element of success to keep the business going,” said Greg Dugal, director of government affairs for Hospitality Maine, which represents Maine’s restaurant and lodging industries. “But now that it looks like we’re starting to come out of it, people are starting to say, ‘Hey, wait a minute. This isn’t fair.’”

It breaks down like this. A customer places a $30 order via a third-party delivery app. The site won’t charge the customer a delivery fee, but instead charges the restaurant fees of up to 30 percent of cost on that transaction — $9, for that $30 takeout order. That money goes almost entirely to the app, and not to the driver, whose pay is largely composed of tips, mileage and hours spent on the road. Grubhub has said that it takes 20 percent for unspecified “marketing” costs and 10 percent for delivery.

“These fees are onerous to businesses. Restaurants could be forced to increase their prices, which causes consumer confusion and irritability,” said Susan Price Stephenson, owner of Pepino’s Mexican Restaurant in Bangor.

Rachel Dobbs, who with her husband, John, owns Paddy Murphy’s in downtown Bangor, said she had a terrible experience with DoorDash and Grubhub and now no longer uses either app for her restaurant.

“It was overwhelmingly negative, because it was so hard to get them to update information, like when we changed our menu seasonally, and really tough to find someone who could handle a complaint or concern,” Dobbs said. “They also charge restaurant fees for promotion and use, which doesn’t work when your profit margins are small. Which is pretty much the case for every restaurant or bar.”

Paddy Murphy’s instead now uses CarHop, a Portland-based app that delivers food, alcohol and cannabis from more than 150 vendors across the state, which has emerged as a viable alternative to apps run by large, out-of-state companies. Instead of charging a fee to restaurants, CarHop charges a standard delivery fee to the customer.

By contrast, GrubHub has made it a company policy to add as many restaurants to the app as possible, regardless of whether they want to be listed. Orders placed via Grubhub may not, in every case, go directly to the involuntarily listed restaurants. Instead, delivery drivers may end up contacting them and placing their customers’ orders. The restaurant owner might be unaware that it’s a Grubhub order until the driver shows up and the app takes up to 30 percent off the cost.

Grubhub believes that this tactic will convert involuntarily listed restaurants into “partners,” who are fully integrated into the Grubhub platform.

“We believe there’s a benefit to partnering with restaurants and we’re deploying a sales team to try to convert these restaurants to partners, because it’s a better experience for anyone involved,” Katie Norris, a Grubhub spokesperson, told the website Eater in October 2019. “We think when we add restaurants they’ll see orders, and see the benefit of the Grubhub platform.”

Many restaurateurs and restaurant industry insiders see it differently.

“You shouldn’t have to work with someone you don’t want to work with,” Dugal said. “Most cities and states are dealing with this in one way or another, including now, apparently, in Maine. We support anything that benefits people in the restaurant industry, and we think these apps deserve the scrutiny they are getting.”

The National Restaurant Association recommends that any city or state regulations require apps to clearly notify restaurants when orders have been delivered and be more transparent about fees, in addition to potential fee caps.

Similar issues involving tech companies having an outsize effect on cities across the country have cropped up with apps such as Uber and Airbnb. With Airbnb in particular, many cities have sought to regulate the ways in which property owners can rent out rooms or entire properties, citing potentially negative effects on the availability of affordable housing. Portland already regulates short-term rentals, and Bangor is working on a short-term rental ordinance.

With delivery apps, city councils in New York City, Chicago, San Francisco and Seattle, as well as the Massachusetts Legislature, have all passed caps on how much an app can charge a restaurant. In Portland, City Councilors Pious Ali and Andrew Zarro are working on a measure that would cap fees that delivery apps can charge restaurants at 15 percent, and would require apps to get restaurants’ permission before adding them to the app.

“This is happening all over the place,” Ali said. “Businesses don’t know they are being added to the app. And they don’t know they’re being charged these fees. It’s definitely something we need to be responding to.”

In Bangor, the City Council has not discussed the matter of regulating delivery apps. But Lo, from Bangor Beer Co., said he’s had discussions with city staff, and would be in favor of a fee cap were it to go to the council.

“This is money that is being extracted from the local economy, and going straight to companies in San Francisco and Chicago,” he said. “That’s just not good for business.” 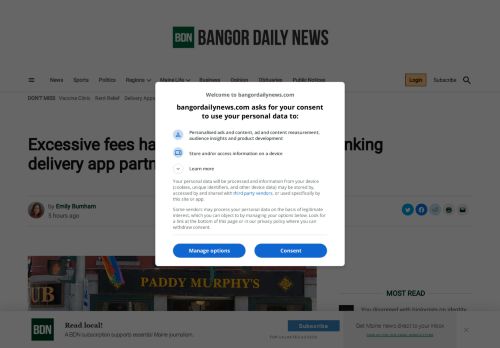