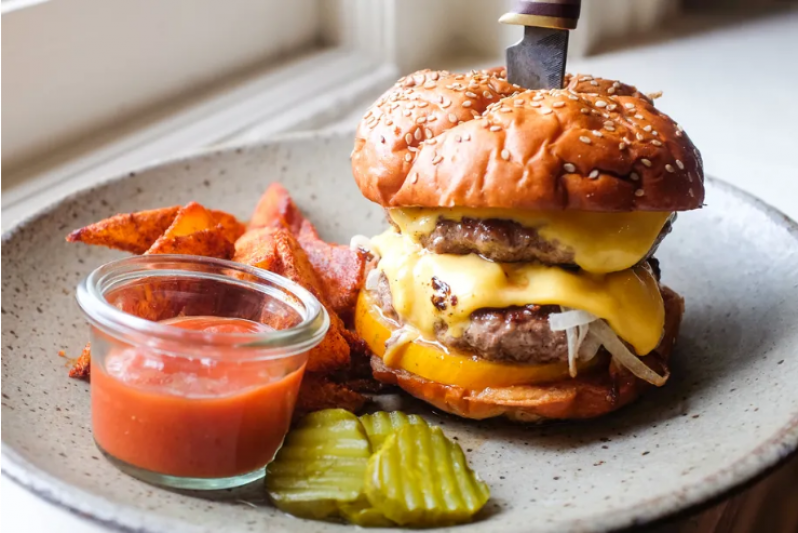 Fresh off the heels of President Joe Biden spooking conservatives into thinking he’s going to force everyone to give up hamburgers (he’s not, that was just a leap taken by the Daily Mail), recipe website Epicurious announced its own restrictions around beef. The website said it has officially cut the meat out of its future recipes: “Beef won’t appear in new Epicurious recipes, articles, or newsletters. It will not show up on our homepage. It will be absent from our Instagram feed.” This is all in an effort to encourage sustainable, environmentally friendly cooking. And before you buy that eight pound brisket out of spite, they’ve been doing this for about a year, and it hasn’t ruined anyone’s life yet.

Epicurious began publishing fewer and fewer beef recipes in the fall of 2019, and then stopped altogether in 2020. “For every burger recipe we didn’t publish, we put a vegetarian recipe into the world instead; rather than articles about ground beef, we talked about alt-meats,” they said. “And last summer, when America’s annual grilling holiday rolled around, we set our fires on cauliflower and mushrooms, not steaks and hot dogs.” Epicurious also says it’s been a hit with readers.

Epicurious cites studies and facts about beef that are familiar— raising beef is a significant contributor to greenhouse gas emissions, the production of fertilizer and pesticides required fossil fuel, the cattle industry’s destruction of the Amazon rainforest, and now the fact that meat production plants have been hotbeds of COVID spread, and have long been unsafe for workers. Individual choice, they argue, may seem like a drop in the bucket compared to reining in corporate emissions and advancing legislation but it is at least a drop. They also note that there are environmental costs associated with everything from seafood to soy. “But every time you abstain from beef at the grocery store or a restaurant, you send a signal — to the grocery store, yes, but also, and perhaps more influentially, to whomever you talk to about your decision,” they write.

The Beef Question is shaping up to be the dietary drama of the time. In India, beef consumption has become a political issue in the fight against Hindu nationalism, as Muslims have been violently targeted in the name of “cow protection,” and beef consumption is seen in some regions as a fundamental issue of religious diversity and individual liberty. Beef consumption is also rising in places like the U.S. and China, as a boom in international production has resulted in cheaper prices, making beef more accessible than ever. And over the weekend in the U.S., conservatives who were mistakenly convinced Biden was going to take away their meat, took to the internet to brag of their struggle beef to own the libs, or something.

There’s also been the rise of “plant-based” faux meat like Impossible Foods and Beyond Meat, meant to mimic the taste of ground beef so well that it’ll lure eco- and health-conscious Americans away from the real thing. And while it’s been popular, it’s already faced backlash over being “highly processed.” Some argue that beef and dairy can be part of a sustainable diet, as long as they’re purchased from independent farms that use more holistic agricultural techniques. But it’s going to take a massive restructuring of the entire food chain to make that the dominant way beef is farmed, and even if that happens, there will be far less of it to consume.

Epicurious insists it has no “agenda” aside from helping home cooks cook “better,” which is slightly disingenuous. If it had no agenda, no changes would have been made. Instead, the site is working from the premise that both the planet and anyone’s individual life will be “better” with less beef. Epicurious still has hundreds of beef recipes on its site, and that it will still include older beef recipes in broader collections, so it’s still a resource for any beef eater. But it’s also asking readers to rethink beef, something they’ll only be prompted to do more and more in the coming years. This article has been aggregated from www.eater.com and they maybe/are the copyright owners of the same. If you are the Author/Copyright owner of this article and want us to remove the same then send an email to admin@blog.restaurant so that we can delete it immediately. We sincerely regret and apologies for any inconvenience caused to you due to the same. Though it is your decision but please take note that the link to your website and the article have been given above, within and on the bottom of the article.